Kantian-Buddhist thoughts on Romance in the Recession

Kantian-Buddhist thoughts on Romance in the Recession February 14, 2009 Justin Whitaker 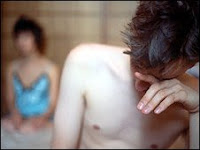 A story in today’s BBC News suggests that in down economic times, romance gets a boost.

“Times of stress can trigger feelings of attraction – quite simply, you’re more susceptible,” she said.

Professor Fisher’s theories are based on a classic 1974 study by Dutton and Aron – in which male subjects walking across a dangerous-seeming bridge were found to be more likely to fall for an attractive woman researcher.

(I love that academics get paid to come up with such studies.)

In any case, it turns out that dating websites and sex-toy shops are booming with business, and a quick survey of jewelers that I happen to be dating (just one) suggests that business is booming in that sector as well. So it’s not just that the down economy is spurring cheap alternatives, people are going out and paying big bucks to stimulate their love-life. (however, it’s worth noting that jewelry sales were down at Xmas, suggesting that perhaps that particular holiday is more expendable in the down economy)

But the down economy isn’t all good news for amorous couples.

Denise Knowles, Relate sex therapist, said: “Economic uncertainties can cause people to become more anxious – with the added dimension of people trying to get another job, or working longer hours to cover for a partner who has lost theirs.

“In the end, they are simply less likely to want sexual activity at the end of a long day.”

And, in another brilliant study:

But how do we make sense of all these studies and reports? In the end, the BBC writer suggests open communication and, that failing, therapy. That seems like a fair solution to most of contemporary life’s maladies.

But are there better ideas?

First we need to understand the roots of human motivation. For the most part, people chase after happiness in the form of fulfilled desires (see my last post for some background). In the last ten or so years, the economy has been booming, so people had ample opportunity to have desires fulfilled by earning and spending fists-full of cash. In the last six months, on the other hand, the prospect of fulfilling desires through merely economic means has faltered. So, humans being humans, we turn to the next best place: romantic desire fulfillment.

Perhaps now we’ll see a boom in online dating-site traffic as people search for the ideal love to fill the void of the lost ideal job. But once the economy straightens out, humans being humans, we’ll go back to neglecting one another in pursuit of easier pleasures: selling ourselves to corporate giants for money and things and adventures. And even if the economy continues to spiral down, people will eventually realize that romance is also ephemeral; relationships take work.

Now, a fair portion of us aren’t on this treadmill. Perhaps we possess some great wisdom. Perhaps we didn’t chase the money in the boom times and the recession simply hasn’t hit us in a stress-inducing way (I’m in that category).

For both Kant and Buddhism, the problem (in general with humanity) is in where we find our self-worth. The outside world of desire-fulfillment, whether in money, status, fame, or romance, is fickle. If we place our sense of worth in our job or relationship, we’re doomed to eventual disappointment. We don’t even need to lose our job or partner for suffering to arise: as we can become so defensive and protective of either that the slightest problem or insult can cause worlds of distress.

Our self-worth should instead be firmly rooted in our recognition of ourselves as moral agents. We are (potentially) agents of pure goodness, selflessness, generosity, and wisdom. This is our Buddha-Nature, or for Kant our dignity. This is not incompatible with being wealthy and having a wonderful romantic life, but it is a very different sphere of evaluation. We can be poor and single most of our lives and yet, by this measure of a good life, be a great success. While neither demanded it of all people, both the Buddha and Kant were quite poor and celibate most of their lives by choice.

Placing our self-worth in our own moral/spiritual development, we are ever-more able to weather the storms of the outside world. The economy will falter, our partners will let us down as we will them, and life will go on. We can hold on to the good times, but only with an open hand. When life shifts, we must allow it and move forward instead of grasping to the past. Living with generosity in the good times, we can hope for the kindness and support of others in our troubled times.

Are we guaranteed support? No. Not in this lifetime at least. But for Kant this was reason to believe in some higher power that would dole out the happiness we deserve in an afterlife. And for Buddhists it is why karma makes so much sense. For those who believe in neither, it can still be reason to find meaning in simply cultivating virtues, living with goodness when it is easy to see the ‘success’ of those who choose to compromise their morals.

February 15, 2009 In Memoriam: Bristol's Bodhisattva
Recent Comments
0 | Leave a Comment
"I've read that borderline persons have a high sense of fairness and BPD is soooo ..."
steven solomon Borderline Personality Disorder and Buddhism (IV)
"I came across this site by accident, It reminded me of a story about two ..."
quacknduck Tourists: Buddha Tattoos are Taboo; as ..."
"eMudhra Limited is a certified body, licensed by the Government of India. eMudhra operates in ..."
Mycaportal Buddhism: Dzogchen and Mahamudra
"folks hav to learn the local laws wen they invade the space"
Joe Biggs Tourists: Buddha Tattoos are Taboo; as ..."
Browse Our Archives
get the latest updates from
American Buddhist Perspectives
and the Patheos
Buddhist
Channel
POPULAR AT PATHEOS Buddhist
1