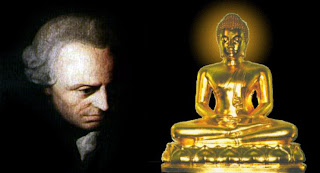 Part of my MA dissertation some four years back was a defense of Kant as a potential interlocutor for Buddhist ethics in the current age. Kant, I came to discover, is a mysterious figure.

First of all, Kant was a systematic thinker. That is, he was concerned not just with one aspect of philosophy or another. He knew that ethics must be grounded in metaphysics, which must be grounded in epistemology, which required intimate knowledge of anthropology, and so on. Nothing was to be left outside his thought, for all must be accounted for in true philosophy.

The problem that arises comes

not from Kant, but from his interpreters. These brave men and women are usually specialists in but one of these fields and thus examine Kant with exceedingly narrow perspectives. Such interpreters are similar to the proverbial blind men and the elephant, none recognizing the elephant for what it is and all disagreeing about what they’ve found. I sometimes think of them as scientists with a rubik’s cube, each of them looking ever-so closely at just one face of it, arguing about the colors it displays and ultimately, “what good is it, anyway?”

The Irish philosopher and Baroness Onora O’Neill is one of a handful of contemporary students of Kantian thought striving to rehabilitate us from 200 years of Kant-bashing. Another great is Stephen Palmquist, who works in Hong Kong, notable for his “3-perspectives” approach to the Kantian corpus. (he is also organizing the first ever Kant in Asia conference later this month)

These thinkers, and others, see that Kant must be read as a whole. This is contrary to many early (and current) interpreters as well, perhaps, as the style of Kant himself. His writing style suggests an isolated, chunk by chunk aproach to the world, sectioning off and examining closely before moving forward with each step. But a close reading of his early and later works suggests that this isolation and technical examination was always in service of a broader, humanistic and ethical program.

So when we hear that Kant is dry or that his ethics are ’empty formalisms’, we can only say that this is a case of ‘gotcha philosophy’ a swiftboat distortion of the facts using the facts themselves.

If we read Damien Keown’s 1992/2001 “The Nature of Buddhist Ethics” we find one such swiftboat attack, coming from Aristotelian philosopher, J.M. Cooper, who says ‘Aristotle…does not think of moral constraints themselves as imposed on persons without regard for (and even despite) their own good, as Kant…tends to do.’ (p.202) Interestingly, Keown states the Kantian position more correctly elsewhere in his book,‘The relationship between kusala and puñña constitutes the summum bonum of Buddhism in a manner similar to the way in which the conjunction of virtue and happiness is understood by Kant’ (p.126). If we accept Keown’s analysis here it seems that we must reject Cooper’s claim about Kant.

Ironically, this treatment of Kant is much like the Western reception of Buddhism, in which it has been branded as nihilistic, romantic, mystical, atheistic, and so on. As with Kant, the enormous corpus of Buddhist writings makes it easy to cherry-pick those that agree with our temperments or prejudices (either favorably or unfavorably). I cannot claim a comprehensive knowledge of either, but I can say that my experience of both has taught me to be extremely suspicious of “extreme” interpretations of either. And by extreme I mean those interpretations that would have us ignore a significant body of the material. To consider Kant dry and ’empty’ for instance we must ignore his anthropology and work on virtue. Various accounts of Buddhism dismiss it as a philosophy of pessimism – ignoring the 3rd and 4th noble truths, or as rational and empirical – forcing us to ignor or dismiss mytho-cosmological aspects of the texts.

It is perhaps our all-too-human tendency to swing to extremes. It is also perhaps our laziness that urges us to simplify and dismiss other people’s world-views. But a middle way forces us to read sympathetically the lives and thoughts of others, to neither demonize nor bow before any other.

May 3, 2009 Race Day
Recent Comments
0 | Leave a Comment
Browse Our Archives
get the latest updates from
American Buddhist Perspectives
and the Patheos
Buddhist
Channel
POPULAR AT PATHEOS Buddhist
1