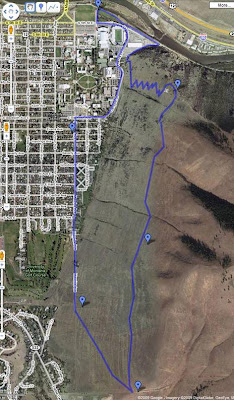 There’s little out there to put you in touch with interconnectedness like running. Add steep inclines, old guys running circles around you, steep declines and a body with a few extra pounds and dukkha becomes a central lesson as well.

This morning I ran an unofficial version of the Pengelly Single Dip. I had planned to run the official version, but must have been smoking something when I checked the date (it was yesterday). So I had the options of going back to sleep or running the race on my own. Oddly enough, the decision to run it on my own was easy. I’d studied the map (recalling the discomfort of my last sanctioned run) and I was on my way.

Anatomy of the Race:

I started at 8:35 at a modest pace along a flat trail – the start and finish are the blue dot at the top of the map. Just before I set off an older guy passed by me. From his face and white mustache I’d guess he was in his 50s, but he was built like a 26 year-old Olympian, decked out with all the gear of a serious runner. My pace brought me closer and closer to him in the flats until, after half a mile and at the base of Mt. Sentinel’s “M” trail, I passed him. We exchanged friendly greetings and I was on my way.

The “M” trail is a series of 14 switchbacks, varying in length and grade. I managed to run the first one, a long, relatively flat stretch. After that I alternated running and long-stride walking until I was over the “M”. Along the way the old guy caught up; he had been using the same technique, going a bit faster.

This time he said I had a great pace “for my size” (was he calling me fat? No… Just ‘big-framed’).

I joked that I had some extra on the belly to lose and then I’d be fine and he laughed and replied, “don’t we all?”
“Are you training for something?” he asked.
“Yea, maybe the marathon, but we’ll see.”
“I’ve got a 52 mile trail run next week,” he informed me.
“Nice,” I thought to myself, “this guy probably has grandkids boppin’ on his knees one weekend and is off running ultra-marathons in the mountains the next.”
What I actually said was, “Wow, good luck!” to which he smiled and said thanks as he resumed his running.

Above the “M” was 1.5 miles according to my pedometer; .5 on the flats and 1 mile of climbing approximately 600 feet of vertical. At that point my friend was a good 150 feet ahead of me and my legs felt like jelly, perfect for the downhill.

Now you’d think downhill would be nice at this point, perhaps relaxing even. But no. It’s brutal. You need to negotiate two opposing forces: speed and control. I manage to find balance by speeding up until I can feel the impacts in my mid-back, then tilting a tiny bit forward and maintaining that posture and speed.

I read a book about 2 years ago on “Chi Running” that taught something like a holistic method for running. “Remember the pure joy of running as a child?” it begins – or so I remember, “and the Kenyans who seem to effortlessly sprint the Boston marathon each year?” And then think of all the middle-aged pudgy Westerners lumbering along like drunken, two-legged rhinos on your local tracks. What’s the difference? “Tilt.”

It sounds crazy, and maybe it is, but learning the right tilt when running – leaning forward a bit at the hips (NOT the midsection) – is supposed to engage the big back muscles going all the way up to your shoulders. Running like a rhino, chest puffed and neck back, makes the legs do all the work. No wonder it doesn’t look like fun.

I’ve tried since then to run like a kid, to tilt, to have fun, and it’s worked pretty well thus far.

At about 2.5 miles (approximately the second blue marker above, mid-mountain) the road is relatively flat and the joy of simply running, neither struggling up nor struggling not to fall down, gives an extra boost of energy. The ultra-marathoner is now about 300 feet ahead of me and my competitive spirit desperately wants to pass him again. But to no avail. He’s at a good pace and my legs tell me they aren’t sprinting at this point, even for a couple hundred yards.

At 3.5 miles I finally reach the turn-around point and I’m deeply suspicious of the organizers’ claim that this is an “about 5 miles” run. Here the downhill is at times precarious. I allow myself to reach a break-neck, childlike (foolish) pace and then try to slow down. I begin by putting my arms out like an airplane, thinking perhaps the wind-resistance will help. It doesn’t. So it’s out with the graceful strides and in with hard steps, each one pounding my foot into the ground.

Just as I learned that the shoulders and knees are intimately connected on the gentle down-slopes, here I’m finding new connections. My love-handles have found my rhythm and are tugging sharply downward with each pounding step. And with them are my eyelids (who’da guessed?).

Finally at 4 miles I check the time: 40 minutes, not bad. By then I was nearly off the hill and onto city streets, and more importantly, the flat. My pace picks up and steadies and it’s easy-going for the last two miles.

Stretching at my car, I see the old guy approaching again on the same trail where I first encountered him. We share waves and he congratulates me again for my pace as he jogs on by.

It’s a joy to see what my body will put up with and a joy to see others enjoying theirs to the fullest as well. Like our minds, the body is a muscle: treat it well and use it and it will do amazing things. The effort must be smart, don’t overdo it. But it must also be sustained, don’t get distracted or discouraged.

Our spiritual lives are the same, they require steady work or they will stagnate. And sometimes the work is unpleasant. There will never be a lack of ‘easier’ activities to distract us in this world. But maturity means recognizing that more often than not, the easy activities are the least fulfilling.

June 15, 2009 Zen Noir: A Review
Recent Comments
0 | Leave a Comment
Browse Our Archives
get the latest updates from
American Buddhist Perspectives
and the Patheos
Buddhist
Channel
POPULAR AT PATHEOS Buddhist
1