I’m now in my quaint little room in a hanok (traditional Korean house), sitting on the floor, looking around at gorgeous antique furniture and the total mess that is my luggage. It is the end of a very wonderful day two here in Seoul, and before this was one also wonderful day in Bangkok and before that: Burma. Seventeen days, mostly seeing the “big four” destinations there: Yangon, Inle Lake, Mandalay, and Pagan.

Unraveling the full experience of Burma may take some time, but suffice to say it was a place I will never forget and one which I truly hope to return to. And my desire to go back has nothing to do with tourism, it is rather completely a wish to help and to learn. It is a country of such amazing culture and people and history, all of which run a thousand times deeper than the political situation that hangs over them now. And it is that depth that allows them to smile so much – soooo much.

And yet, due to the difficulties of the last sixty years, the health, financial, and educational systems in the country are all in shambles. Such basic things that most of us take for granted just aren’t there. Life in so many ways is unnecessarily difficult, and they know it, and they know it can be different (just leaving the airport in neighboring Thailand and seeing the modern infrastructure, cars, and so on made this overwhelmingly clear to me). And yet they also know well the consequences of asking for change: harassment, jail, or worse. So they smile, change topics to the joyful things in life – of which there are plenty here, and carry on all the same.

If anyone is frustrated with things, it is usually the naive tourist – demanding that everyone should have democracy and that’s that. But of course things are more complex than that. To begin, the country did have democracy, briefly, after the British left in the late 1940s. However, largely due to the late night, whiskey driven British map making, the country that would become Myanmar is in fact a conglomerate of eight nations and countless more ethnic and tribal groups that have little, if anything, holding them together under one flag. And so as tensions quickly arose and threatened to become complete civil war, the military stepped in, providing a (widely believed) necessary security to hold the young country together.

Since then, the military has numerous times taken a step toward democracy, only to quickly take two steps back. Most recently, last year they again released “the Lady,” Aung San Suu Kyi, and created something like a legislative body of the government – supposedly separate from the military, but most would say just a puppet-like extension of it. Nonetheless, the people who love this country, including myself, are hopeful. And of course, I have been glued to the news, at least in bits and pieces, as the events in first Tunisia and now Egypt have unfolded.

But enough of that for now… Here are a few photos from my first two stops in Burma, Yangon (Rangoon) and Inle Lake. 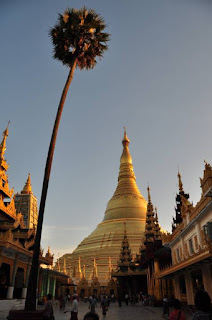 At the Shwedagon Pagoda, Yangon. 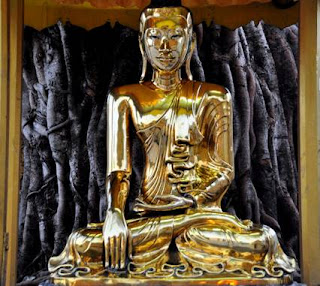 Also inside the Shwedagon, one of the bronze Buddhas with a Pipal tree behind him. 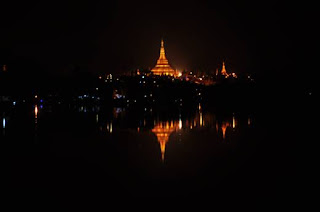 A view of the Shwedagon at night from Kandawgyi Lake, Yangon. 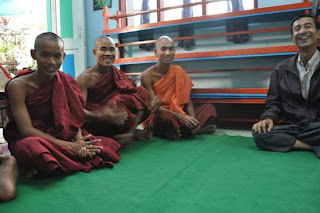 Some friends, monastics and a retired naval officer, from Yangon. 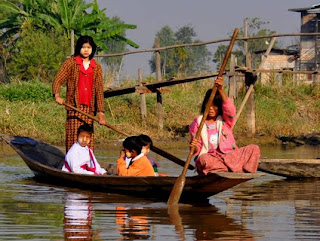 A family out on Inle Lake. 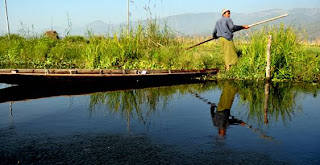 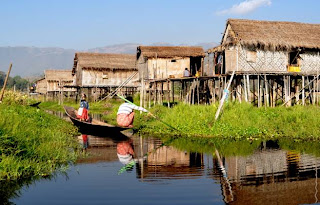 And some of the houses, literally out in/on the lake. Many of the villages around the lake are built either on tiny mud islands or simply over open water near the shore of the lake, traveling around completely by way of these dugout canoes. 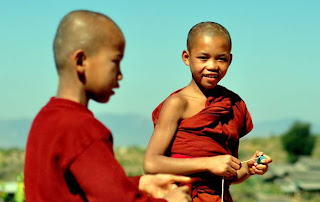 A couple young monks I came across at a tiny temple in a tiny village just outside of Inle lake.
More on all of this – and Bangkok and Korea – as I catch up on sleep, email, photo editing, etc…

February 5, 2011 In the face of fear: Buddhism, Burma, Egypt, politics, and the modern world
Recent Comments
0 | Leave a Comment
"I've read that borderline persons have a high sense of fairness and BPD is soooo ..."
steven solomon Borderline Personality Disorder and Buddhism (IV)
"I came across this site by accident, It reminded me of a story about two ..."
quacknduck Tourists: Buddha Tattoos are Taboo; as ..."
"eMudhra Limited is a certified body, licensed by the Government of India. eMudhra operates in ..."
Mycaportal Buddhism: Dzogchen and Mahamudra
"folks hav to learn the local laws wen they invade the space"
Joe Biggs Tourists: Buddha Tattoos are Taboo; as ..."
Browse Our Archives
get the latest updates from
American Buddhist Perspectives
and the Patheos
Buddhist
Channel
POPULAR AT PATHEOS Buddhist
1