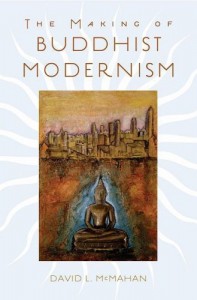 I finally read David McMahan’s book, The Making of Buddhist Modernism, over this last week or so. I have pretty mixed feelings about the book, and the few scholars I’ve discussed the book with have largely concurred. On the one hand it is a “must read” because of its sweeping scope and rhetorical force. It really has many more positive things I could say about it than negative. On the other hand, it shouldn’t be taken as gospel – at all. Dealing with so many disparate areas of thought, the treatment of any in particular is necessarily limited. If you’re not careful you will come away thinking you know a lot more than you actually do. So while I could write a lot about what I liked about the book, I’ll simply link to some other excellent reviews at the bottom and give you a few words of caution.

A case in point: my own history with the book goes back to when I was advising a bright undergraduate student who had studied Buddhism and wanted to write about Buddhist Environmentalism. Great, I thought, I’ve done a fair bit of work in Buddhist environmental thought. I recommended he look at Peter Harvey’s chapter on the environment in his great work on Buddhist Ethics along with three or four books devoted to Buddhism and the environment, such as Buddhism and Ecology (my first Buddhist Studies professor, Alan Sponberg, has an excellent article in that volume). The student came back to me later a bit disappointed. He said he wanted to read more about how German Romantics such as  Schelling, Schlegel, and Schleiermacher and the American Transcendentalists Thoreau and Emerson had shaped Buddhist environmental thought.

I don’t have my copies of Buddhism and Ecology and other such works handy now, but I don’t think the German Romantics or American Transcendentalists played much of a role in the articles in any of those works. As a philosopher and (increasingly) a historian of Buddhism, I have learned and advised my students to carefully study of the source materials and the contexts out of which they evolved. The Pali texts have some good starting points for environmental thought, as do many East Asian writings. I asked my student what he had been reading to make him think that the Romantics and Transcendentalists were so important. It was The Making of Buddhist Modernism.

At times, McMahan is careful to note that both Buddhism and Modernism are very vague categories and that he is at best giving a rough sketch of a difficult religious phenomenon (Buddhist Modernism), which is, after all, still emerging. At other times, though, he makes connections between Buddhism and Modernism that are fairly tenuous. Here is one example:

The Transcendentalist category of “Universal  Religion”—which was believed to transcend the bounds of time and place and to consist of personal experience rather than dogma, ritual, and the specificities of culture—provided a vast arena into which promoters of Buddhism could easily introduce its ascetic, hermitic, and meditative traditions, along with the East Asian reverence for nature. These factors influenced how westerners understood Buddhism, as well as the shape it would take in the modern world. (p.168)

Why the Transcendentalists? Handn’t Spinoza advocated similar ‘space and time transcending’ religious ideals? And Kant? And Hegel? And Christian Mystics?

A problem is that Buddhist thought is so multi-fasceted and so varied over its 2500 years and numerous geographic contexts – and so is Western thought, even in just the past two or three hundred years – that one could pretty easily pick and choose aspects of each that seem to fit together. And no doubt Westerners have been doing just this. And no doubt many Buddhists -East and West- have borrowed from the Romantics, Transcendentalits, scientific thought, Western monotheism, Kant, Nietzsche, The Beatles, and Britney Spears, to name a few!

When a contemporary Buddhist such as Thich Nhat Hanh says:

We classify other animals and living beings as nature, acting as if we ourselvesare not part of it. Then we pose the question ‘How should we deal with Nature?’We should deal with nature the way we should deal with ourselves! We shouldnot harm ourselves; we should not harm nature . . . Human beings and natureare inseparable. (Eppsteiner, 1988: 41; quoted in Peter Harvey, 2001)

we might say that he is responding to the same problem as Romantics (and, indeed, many others who have confronted this problem), but some serious work would need to be done to suggest that he is in any way ‘influenced’ by Romanticism or any other particular aspect of Western culture. Indeed, checking Peter Harvey’s chapter on Buddhist “Attitude to and treatment of the natural world” we find no mention of Romantics or Transcendentalists.

But I fear that many readers will come away from The Making of Buddhist Modernism thinking that Romanticism in particular has played a major role in the development of (all) 20th-21st century Buddhism (McMahan doesn’t spend much time discussing counter-examples, i.e. traditional Buddhism in the East or West, which continues to this day). Again, I don’t think this is McMahan’s fault – he does give caveats – but this is nonetheless how many Buddhist enthusiasts will read the book. Sentences like this don’t help:

Suzuki is clearly drawing from psychoanalytic theory, and perhaps from the Romantics, when he declares, like Schelling as well as Jung, that the unconscious is the seat of creativity. (p.131)

Perhaps, sure. As a writer in 20th century Buddhism, Suzuki is borrowing English words that Romantics and psychoanalysts also use(d). But the ideas expressed can be traced to early Buddhism to some extent and more clearly to the Yogacara school of Buddhist philosophy which had such a strong influence on Zen.

If you are a scholar or well-versed practitioner, you know this. If not, you might interpret the above as saying that Suzuki is borrowing ideas from Romantics and psychoanalytic theory (“drawing from” is perhaps purposefully vague). Elsewhere McMahan is careful to note that Suzuki never directly states any such influence or borrowing and it is unclear whether he read the Romantics at all (p.122).

McMahan runs a risk of perhaps being considered a sort of neo-Orientalist when he writes:

The various pictures of dependent origination, samsara, and the natural world that emerge from South and East Asian canonical texts do not themselves provide sufficient material to account for the ways the concept of Buddhist interdependence has developed in recent decades. (p.162)

I doubt he’s being Orientalist, suggesting that Asians couldn’t have come up with these interpretations on their own because they lacked the philosophical materials for them. But rather, he is making the almost banal point that some Buddhists today borrow from outside the South and East Asian contexts to form new interpretations. It’s somewhat banal because Buddhists have always done this. On the other hand, I might only find it banal because I’ve been steeped in critical thinking and inquiry and the rule never to take -even Buddhist- claims at face value (many thanks to my early teachers).

That said, I do agree with Roger Jackson, who wrote of the book that, “This sweeping and sophisticated analysis of the ways in which westerners and Asians alike have constructed new forms of Buddhism under the pressures of modernity is thoroughly disillusioning, in the best sense of the word.” For those who have been fed Buddhism spiced with various aspects of Western thinking as if it were the same thing being taught and practiced in Asia, this book will be just the treatment needed.

I think it’s a book to be read, but with a critical eye. The forces McMahan describes do indeed play a role in some contemporary Buddhism, and if you are a practitioner this book may help you see those more clearly. Just as with each political, economic, or geographical shift in Buddhist history, the teachings have struggled to both maintain their connection to the past and to adapt to new circumstances.

But be careful not to over-do it. I’ve been to many Lamas and Bhantes who I’m quite confident could talk about the unconscious or creativity without the slightest reference to or influence from Schelling or Jung. If you keep McMahan’s caveats and the necessary vagueness of the subject area in mind as he suggests, you can get a lot from this book. If you get too wrapped up in McMahan’s very good writing and his attempt to make a strong case, you might forget that there is a lot of Buddhism (both current and past, East and West) that doesn’t fit at all into the picture that McMahan paints of Buddhist Modernism.

I highly recommend the academic reviews below as well as the two podcasts.

And out in the blog-world:

http://www.thesecularbuddhist.com/episode_072.php (a podcast via the Secular Buddhist)

http://newbooksinbuddhiststudies.com/2011/09/02/david-mcmahan-the-making-of-buddhist-modernism-oxford-up-2008/ (another podcast, with Amod Lele)

And, just for fun:

November 29, 2011 Thanksgiving, American Buddhist (in England) Style
Recent Comments
0 | Leave a Comment
"https://www.theguardian.com..."
Donalbain Vaccines, Pharmaceutical Companies and the CDC
"I've read that borderline persons have a high sense of fairness and BPD is soooo ..."
steven solomon Borderline Personality Disorder and Buddhism (IV)
"I came across this site by accident, It reminded me of a story about two ..."
quacknduck Tourists: Buddha Tattoos are Taboo; as ..."
"eMudhra Limited is a certified body, licensed by the Government of India. eMudhra operates in ..."
Mycaportal Buddhism: Dzogchen and Mahamudra
Browse Our Archives
Related posts from American Buddhist Perspectives