A Buddhist Perspective on World News

A Buddhist Perspective on World News May 20, 2012 Justin Whitaker 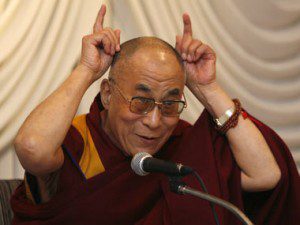 As before, a wrap-up of news in the world from my Buddhist Perspective. Your perspective, on these or other stories, is always welcome in comments section.

First, a couple stories from my side of the pond (England). Last Sunday, as mentioned, the Dalai Lama was awarded around $1.7 million and promptly passed it on to others, saying something about his empty pocket maybe being upset with him, but otherwise trying to make the world a better place. Typical Dalai Lama awesomeness in words and deeds. (photos here)

Meanwhile two sources of anti-Dalai-Lama-ism persist: namely the Chinese government and strange groups of “Buddhists.” In China, TV stations aired a documentary suggesting that the Dalai Lama himself is responsible for the many recent self-immolations in Tibet (a nation controlled by China ever since 8 years of war and occupation drove the Dalai Lama to India). India, by the way, was the recipient (via the charity “Save the Children”) of about $1.5 million of those dollars the Dalai Lama was awarded last Sunday. So the Dalai Lama wins, India wins, and China… eh.

The “Buddhists” or in this case “non-Buddhists” are actually old news (and not the NKT), but the story about the Dalai Lama winning the money based on his commitment to dialog at the intersection of religion and science reminded me of the very odd article/blog post called “Fanged Dialog” which begins, “All X-Buddhisms are incapable of genuinely conversing with the sciences and the humanities.” It gets even weirder after that. Be sure to read the About, Warning!, Before you Read, and Before you Comment, pages before you read or comment.

Today, not too far away from St. Paul’s where the Dalai Lama was last week, Stephen Batchelor and Don Cupit will be debating the relevance of supernaturalism in religion (Buddhist and Christian at least). Andrew Brown of the Guardian questions whether supernaturalism is needed, and in the end suggests that either way, they’re not likely to ever get the kind of audience – and thus effect in the world – that someone like the Dalai Lama has. I’m quite a fan of Batchelor, and wish I could have seen him today. But, alas, I was busy here in Bristol with my 10k charity run (I reached my humble fundraising goal, but you can still donate).

Speaking of running, NPR had an interesting article on long distance runners and the ability to withstand pain. I don’t run that far (26.2 miles being my longest run to date), but I’d like to one day, and I’m intrigued by the mind-body (and thus to an extent spiritual-scientific) aspects of running.

Meanwhile the President’s announcement of his support of Gay Marriage continues to make ripples, notably in African American communities. The very good news yesterday was that “the NAACP’s board of directors voted Saturday to endorse same-sex marriage…”  I hope this is a topic that Buddhists (amongst others) can rally around in the coming political season.

In getting back to specifically Buddhist news: gambling and drinking monks in Korea have made quite a name for themselves in the last week or so.  According to the Arizona Informant:

The recent scandal involving gambling Buddhist monks could not have erupted at a worse time for the proponents of spreading Korean Buddhism globally.

Modern Korea is not a predominantly Buddhist country, but the nation has practiced and nurtured its own brand for more than 1,700 years after adopting it from China. Compared to Buddhism in other Asian countries such as Tibet, Japan or China, Korean Buddhism has largely remained inside the country.

Some insiders are worried that the latest scandal may taint the image of Korean Buddhism and hurt its already meager international presence.

“This story about the monks engaged in high-stakes gambling has been widely reported in the Western media,” Robert Buswell, a renowned scholar on Korean Buddhism told The Korea Times.

Korean Buddhism, like others in Asia, isn’t monolithic. And like Buddhism in China, Japan, and Taiwan, Korean Buddhism has seen a rise in different beliefs and forms of practice emerging in many ways from their encounters with the West in the 20th century (and earlier). Perhaps a positive outcome of this will be increasing public understanding of the many different faces of Korean Buddhism today. Meanwhile, as with religious – in particular Buddhist – groups elsewhere, we can hope this will bring renewed calls for financial and leadership openness.

Speaking of which, one area we had hoped to see more openness about was the death of a Tibetan Buddhist practitioner in the desert in Arizona. My post on that has drawn in very helpful and informative comments (thank you all who have commented), and the original story, broken at Elephant Journal, has even more.

The first, and only that I’ve seen, journalistic piece on the story comes from a blog on the Phoenix Sun Times, posted here.  The article does a great job of recounting the events, concluding (after discussing the letter posted by McNally’s caretakers trying to clarify what they knew):

This raises more questions, such as why she didn’t call for help sooner. McNally was delirious, sick and had lost track of time for “days” before the rescue — but managed to upload her diatribe to the Internet on April 19.

We’ll let you know if we find out anything else.

Diamond Mountain University, for there part, has said nothing more. They have, curiously, altered their board of directors page (I don’t have screenshots of the previous versions, but I seem to remember two or three more people on there) and completely removed McNally from their Lineage and Roots page. Such actions don’t really resonate with a sense of support and concern for a woman whose husband just died during one of their retreats (okay, he was officially kicked out at the time, which raises other issues, but still). Where does this leave McNally in relation to Diamond Mountain, which she is still (as of now at least) credited with cofounding with Geshe Michael Roach?

And ending on an upbeat note. One of the most amazing and inspiring people I have ever come across is David Suzuki; you can read my review of a movie about him here. Next month his foundation is hosting a 30×30 challenge:

I fully plan on taking part and hope you do too.

May 22, 2012 Angry Asian Buddhist interviewed
Recent Comments
0 | Leave a Comment
Browse Our Archives
get the latest from
American Buddhist Perspectives
Sign up for our newsletter
POPULAR AT PATHEOS Buddhist
1