American Buddhism in the News

My apologies for being out of touch lately – with travels, study deadlines, and life in general, I’ve had a very full plate. I hope to be back up to speed quickly.

And there is a lot to catch up on. This Tuesday, while I was in London for a meeting regarding my phd, two of the most amazing people in the world were meeting (for the first time, I believe) in that very city: H.H. the Dalai Lama and Daw Aung San Suu Kyi. 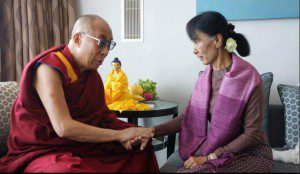 But more on that and Tibet and Burma (Myanmar) will come soon.

First, to American Buddhism, which has been in the news of late. Shortly after the NYT story about the death at Diamond Mountain, Geshe Michael Roach’s ‘University’, ABC’s Nightline aired a segment as well. Clearly there are lessons that need to be learned from this. Hopefully a weariness for charismatic teachers promising the moon will find its way into the fabric of American Buddhism so that deaths like this will not happen again. Lama Surya Das, one of Americs’s best known Tibetan Buddhist practitioners and teachers, even recently provided a (somewhat tepid) discussion of the topic.

In more general American Buddhist news is the guest blog by William Wilson Quinn (Buffalo Bill?) at the Washington Post last week. The post, which suggests the emergence of new Western form of Buddhism based on the ‘core teachings of the Buddha’ and free of ‘culture-based ceremony’ stinks of shoddy orientalism. Quinn is listed as a ‘scholar of Buddhism’, but the piece lacks any cultural context for American Buddhism. Mumon and Arun’s critiques are far more enlightening than the article itself.

A second opinion piece comes from James Atlas in the New York Times, and is called “Buddha’s Delight.” It is basically an account of his brief retreat and, aside from identifying Allen Ginsberg and Jack Kerouac as “among [the] early American proponents” of engaged Buddhism (that’s certainly news to me) and referring to Jewish converts to Buddhism as “Juddhists” instead of the popular “JuBu“, it seems innocuous. But at the same time I didn’t find it terribly illuminating, either. It has been a few years, but it reminded me a tiny bit of Dinty Moore’s book The Accidental Buddhist, about a journalist who tries out various Buddhist practices. The book, as I recall, was much better.