A Careful Walk through the Spirituality Minefield

A Careful Walk through the Spirituality Minefield August 17, 2012 Justin Whitaker 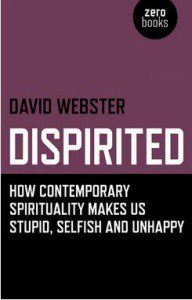 Or, a review of David Webster’s “Dispirited: How contemporary spirituality makes us stupid, selfish, and unhappy.”

Webster teaches Religion, Philosophy, and Ethics not far from me and as a fellow traveler on the road of Buddhist studies (Webster’s fist book is on Buddhism and Desire) and philosophy, I have been looking forward to reading this book for some time. At just over 70 pages, it’s written as a pamphlet almost, perhaps a manifesto: light on footnotes, jargon, and the kind of verbiage that can turn a lot of people off from intelligent writing. I highly recommend it.

That said, it may come as no surprise that the book seems to have been misunderstood by some readers. Perhaps this is due to its polemical opening words:

When someone tells me that they are not really religious, but that they are a very spiritual person, I want to punch their face. Hard.

Not exactly the best way to make friends. But Webster does explain. The problem is confusion: his own. Religion for him is deeply spiritual, and spirituality is inseparable from religion.

Thus the book reads less like an attack on ‘spiritual’ life (which Webster notes is multifaceted and not always pernicious – e.g. in Pierre Hadot’s “Philosophy as a Way of Life“) and more as an exploration of and ultimately an attack on a very pernicious marketplace of spirituality in the contemporary world. The problematic notion of spirituality is narrowed, in developing detail, to the kind of superficial, non-committed, materialistic nonsense which so often surrounds people proffering the above violent-desire-producing phrase.

In fact, despite his committed atheism, Webster praises traditional religions for fostering the kind of commitment and consistent challenge to be better people that is all too lacking in the flakier regions of contemporary spirituality. As part of this, Webster advocates ‘following a faith which makes you uncomfortable – and which is hard to believe, challenges your desires and goals for your life and asks more of you that you ask of it’ (p.3). Alongside our faith (or lack thereof), Webster describes the need for ‘the active promotion of philosophy, of genuine, judgmental, critical faculties which allow people to discriminate with regard to truth claims’ (p.74).

This is the heart of the book, and a damned good heart it is. The spirituality he derides is closely tied to a communal, social, and political laziness rampant in modern society. Spirituality – divorced from its institutional context in this way – can become a pernicious preoccupation, leading us away from the engagement with the world that engenders meaning and purpose in our lives. In fact, Webster suggests that certain discourses of spirituality today ‘are a form of poison that taints not only critical and social realms, but also does violence to our potential to be authentic, happy(ish) and fulfilled human beings’ (p.6).

In the end, Webster hopes to spur spiritual seekers and the other walking-dead out of the foo-foo isle of the bookstore and into some sort of real engagement with the world around them. In a long, but too-good-not-to-share quote, Webster sums up the situation today:

I was listening to the song (by Finnish Black Metal band ‘Impaled Nazarene’) We’re Satan’s Generation, in which they style themselves as ‘not giving a fuck’, and thinking that actually, despite the band’s insistence, they are nowhere near as malign as a shopping centre full of consumers. These consumers, buying sweatshop produced goods, driving four wheel drive SUVs, picking a little Buddha statue maybe, apolitical and not committed to anything at all – they truly ‘don’t give a fuck’: Satan wearing chinos and a casual jacket, his arms heavy with goods, his conscience cleared by a post-ideological levity of thought, supplemented by feel-good spirituality. Of course, below the chinos, the aftershave and the tasteful display is anxiety: a sore that no new-age balm can really salve – for it is the total, nihilistic meaningless of their life. (p.73)

Here we may say that Webster is losing sight of his origional target of spiritual foofoos as he veers toward English wealthy-ish (chino-clad) youth – but he may simply be drawing them in as a case of the same type of aimless wandering and useless airiness associated with the ‘spiritual but not religious’ crowd.

In the end, as I call to mind many of my friends who are either anxious and chino-clad or ‘spiritual but not religious’, I agree with Webster’s chief worry about the sense of aimlessness and lack of committment so prevalent in today’s society. Spirituality, so often vaguely conveyed, is the heart of that worry in the book. This book should come as a clarion call to all young people to think deeply about their lives and whether or not their beliefs involve commitment and service to society, or whether they simply recycle self-serving platitudes.

In the end, Dispirited (.uk and see also dispirited.org) may be a tough pill to swallow, or it may be an uplifting manifesto for the 21st century. In either case, it’s a must read.

UPDATE: Listen to a sermon from an Australian Baptist church which draws from this book.

August 15, 2012
Buddhism or Buddhisms? The Hegemony of Postmodern Rhetoric
Next Post

August 21, 2012 A Buddhist view on what's new
Recent Comments
0 | Leave a Comment
"I've read that borderline persons have a high sense of fairness and BPD is soooo ..."
steven solomon Borderline Personality Disorder and Buddhism (IV)
"I came across this site by accident, It reminded me of a story about two ..."
quacknduck Tourists: Buddha Tattoos are Taboo; as ..."
"eMudhra Limited is a certified body, licensed by the Government of India. eMudhra operates in ..."
Mycaportal Buddhism: Dzogchen and Mahamudra
"folks hav to learn the local laws wen they invade the space"
Joe Biggs Tourists: Buddha Tattoos are Taboo; as ..."
Browse Our Archives
get the latest updates from
American Buddhist Perspectives
and the Patheos
Buddhist
Channel
POPULAR AT PATHEOS Buddhist
1