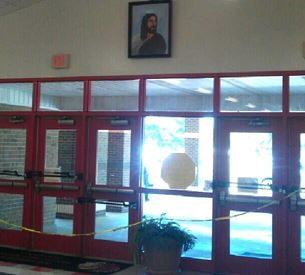 In case you haven’t heard of this story, a sixth grader in a public school was ridiculed in front of classmates about his religion until he was physically ill – by school officials!

The young Asian American Buddhist was told that Buddhism is “stupid” and that he should transfer to a different school with “more Asians” – again, by school officials.

As the ACLU reports, “They also taught creationism in science class, incorporated prayer into class and nearly every school event, hung a portrait of Jesus over the main entryway [pictured here], and participated in a number of other activities that blatantly violated the separation of church and state.”

Among the defendants in the suit, aside from the school board, was science teacher Rita Roark, who taught students that “the earth was created by God 6,000 years ago, that evolution is ‘impossible’ and that the Bible is ‘100 percent true.'”

A test she gave included religious references that included this fill-in-the-blank entry: “Isn’t it amazing what the —————— has made!!!!”

(hint, the only correct answer was “the Lord”)

If you’re frightened that a science teacher is asking students to praise “the Lord” while a picture of Jesus hangs above the entry-way doors, it’s because YOU SHOULD BE.

In a court order, the school board has agreed that these unlawful practices will be discontinued and that the family of the student affected will be compensated $4000 to help cover costs of transporting the student to a new school. These are important steps in the right direction, where people of all faiths in America feel free to learn in institutions of public education. And while, again according to the ACLU, some local (Christian) congregations have supported the family of the Buddhist student, there have also been reprisals, including a group of people wearing KKK hoods shouting, “You fucking nigger Asian-loving bitch.”

These incidents further highlight why it is so important that public schools throughout Louisiana, many of which continue to flout the law in this area, rethink their approach to religious liberty.

Had Sabine Parish proactively sought to comply with the Constitution in the first place, the Lanes would not have been forced to expose their family to such vitriol, harassment, and intimidation simply to assert their fundamental rights. We hope their experience and the consent decree will serve as important tools to educate Louisiana’s educators – public school officials – about real religious liberty.

Real religious liberty includes not only the right to express and practice your faith in school, which the consent decree protects, but also the right to be free from the religious coercion and alienation that occurs when a teacher or other school official tries to impose his or her beliefs during class or school events. Real religious liberty means that every child, regardless of faith, should feel welcome in our public schools. (ACLU)

Meanwhile, as alluded to in the title, Fox News covers the story by taking what USA Today has (which comes from a standard AP text) and cuts off 70% of the story, leaving 3 paragraphs, and readers no doubt wondering what all the fuss is about – because there is no mention of the ACLU, specific abuses by school officials, details of the settlement, or other aspects of the story. To most of us, it is no longer surprising that Fox News puts a spin on most everything, but I thought it might be helpful to note this little “lie of omission” on their part in this religion/Buddhism story. If you’re not going to give the whole story, at least link to it. Don’t give 3 chopped up paragraphs, surrounded by links to other stories, as if to say “we covered it.” 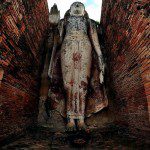 March 13, 2014
Announcement: Master of Arts in Peace Studies Program and Journal
Next Post 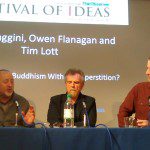 March 17, 2014 Buddhism without Superstition: with Owen Flanagan, Julian Baggini, and Tim Lott
Recent Comments
0 | Leave a Comment
Browse Our Archives
get the latest from
American Buddhist Perspectives
Sign up for our newsletter
POPULAR AT PATHEOS Buddhist
1

The Zen Priest Discovers he is...
Monkey Mind