Jay Michaelson is right, don’t get your hopes up for Tibet

Jay Michaelson is right, don’t get your hopes up for Tibet February 7, 2015 Justin Whitaker

The mere sight of the Dalai Lama smiling brings joy to many of us. Knowing that his smile – and perhaps some sort of influence – is in the same room, and just yards away from, President Barack Obama can doubtless bring a sense of hope for the world. And if not the world, at least the Dalai Lama’s beleaguered homeland of Tibet.

But as Jay Michaelson writes for Salon, “don’t get your hopes up, Tibet.” In his insightful essay, subtitled: “Why Obama’s Meeting With The Dalai Lama Is An Empty Gesture,” Michaelson writes:

Cham is a Tibetan ritual dance, a carefully choreographed ritual meant to bring blessings to the Buddhist community.

The American and Chinese governments have long been engaged in a similar Tibetan ritual dance, also carefully choreographed, but one that has brought no blessings to anyone, least of all Tibetan Buddhists.

Here’s how it works.  American politicians meet and say lovely things about the Dalai Lama, one of the top 10 admired people in the world, but carefully avoid saying anything too overtly political.  The Chinese government reacts with consternation.  Nothing changes.  A year or two later, the ritual is repeated.

In fact, here are excerpts from recent Presidential statements on meetings with the Dalai Lama:

Obama – February 21, 2014: “The President reiterated his strong support for the preservation of Tibet’s unique religious, cultural, and linguistic traditions and the protection of human rights for Tibetans in the People’s Republic of China.”

Obama – July 16, 2011: “The President reiterated his strong support for the preservation of the unique religious, cultural, and linguistic traditions of Tibet and the Tibetan people throughout the world. He underscored the importance of the protection of human rights of Tibetans in China.”

Obama – February 18, 2010: “The President stated his strong support for the preservation of Tibet’s unique religious, cultural and linguistic identity and the protection of human rights for Tibetans in the People’s Republic of China.”

Over the years, Congress has conferred the Gold Medal on many great figures in history – usually at a time when their struggles were over and won. Today Congress has chosen to do something different. It has conferred this honor on a figure whose work continues – and whose outcome remains uncertain. In so doing, America raises its voice in the call for religious liberty and basic human rights.

One of the tragic anomalies of the past century is that in an era that has seen an unprecedented number of nations embrace individual freedom has also witnessed the stubborn endurance of religious repression. American cannot look to the plight of the religiously oppressed and close our eyes or turn away.

I congratulate His Holiness on this recognition. I’m so honored to be here with you, sir. Laura and I join all Americans in offering the people of Tibet our fervent prayer that they may find days of prosperity and peace.

Bush – October 16, 2007: “As I understand it, the Dalai Lama wants not for — he’s not calling for independence from China. He’s asking for the people there to have ability to — the freedom to practice their religion. And the United States supports him as a great spiritual leader. He should be honored as a spiritual leader. But we are not asking for independence from the country.”

Bush – September 10, 2003: “The President reiterated our strong commitment to support the preservation of Tibet’s unique religious, cultural and linguistic identity, and the protection of the human rights of all Tibetans…. The President also declared his strong support for the Dalai Lama’s commitment to the dialogue with China.”

Bush – May 23, 2001: “The President said he would seek ways to encourage dialogue and expressed his hope that the Chinese government would respond favorably. The President also reiterated the strong commitment of the United States to support the preservation of Tibet’s unique religious, cultural, and linguistic identity and the protection of the human rights of all Tibetans.”

Clinton – June 20, 2000: “The President reiterated the strong commitment of the Unite States to support preservation of Tibet’s unique religious, cultural and linguistic heritage and to the protection of human rights of Tibetans. The President and the Dalai Lama agreed on the importance of strong and constructive U.S.-China relations.”

It doesn’t change much, as you can see. (Read the statements in full here, going back to 1991).

As at any ritual dance, all the details were noticed.  On the one hand, Tibet activists cheered that, unlike the president’s three private meetings with the Dalai Lama, this one was public—the first joint public event between the Dalai Lama and an American president since 2007.

On the other hand, Senator Casey went out of his way to note that the Dalai Lama did not have a speaking role at the event.  Indeed, the keynote was delivered by former NASCAR star Darrell Waltrip, presumably a religious figure of greater gravitas.

The president’s remarks, too, were carefully nuanced.  Note that he praised the Dalai Lama not as the leader of the world’s largest occupied nation, but rather as a powerful example of compassion.  The word “Tibet” was never mentioned.

Michaelson’s conclusion suggests that perhaps we can see this as yet another failed opportunity for the Dalai Lama, just one in a long succession, or perhaps we could see this as a PR victory, a showcasing of Tibet’s amazing culture which – despite its tiny numbers and extraordinary persecution – continues to produce humans of such astonishing caliber as His Holiness the Dalai Lama.

If that message – the one of an extraordinary culture built on rigorous philosophical and practical principles, a culture with a message for all of the world*  – can be the message Americans hear, then maybe the prayer breakfast welcome from Obama wasn’t just another round of empty political gesturing.

*Of course that message is contested in itself, not only by China’s government, but by many Western academics. 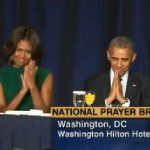 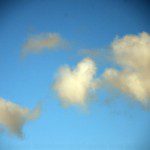 February 9, 2015 A heart-shaped cloud, passing
Recent Comments
0 | Leave a Comment
Browse Our Archives
get the latest from
American Buddhist Perspectives
Sign up for our newsletter
POPULAR AT PATHEOS Buddhist
1