In major cities across the country today activists rose up (and sat) to protest our countries unfair minimum wages.

In L.A. 1000+ protesters chanted “We want 15” or “Sí se puede” as they followed a marching band around a McDonalds. Hundreds more gathered in Berkeley (photos) and across the Bay Area:

These were part of a nation-wide “Fight for 15” campaign seeking higher minimum wages as well as rights to unionize. As the Washington Post states, “Their success would increase family incomes for tens of millions of adjunct professors, fast-food, home care and child care workers, among other underpaid workers. Raising wages would also generate significant savings to state and federal  governments, and allow them to better target how our tax dollars are used.” Read more about the efforts to raise the minimum wage in the nation’s capital here.

Meanwhile, in New York City, The Interdependence Project’s “Sit Down, Rise Up” initiative joined with the Brooklyn Zen Center to bring meditators to “Sit for $15” at protests around the city.

PIX11 reports on the protests here:

For more images of the “Sit for $15” see the IDP Twitter account. A favorite is the retweet from twitter user CTZNWELL which includes IDP meditators and Michael Kink, featured in the video above, from the Strong Economy for All Coalition: 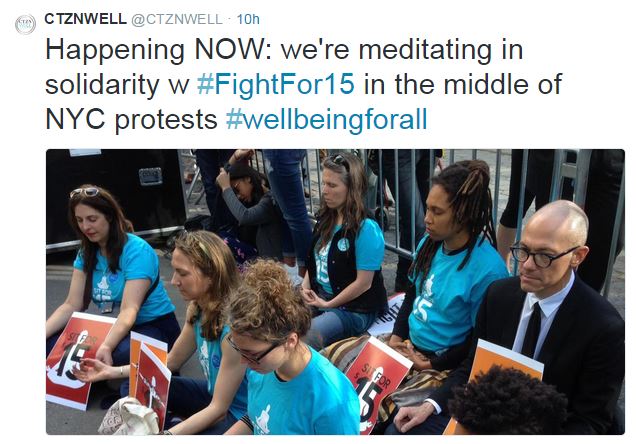 Buddhists, often criticized for lack of social action, are on the front lines of this struggle.

Have you seen Buddhists at “Fight for $15” protests elsewhere? Or at other recent protests? If so, please leave links in the comments below. Thanks!

Meanwhile, in presidential politics, you-know-who (Hillary Clinton) has come out in support of the movement for a $15 minimum wage.

*Correction 4/17/15; mention of the Brooklyn Zen Center was omitted from the original post. 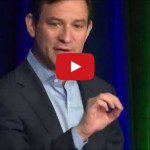 April 13, 2015
Dan Harris on mindfulness, meditation, and Buddhism
Next Post 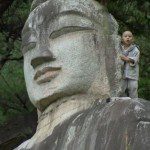 April 18, 2015 Žižek points us to the dark side of Buddhism, again
Recent Comments
1 Comment | Leave a Comment
"Anyone going to point out that your oldest portrayal of buddha... appears to be white... ..."
Scar The oldest datable depiction of the ..."
"This is a thoughtful article. I must admit, after living in crowded Hong Kong, I ..."
Gary Price The Coronavirus is coming – Some ..."
"Well explained. Dholavira is also one of the largest site of Indus Valley civilization. It ..."
Kirti Bajaj Major Sites of the Indus Valley ..."
"Nice write up Justin."
Catalin Newport In Hong Kong, the Bodhisattvas wear ..."
Browse Our Archives
get the latest from
American Buddhist Perspectives
Sign up for our newsletter
POPULAR AT PATHEOS Buddhist
1