With the very sad passing of the great David Bowie, tributes have poured in from around the world. Bowie, as the NYTimes writes, “Transcended Music, Art and Fashion.” Among them a number have noted his youthful connections with Buddhism, which was growing in popularity in the England of the 1960s. Of particular interest is an in-depth blog dedicated to the songs of Bowie, aptly named “Pushing Ahead of the Dame: David Bowie, song by song.” In one post there, the author, Chris O’Leary, recounts Bowie’s early fascination with the Tibet and Buddhism of Heinrich Harrer’s 1952 book “Seven Years In Tibet”:

David Bowie discovered Buddhism in his early teens, thanks to his step-brother Terry’s beatnik leanings, the novels of Jack Kerouac and a few Penguin paperbacks that gave him the basic schematics of the religion. It was Harrer’s book that set him a-boil: “When I was about nineteen I became an overnight Buddhist,” he recalled in 1997. “At that age a very influential book for me was called “Seven Years In Tibet”…[Harrer] was one of the very first Westerners to ever spend any time in Tibet; in fact, one of the very first Westerners actually to go into Tibet and discover for himself this extraordinary existence and this incredibly sublime philosophy.” “Silly Boy Blue,” Bowie’s first Buddhist song, was inspired by Harrer’s descriptions of Lhasa and the Dalai Lama’s winter palace of Potala, the song opening with the yak-butter statues made for celebration days.

– Pushing Ahead of the Dame | Seven Years in Tibet

“I was within a month of having my head shaved, taking my vows, and becoming a monk,” Bowie has said about that period of his life. But, as the story goes, he was torn and so sought Trungpa’s counsel. His reply to the famous young seeker? That he should remain a musician, for that was how he could be of the most benefit.

Writing for the Guardian in 2013, Sean O’Hagen casts doubt on how influential Buddhism was on the young Bowie:

In the mid to late 1960s, he immersed himself deeply, but often briefly, in whatever caught his imagination, whether Buddhism – he went on a retreat to a Buddhist community in Scotland in 1967 – or mime – studying seriously under Lindsay Kemp, his first artistic mentor.

Aligned to all this cosmic adventurism, though, was his oddly old-fashioned attraction to showbusiness, vaudeville and musicals. As the pop-culture historian Jon Savage points out, Bowie’s eponymously titled debut album, released in 1967, is “almost defiant in the way that it contains almost no trace of contemporary pop modes. Despite Bowie’s deep interest in Buddhism, he had no sympathy with the hippy package: the record was a strange mixture of exaggerated, cockney vocals – inspired both by Anthony Newley and Syd Barrett – intricate arrangements and songs that constantly shifted tone and mood, from horror to farce, from Edwardiana to fairytales and back again.”

At the Hollowverse, Tom Kershaw writes that:

Like so many aspects of this man, Bowie is difficult to pin down–even to himself. By his own account, he’s tried about every religion in the book, saying:

I was young, fancy free, and Tibetan Buddhism appealed to me at that time. I thought, ‘There’s salvation.’ It didn’t really work. Then I went through Nietzsche, Satanism, Christianity… pottery, and ended up singing. It’s been a long road.

But in his advanced years, Bowie’s real spiritual views have come out. He said:

I’m not quite an atheist and it worries me. There’s that little bit that holds on: Well, I’m almost an atheist. Give me a couple of months. [in 2003]

The Hollowverse | The religion and political views of David Bowie

However, returning once more to “Pushing Ahead of the Dame” we find it argued that Buddhism was indeed an influence on early Bowie songs. There O’Leary writes that Bowie “meant for the backing chorus of his [1965] single “Baby Loves That Way” to sound like chanting monks.” Have a listen:

And his 1967 “Silly Boy Blue” tells the story of a rule-breaking boy in the streets of Tibet’s capital city Lhasa:

Though some of his colleagues and friends in the late Sixties considered Bowie’s Buddhist leanings to be hip affectations, others saw a more fervent side of him. The journalist George Tremlett and Bowie’s housemate/lover Mary Finnigan attested that Bowie was serious about Buddhism, speaking to them for hours about it. Whether he truly meant to join a Tibetan Buddhist monastery in Scotland, which he visited in late 1967, is very questionable. What’s not is that the symbols of Buddhism, its sutras, its concepts like reincarnation (see “Quicksand”), the Oversoul and astral projection (see “Did You Ever Have a Dream“), were essential to Bowie’s growth as a songwriter. Buddhism gave him a reservoir of imagery to use: it gave him a spiritual scaffolding.

Pushing Ahead of the Dame | Seven Years in Tibet

The Chinese invasion and occupation of Tibet further spurred Bowie’s interest in and sympathy for Tibetan Buddhism.

When you’re kind of young and idealist we were protesting the invasion of Tibet by China. And thirty years later they’re still there. Nothing has really moved. And more than anything else it was the lectures that the Dalai Lama has been doing over the last couple of years that really prodded me a bit. Made me feel quite guilty that I’ve known about this situation quite well and quite intimately for many, many years—that I hadn’t actually come out and made my stance on what I feel about it. So I guess that song [Seven Years in Tibet, below] in a way was to make some kind of amends.

Bowie, radio interview, 1997. [from Pushing Ahead of the Dame | Seven Years in Tibet]

In that year he released the very dark “Seven Years in Tibet” with lyrics including: ‘Are you OK? | You’ve been shot in the head | And I’m holding your brains,’ | The old woman said…

Speaking of the song, Bowie noted:

The subtext of the song is really some of the desperation and agony felt by young Tibetans who have had their families killed and themselves have been reduced to mere ciphers in their own country. 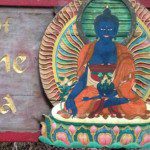 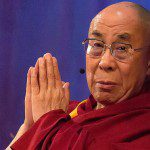 January 19, 2016 In power grab from the Dalai Lama, China announces list of "verified living Buddhas" for Tibetan Buddhism
Recent Comments
0 | Leave a Comment
"I came across this site by accident, It reminded me of a story about two ..."
quacknduck Tourists: Buddha Tattoos are Taboo; as ..."
"eMudhra Limited is a certified body, licensed by the Government of India. eMudhra operates in ..."
Mycaportal Buddhism: Dzogchen and Mahamudra
"folks hav to learn the local laws wen they invade the space"
Joe Biggs Tourists: Buddha Tattoos are Taboo; as ..."
"too polite ..if folks are ignorant of local laws they hav to be brought to ..."
Joe Biggs Tourists: Buddha Tattoos are Taboo; as ..."
Browse Our Archives
get the latest updates from
American Buddhist Perspectives
and the Patheos
Buddhist
Channel
POPULAR AT PATHEOS Buddhist
1