Similes for Buddhist Ethics: the traffic-light by Ven. Ajahn Brahm

In teaching and understanding Ethics in the West, it might be an apt generalization to say that we tend to use thought experiments. The oldest one that I know of is in Plato’s Republic, the Ring of Gyges. The experiment asks the listener to imagine a magic invisibility ring and asks whether any person could be so virtuous as to avoid using it for merely selfish gain. The argument, suggested by the interlocutor Glaucon, is that morality is a social construct and that free from social bonds, even a seemingly virtuous person would become overcome by vice.

More famous and recent ones include the trolley problem and case of lying to the Nazi (or other would-be murderer) who is looking for their would-be victim who you have hidden away in your home.

In Buddhist ethics, we tend to hear and use similes instead. It might be worth exploring this further: are there many thought experiments in the history of Buddhism? Are there just as many similes to be found in Western ethics? Is this an aspect of Buddhism that fits more into our category of ‘religion’ than ‘philosophy’?  The lay precepts themselves are sikkha-pada, training principles. The simile of taming one’s mind is used, as are perhaps countless others. The popular site for Theravadin Buddhism, which includes free translations of much of the Pali canon, Access to Insight, offers a lengthy index of similes ranging from ‘acrobats’ to ‘wounds, dressing’ and ‘wounded man wandering in the jungle’.

One such 20th/21st century simile for the 5 lay precepts comes from Ajahn Brahm, in this 2013 talk on Buddhist ethics. He couches the story in the context of lying. Should the precept be held firmly, absolutely, dogmatically? Are there times when someone really should lie, even according to Theravadin orthodoxy?

Can lying be morally correct?

The story, in brief, is of a woman whose husband is in the hospital for a heart bypass surgery. He befriends the man next to him who is going in before him. The man, unbeknownst to him, dies in surgery – but his wife finds out. As he is going off to surgery he asks her how his friend is doing and… she lies. She feels bad, but thought that telling him the truth in this weakened state might have pushed him over the edge.

Ajahn Brahm agrees. This might be an okay time to tell a lie. The moral of the story isn’t that it’s okay to lie sometimes; but rather that only very rarely and in extraordinary circumstances like this is it okay to lie.

The 5 precepts aren’t there to make decisions for you. That would be profoundly unBuddhist, taking away your freedom and responsibility. Instead they guide you.

In normal life, when you come to a red light, you always should stop. However, there are exceptions, such as medical emergencies. Then, you should run through every red light. But, he further warns, when you’re running through the red light, you should still pause and use caution. Because when you run a red light you risk causing extreme harm, perhaps hurting more people than you were hoping to help.

He applies this to the question of abortion which, like any taking of life, should be seen as a red light. But, he further states, the precept is not a moral absolute, a thou-shalt. Think about the intentions in the act, the hopes for the future, and whether running that red light might be necessary and in this case most helpful. Euthanasia is the same, he says. This is a taking of life, which goes against the precept. But it might be necessary and good to do that.

“Be careful, tread carefully in these places,” he concludes, noting that these decisions are often weighty and a seemingly ‘wrong’ action will be better met with compassion and understanding than judgment and finger-wagging. 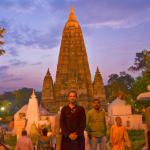 October 26, 2017
Explore Buddhism (and more) in India this new year
Next Post 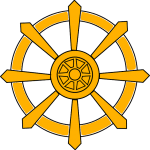 November 12, 2017 Meditations on Communities and Gratitude
Recent Comments
0 | Leave a Comment
"Anyone going to point out that your oldest portrayal of buddha... appears to be white... ..."
Scar The oldest datable depiction of the ..."
"This is a thoughtful article. I must admit, after living in crowded Hong Kong, I ..."
Gary Price The Coronavirus is coming – Some ..."
"Well explained. Dholavira is also one of the largest site of Indus Valley civilization. It ..."
Kirti Bajaj Major Sites of the Indus Valley ..."
"Nice write up Justin."
Catalin Newport In Hong Kong, the Bodhisattvas wear ..."
Browse Our Archives
get the latest from
American Buddhist Perspectives
Sign up for our newsletter
POPULAR AT PATHEOS Buddhist
1