Bhikkhu Bodhi addresses the Climate Crisis at the UN (Video)

Watch below as Ven. Bhikkhu Bodhi addresses the UN on the climate crisis. According to scientists, we have only a matter of years to prevent widespread ecological collapse, and every day new reports suggest that the window of opportunity might be even smaller than anticipated. As Bhikkhu Bodhi points out, much of this gets little attention by mainstream media, “A symptom of how we can seal from ourselves, the real perils that lie just before us.”

Indeed, delusion, often self-delusion, is at the root of, well, most everything in Buddhism. And as such it is incumbent upon Buddhists to seek out the roots of that delusion and see the reality of the climate crisis as it is.

Four years ago, Bhikkhu Bodhi was a signature on the “Call to Action for U.S. and World Leaders to Proactively Address the Adverse Psychological and Social Impacts of Climate Disruption” (see link below), and he has continued his steadfast work to raise awareness about this pressing concern. As he says in the address:

The discourses of the Buddha speak of the causal origins of suffering primarily in the framework of the individual quest for liberation. They show how the mental afflictions damage our personal lives and how was individuals. We can free ourselves from them today. However, as the world has been integrated into a single interdependent global order, we have to examine how this process of causation operates at a collective level and then based on this investigation we must determine the kind of changes we must make in our societies, political institutions, and global policies to avoid the adversities we face as an international community. We can call this a global application of sati sampajañña, of mindfulness and clear comprehension of all the dangers we face together today, the most formidable, the most all-embracing, and the most threatening is the one usually called climate change, but which perhaps might be more accurately called climate destabilization or climate disorientation.

“Buddhism offers a vast tradition of philosophical and moral reflection. But traditions endure only to the degree to which they address the experience and concerns of each new generation. Our contemporary concerns include justice and inequality, navigating difference in multicultural societies, climate change, and the pervasiveness of information technology. Discerning how to speak, act, and think skillfully in our contemporary context requires us to engage with these concerns. As Buddhists, we should not be afraid of drawing on Western thought when it can help with this engagement.”

Above all, we have to turn away from a social system driven by greed, by the quest for limitless profits, by competition, exploitation, and violence against other people and the natural world, social systems that allow a few to flourish while millions, even billions, live on the edge of survival. Instead, we need to envision new collective systems of global integration that give priority to cooperation and collaboration, to living in harmony with each other and with nature, systems that will enable all people to flourish economically, socially, and spiritually.

Can we do this before it is too late?

Buddhist leaders: sign to raise awareness of the psychological, spiritual, and moral effects of climate change 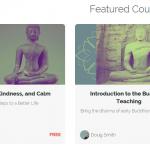 August 4, 2019 A Buddhist Story for Troubled Times: Grief, Loss, and Heartbreak
Recent Comments
0 | Leave a Comment
"https://www.theguardian.com..."
Donalbain Vaccines, Pharmaceutical Companies and the CDC
"I've read that borderline persons have a high sense of fairness and BPD is soooo ..."
steven solomon Borderline Personality Disorder and Buddhism (IV)
"I came across this site by accident, It reminded me of a story about two ..."
quacknduck Tourists: Buddha Tattoos are Taboo; as ..."
"eMudhra Limited is a certified body, licensed by the Government of India. eMudhra operates in ..."
Mycaportal Buddhism: Dzogchen and Mahamudra
Browse Our Archives
Related posts from American Buddhist Perspectives