Al-Lat: the pre-Islamic Goddess of the Harvest, Fertility, and Love

According to pre-Islamic Arabic myth, God, or Allah, created three daughters who will take care of all he had created so far, the highest deities after Him. These three sisters were Manat, Al-Lat and Al-‘Uzza. We already met Manat before, so it’s time to know more about the middle sister, Al-Lat, whose role is a bit more diffuse than Manat’s.

Let’s start with the most basic book on Arabian paganism: The Book of Idols, by Hisham Ibn al-Kalbi, which states that:

“They then adopted Allat as their goddess. Allat stood in al-Ta’if, and was more recent than Manah. She was a cubic rock beside which a certain Jew used to prepare his barley porridge (sawiq). Her custody was in the hands of the banu-‘Attab ibn-Malik of the Thaqif, who had built an edifice over her. The Quraysh, as well as all the Arabs, were wont to venerate Allat. They also used to name their children after her, calling them Zayd-Allat and Taym-Allat.

She stood in the place of the left-hand side minaret of the present-day mosque of al-Ta’if. Allat continued to be venerated until the Thaqif embraced Islam, when the Apostle of God dispatched al-Mughirah ibn-Shu’bab, who destroyed her and burnt her (temple) to the ground.”

Searching a bit more, we find that Michael Jordan included her in his Dictionary Of Gods And Goddesses:

Astral and tutelary goddess. Pre-Islamic northern and central Arabian. One of the three daughters of Allah. At Palmyra she was regularly invoked as a domestic guardian either as Allat or Astarte with whom she is closely linked. At Ta’if she was symbolized in the form of a white granite stone. In Hellenic times she became syncretized with Athena or, according to Herodotus who called her Alilat, with Aphrodite.

In addition to this, Al-Lat has been linked with Atargatis, a Syrian mermaid goddess. Her granite stone was said to be cubic, and she was called the goddess of the harvest, fertility, and love. She has been associated with both the crescent moon and the sun, and had many epithets, among which are ar-Rabbat (‘The Lady’), Ilāhatan, Elat and ‘Arsay.

Al-Lat was called upon to show mercy and grant ease, prosperity and well-being to the worshipper. She was also invoked for protection against enemies, vengeance against aggressors, and for favourable weather. She was venerated as the goddess of vegetation, agriculture, and fertile soil, and the divine provider of trade, wealth, and power. After onyx stones were found on her shrine at Ta’if, it was considered sacred to her. Among her sacred animals, the first is the lion, followed by the gazelle and camel.

Although she has been compared with Astarte and Aphrodite, I would also name Demeter, due to her role as a goddess of harvest. The connections don’t end here, though. Al-Lat is sometimes said to be the same deity as “Al-‘Uzza”, this second name being a title rather than a different goddess, or “Atarsˇamain”, a deity of uncertain gender.

Al-Lat was considered to be a protector of the spirits of the dead who dwelt under the earth, and, coincidentally, we also have “Allatu,” a western Semitic Chthonic underworld goddess about whom there is barely any information. At this time, I believe “Allatu” is the title of Al-Lat when acting as protector of tombs, cemeteries, graveyards, and remains.

She was the consort of Dhu’l-Shara, a god of vegetation and mountain springs, and when depicted, she is often accompanied by a lion, as a symbol of her lover. The “Lion on Al-Lat” is an actual statue that used to be in her temple in Palmyra, but after being damaged by the Islamic State of Iraq and the Levant in 2015, it was restored and sent to the National Museum of Damascus.

What can we do with all this information? As I said when I wrote about Manat, we can be part of Al-Lat’s rebirth. It’s just a matter of being creative to get nearer to this still-mysterious goddess.

If Al-Lat was represented with a cubic, white stone, what could stop us from using a square of white paper as a representation of her? Or even greeting the goddess when we come across a yellow or golden cat?

I won’t say I have seen her, or her sister Al-‘Uzza. Both of them have remained behind Manat, but that hasn’t stopped me from reading and discovering more about them, or even writing a meditation to connect with Al-Lat, which is waiting for you down below. As a side note, feel free to alter the Call of Al-Lat I present if you prefer. Say it in Arabic, in English, change it completely, but keep it simple at first and pay attention to what symbols she presents to you.

Just be aware that she is a powerful deity. While she is the second sister, it doesn’t mean she is any easier to work with than Manat. Her name sounds strong when I say it out loud, but I feel protected as soon as I do. She is a guardian and a mother, after all, and like any mother, Al-Lat loves us unconditionally.

Sit comfortably in a quiet room, preferably with a lot of natural light coming in. If possible, do it outside, but if not, open a window or have one near to you.

Focus your eyes in a white paper square in front of you or a white wall if there is one near. Take several deep breaths and allow your mind to think whatever it wants to. Don’t try to control it. Write her name in black: اللات‎ (remember that Arabic is written from right to left) and close your eyes when you feel ready and call for the Goddess:

Feel the energy that surrounds and builds up inside you, try and reach out to the goddess that is emanating that light, that power that takes the shape of a powerful, white lion in front of you. See the lion advance calmly, and when she is right in front of you, ask for her blessing and lower your head so she can kiss your forehead.

When she does, she also gives you a bit of her power, of her light that guides and protects, the white fire that creates anything your heart desires. Receive it and show that fire the way from your forehead down to your heart. What does it feel like? What use could you give it?

Say thank you in whichever words you prefer, and when the lion goes, take deep breaths and open your eyes. I would suggest you to journal the experience, or record it in your phone, but do it as soon as you feel fully awakened.

In the days after, pay attention to any symbol, metaphor, feeling, or anything else that catches your attention, and revisit it after a couple of days or weeks. Al-Lat can be more explicit in her messages than Manat, but you will only know for sure after you speak with her a couple of times, and listen. Who knows what message our mother could have for us? 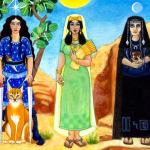 September 8, 2020
Manat: The pre-Islamic Goddess of Time, Fate and Death
Next Post 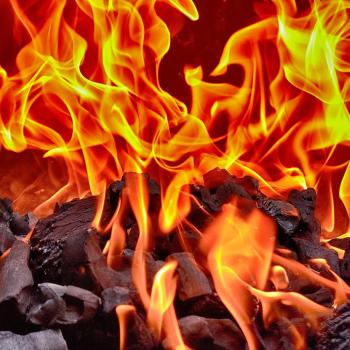 2 responses to “Al-Lat: the pre-Islamic Goddess of the Harvest, Fertility, and Love”