Welcome to the Occupation pt 2

I had lunch with my mentor last week. Vicki L. Ruiz is a pioneering Chicana historian who has been my mentor/friend for nearly 20 years. She made grad school possible for me. She has offered me encouragement and has been my “oracle” as I’ve traveled these turbulent academic fields.  This past fall, she became the first Latina historian to be inducted into the American Academy of Arts and Sciences, (she was inducted by Daniel Day-Lewis, not bad for a Chicana from Florida).  I could go on with the number of firsts in her illustrious career–and what is most impressive about her, to this day, is that she is real–there is not a hint of self-important pretentiousness about her (for those readers in the academy, you know how rare a feat that is).  I find myself mimicking her sometimes, answering student questions with a list of books and articles I have stored back in my mind after decades of reading. I am asked often about Ph.D. programs, about the chances of actually getting a job when its all over–about as good a chance as me paying off my student loans before retirement. Lo Siento! (sorry!)

Vicki took a chance 20 years ago. I did not have a stellar college pedigree, I was a very average student, but I had interests in religion and Latinos/as that I think caught Vicki’s attention, because no one else was doing it, like a crafty talent scout–Vicki knew the field and knew that the time had come to study Latino/a religious history–even though it was not her forte, she took a risk–you have to believe me–that I was a risk.  When I told her I wanted to write my dissertation on an obscure 19th century Methodist turned Swedenborgian–who dabbled in hallucinogenics–she found it amusing, and immediately told me that as Latina, I was obliged to write about my community–or face years in” Adjunctland”–in L.A., its called freeway flying–where you travel endless days and nights from one teaching gig to another–criss crossing the ribbons of freeways until you get used to living in Santa Monica and ending your 16 hour day in Riverside–the hope of full-time employment–receding into the blur of traffic.

Vicki, as I have noticed in 20 years of following her career, has a very simple strategy–she pays it forward–she writes letters, promotes books, blurbs books, attends talks, conferences, speaks highly of her students to anyone who will listen, because she has a commitment to our success–and in turn, people in the history field reward her work, commitment, and love for the discipline by taking chances on her students–even if they are flaky religious historians.  Vicki is my Obi Wan, so I guess that makes me Luke Skywalker? (Apologies for mangling the Star Wars metaphors, I know how important that is to some of you)

So last week, I was contacted by some younglings, (I am going with the Star Wars metaphor the rest of the way), about yet another conference panel–where I would be the senior scholar who commented, (really they pass judgment, but who’s counting), on the topic of “New Directions in Latina/o Religious History.”  I was flattered–and a bit surprised that I have attained this status in what is still a very nascent field.  Of course, I am too busy, I have way too many deadlines, I am so tired! But I have learned from the Master, to pay it forward–and I accepted the offer to comment. I accept offers all the time, to write letters, promote books, blurb books, attend talks–why? Because I have learned that there are basically two ways to get ahead in this business.  One is the road often taken, shameless self-promotion, which, in many ways is something we all do, but this road is often lonely–people work with you because they have to—given a choice they’d rather not. The other road is the one where you do things for people, you network, you get your name, your work, and your willingness to be helpful out there–people work with you because they like your work and they like you–Vicki Ruiz is one of those people, and she’s taught me to be one of those people–so far, so good.

I also do it because I became convinced that I wanted to work with people I like, I wanted to help younger scholars and I too insisted that they tell our stories–because who else will tell them?  I know the popular media-fueled conception is that there has been an explosion of Latinos/as in popular consciousness–actors, sports figures, Supreme Court Justices (only one, people), so it seems that our time has come?

When Vicki Ruiz graduated from Stanford in 1982, she was the 5th Latina to receive a Ph.D. in history in the history of the United States!  When I followed in her footsteps with a history Ph.D. from Claremont in 2001, I was number 25…how far have we come really?  Younglings, write our stories, help each other out–and keep paying it forward.

Next time, I’ll introduce you to some of the younglings that are harnessing the flow of the Force within (I’ll stop there)…and get a few of them to guest blog in this spot from time to time…Yes, I’m busy paying it forward, why? Because I’ve learned from the Master…

Besides,  if Vicki can get a distinguished-looking gray-haired, erudite Daniel Day-Lewis to induct her–what do you think my chances are of getting Ryan Gosling? 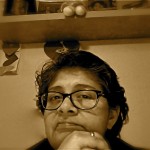