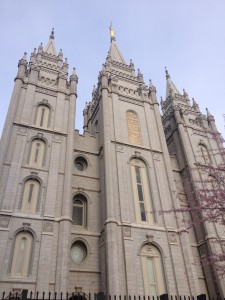 We are back for the second session of the day!

This afternoon, Todd and I will be joined by Blake S. He is a law student and a a former student of mine from my days at BYU-Idaho.

Todd and I enjoyed observing protesters between session. We witness an Atheist protester and a Born again protester get into a confrontation with each other.

This morning, we had a great conversation and saw the first prayer ever offered by a women in General Conference.

In addition to Blake, my friend Brian Duffin will also be joining us. I hope that you will join us, too!

Pres. Henry B. Eyring is conducting this session.

The music is being performed by a combined BYU choir.

Young Women’s President Elaine Dalton and her counselors were released.

Bonnie Lee Oscarson??? I did not get the full name of the new YW President. Will update when I have that more exactly.

Sister Oscarson has served as both a ward Young Women president and as an early morning seminary instructor multiple times. From 1976

to 1979 she served with her husband, who was the president of the Sweden Göteborg Mission. From 2009 to 2012, she served as the matron of the Stockholm Sweden Temple. She holds a bachelor’s degree from Brigham Young University with an emphasis in British and American Literature, and is married to Paul Kent Oscarson. They are the parents of seven children.

Most recently Sister McConkie was serving on the Young Women General Board. She has served as a ward Young Women president, in a ward Relief Society presidency and in a ward Primary presidency. She has also served as a Primary teacher, Sunday School teacher and with her husband, who was president of the California San Jose Mission from 2005 to 2008. She holds a Bachelor of Arts in English Education from Arizona State University and is married to Oscar W. McConkie III. They are the parents of seven children.

Sister Marriott recently served as an ordinance worker in the Salt Lake Temple. She has also served as a stake Relief Society president, ward Relief Society president, ward Young Women president, gospel doctrine teacher, Primary teacher, Sunday School teacher and in many other callings. She served with her husband who was president of the Sao Paulo Interlagos Mission from 2002 to 2005. She holds a Bachelor of Arts degree in English Literature and Secondary Education from Southern Methodist University and is married to David Cannon Marriott. They are the parents of 11 children.

Elder Ulisses Soares was named to the Presidency of the Seventy, succeeding Elder Walter F. González.

Elder Richard G. Scott spoke on the importance of Christ-centered life and Christ-Center family.He also touched on the way that technology might be part of such a life…as well as a distraction.

Elder Cook is discussing peace. Mentions the Newtown massacre,  famine and turmoil in the Ivory Coast, and 9/11.

Elder Cook emphasized the role of forgiveness in achieving peace. The Savior’s peace can “blot out our hates,” said Elder Cook.

“The Savior is the source of true peace,” said Elder Cook.

Elder Bednar discussed the creation, procreation, and the Law of Chastity. We are here are here on earth to “bridle all passions of the flesh.”

Lucifer wants us to be alone and miserable, Elder Bednar said.

Guilt is spiritual pain meant to warm us of danger, Bednar taught. He added that obedience to the law of chastity will increase our happiness.

Elder Russell M. Nelson encourages those going on mission to apply to college/university before their missions rather than having it as a burden while serving.

Elder Nelson is encouraging all members to “catch the wave” of missionary work that is happening with the recent boost in those serving missions.