Is God an American?

While I cringe at the heavy doses of American exceptionalism (often in the most cheesy forms) within American religious culture, maybe there is something valuable in viewing American and Christianity as being intertwined.

However, it is often not intertwined in a positive sense, like a manifest destiny, but a destructive one. Of course, “Manifest Destiny” itself was corrupt and destructive. This mixture of American and Christian identities is something that was can trace back to the Mayflower. It is also a mixture which have evolved over the centuries,

I think that David Bowie (with some help from Trent Reznor) give s an interesting, and very disturbing, interpretation of violence in American Society in his song “I’m Afraid of Americans.” Near the end, Bowie sings “God is an American.”

Luckily, the American God is not God. God is not an ideological construct. 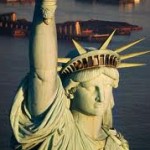