Footprints in the Muck, Blind Spots, & Seeing Past the Light

Mud is a messy dialogue. It is the in-between state, the parley between earth & water, ground & sky, inside & outside, soft & hard, firm & fluid. Mud season in Maine looks both backward and forward. The more snowfall we had, the more water there is in the thaw, yet we are getting our first taste of the coming warmth of summer. Mud embodies these conversations.

The snow that has blanketed our lives for the past few months is mostly gone; all that remain are piles of ice and slush in the shade, with a tremendous amount of mud everywhere. This is the time of year where we park the car further up the driveway, keep it on the paved end. If we were to pull the car down into the dirt of the driveway, it would sink and even if we didn’t get stuck, it would create huge tire tracks that would need repair later. Simpler by far to keep the car off the mud. Footprints in the muck are far easier to flatten out.

The mud is a boundary. The bottom of the driveway is not paved, but it is cleared of the wildlife that once lived there. Even still, in the summer the grass blurs the boundaries, as the wild urges of nature assert themselves over that which we humans thought we controlled. Wildness is nothing if not resilient.

In the air, moisture clings low to the ground. The nascent mist is like a child getting its first taste of freedom, yet remaining within earshot of the helpful guardian of ground. Its welcome not worn, we will long for this cool mist in a few short months under the heavy heat of summer.

Further up the sky, in the twilight, I see some familiar faces: the moon won’t rise for hours, but Venus shines, jewel-like in the east, with Jupiter nearly overhead. As I gaze more deeply, I pick out Sirius, and then Betelgeuse and Arcturus, as they reveal themselves against the deep blue backdrop of dusk. As my eyes adjust to seeing differently and changing the locus of focus, I start to see a few more stars.

Averted vision is a fascinating a way of seeing and a good technique to develop. When we look straight on at something reasonably bright, our eyes employ more cone cells which are better for seeing detail and exact shades of color. Humans, with our glyphs and books and electronic screens, are highly skilled in this mode of perception. However, on the periphery of our vision the concentration of rod cells is much higher, which are better at seeing brightness and contrast. Learning to focus on this periphery, engaging the rods without allowing the periphery to become the center of attention, is a very useful skill, certainly for the stargazer, but it can benefit any observer. You will be able to discern dimmer and more subtle things before most people can.

Such is the nature of consciousness: while we have some measure of control over what it does and where it goes, attention has a will and an eye of its own. Usually, the untethered consciousness is on the lookout for Awen, that strange Druidic word-concept that means so many things. Inspiration, the Druid will say, is the best way to think about Awen, but it goes deeper than that. Every creative person will have their own relationship with Awen and its flow; the really skilled bards and artists will have mastered it. For Awen is always there all around us, if we can only learn to see. Sometimes, Awen is timid and shuts down under direct observation. We have to engage it, seduce it, often with play. The best artists know how to play.

Playing with indirect viewing can help us transcend the blind spots we don’t even know we have. Concepts are like light; when we perceive them, it tends to influence what we don’t see. They are useful and illuminating, but they create blind spots. In terms of perception, this is called masking, where two stimuli of similar type (such as frequency range for sound), the stronger stimuli will tend to render the weaker one invisible.

Take a moment. Step back. Let your focus unlock from the bright & shiny, and allow it to move around a bit, wander off, and see if something new shows itself to you.

The stars and the bodies above are still watching; they change their perspectives slowly. I wonder if they can see me better in the periphery of their vision, too.

April 6, 2015
Developing a Daily Devotional Practice of Place
Next Post 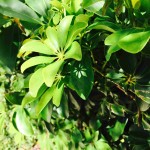 April 22, 2015 Earth Day: A Moment to Celebrate
Recent Comments
0 | Leave a Comment
Browse Our Archives
Related posts from A Sense of Place