Do Muslims Revere Mary, The Mother Of Jesus? 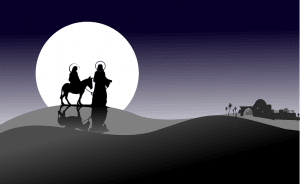 Do the Muslims revere Mary, the mother of Jesus? The references in the Qur’an may surprise you.

I got some flack from some of my Christian cousins a few months ago when I published a post on my blog titled, Do Muslims revere Jesus more than the Christians?

How could you possibly revere Jesus more than we do, they asked me. Others opined that the title pits Muslims vs Christians (who loves who more scenario), and therefore may cause friction and should be avoided.

This post is about Mary, the mother of Jesus and whether the respect and reverence for her is shared by Muslims and Christians, not whether Muslims revere her more or less, than their Christian cousins.

Mary’s position in the eyes of the Christians may not be as high as Jesus’, but she is indeed highly revered by all Christians, perhaps more than any other woman in history.

Sure different denominations view her differently- for example, the Roman Catholics and the Orthodox Christians venerate her, believe in the Immaculate Conception and her assumption into heaven. The Protestants, on the other hand don’t hold her in the same level of regard but revere her nonetheless.

But where do the Muslims stand in their views on Mary?

Here are some facts that you may not be aware of the Muslim perspective on Mary, mother of Jesus.

Jesus, the son of Mary

Then We made Our messengers to follow in their footsteps, and We sent Jesus, son of Mary afterwards, and We gave him the Gospel and We put in the hearts of those who followed him kindness and mercy. 57:27

Those messengers We endowed with gifts, some above others: To one of them Allah spoke [referring to Moses]; others He raised to degrees (of honor); To Jesus, the son of Mary We gave clear (Signs), and strengthened him with the holy spirit. 2:253 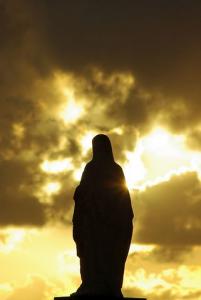 Christians believe that Mary knew about Jesus’s birth without a father when archangel Gabriel announced the birth of Jesus to her. The passages in the Gospel of Luke and the Qur’an are closely aligned and are referenced here.

In the sixth month of Elizabeth’s pregnancy, God sent the Angel Gabriel to Nazareth, a village in Galilee, to a virgin named Mary. She was engaged to be married to a man named Joseph, a descendant of King David. Gabriel appeared to her and said, ‘Greetings, favored woman! The Lord is with you!’

Confused and disturbed, Mary tried to think what the angel could mean. ‘Don’t be afraid, Mary,’ the angel told her, ‘for you have found favor with God! You will conceive and give birth to a son, and you will name him Jesus. He will be very great and will be called the son of the Most High. The Lord God will give him the throne of his ancestor David. And he will reign over Israel forever; his Kingdom will never end!’ Mary asked the angel, ‘But how can this happen? I am a virgin.’

The angel replied, ‘The Holy Spirit will come upon you, and the power of the Most High will overshadow you. So the baby to be born will be holy, and he will be called the son of God. What’s more, your relative Elizabeth has become pregnant in her old age! People used to say she was barren, but she’s now in her sixth month. For nothing is impossible with God.’

The Qur’an does not name the angel but is widely believed to be archangel Gabriel.

(O Muhammad) Relate to them the story of Maryam in the Book (the Qur’an) when she withdrew from her family to a place in the East. She chose to be secluded from them. We sent to her Our angel and he appeared before her as a grown man. She said: “I seek Rahman’s (The Gracious-God’s) protection against you, leave me alone if you are God fearing.” He said: “Don’t be afraid, I am merely a messenger from your Rabb [Lord] to tell you about the gift of a holy son.

She said: “How shall I bear a son, no man has ever touched me nor am I unchaste?” The angel replied: “So shall it be—Your Lord says: “It is easy for Me. We wish to make him a Sign for mankind and a blessing [mercy] from Us—and this matter has already been decreed.” So she conceived the child and she retired with him to a remote place.

Annunciation in the Qur’an- further references

The Qur’an: Jesus speaks from the cradle

This event is something not found in the New Testament. The Qur’an is very keen on testifying to the chastity and purity of Mary, the mother of Jesus. When questioned by her people as to how she could bear a child without a father, she asked the baby Jesus to speak in her mother’s defense! (“Sister of Aaron” in this passage is in reference to Mary being from the progeny of Aaron, not his sister from the same parent).

At length she [Mary] brought the (baby) to her people, carrying him (in her arms). They said: ‘O Mary! Truly an amazing thing hast thou brought! O sister of Aaron! Your father was not a man of evil, nor your mother a woman unchaste!’ But she pointed to the baby. They said: ‘How can we talk to one who is a child in the cradle?’ He (Jesus) said:

‘I am indeed a servant of Allah: He has given me revelation and made me a prophet; And He has made me blessed wheresoever I be, and has enjoined on me prayer and charity as long as I live; (He) has made me kind to my mother, and not overbearing (or hard to deal with); So peace is on me the day I was born, the day that I die, and the day that I shall be raised up to life (again)!’ Such (was) Jesus the son of Mary: (it is) a statement of truth, about which they (vainly) dispute.  19:27–34

Mary’s Birth and her sustenance from Paradise

Behold! a woman of Imran said: ‘O my Lord! I do dedicate unto You what is in my womb for Your special service: So accept this of me: For You hear and know all things.’ When she was delivered, she said: ‘O my Lord! Behold! I am delivered of a female child! And Allah knew best what she brought forth. And no wise is the male like the female. I have named her Mary, and I commend her and her offspring to Your protection from the Evil One, the Rejected.’

Graciously did her Lord accept her: He made her grow in purity and beauty: To the care of Zechariah was she assigned. Every time that he entered (her) chamber to see her, He found her supplied with sustenance. He said: ‘O Mary! Where (comes) this to you?’ She said: ‘From Allah: for Allah Provides sustenance to whom He pleases without measure.’ 3:35–37

As if the passages elsewhere left any doubt about , the following passages say it all, needing little if any commentary.

And We made the son of Mary and his mother a symbol [of Our grace], and provided for both an abode in a lofty place of lasting restfulness and unsullied springs. 23:50

It is interesting to note how Mary and Jesus are so intertwined in the preceding passage but without referring them with their own name. Instead Jesus is referred to as ‘son of Mary” without naming him and Mary as “his mother”. It is like calling me “Mrs. Naqvi’s husband”.

And in an ultimate tribute to Mary, the mother of Jesus, the Qur’an declared:

“Behold! the angels said: O Mary! God has chosen you and purified you, chosen you above the women of all nations.” 3:42

Do you think Muslims revere Mary more than the Christians?

If so, why don’t we see more programs /events honoring her?

And don’t forget to share it on your social media. The icons are located on the upper left hand of the page. 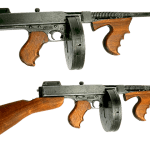 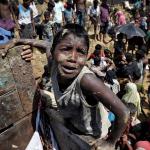 November 12, 2017 Rohingya Muslims Genocide-What Happened to Never Again?
Recent Comments
0 | Leave a Comment
Browse Our Archives
get the latest from
Ask A (Born Again) Muslim
Sign up for our newsletter
POPULAR AT PATHEOS Muslim
1