Reliving My Hajj a Year Later: A Night Under the Sky in Muzdalifah

Reliving My Hajj a Year Later: A Night Under the Sky in Muzdalifah August 20, 2018 Ejaz Naqvi, MD 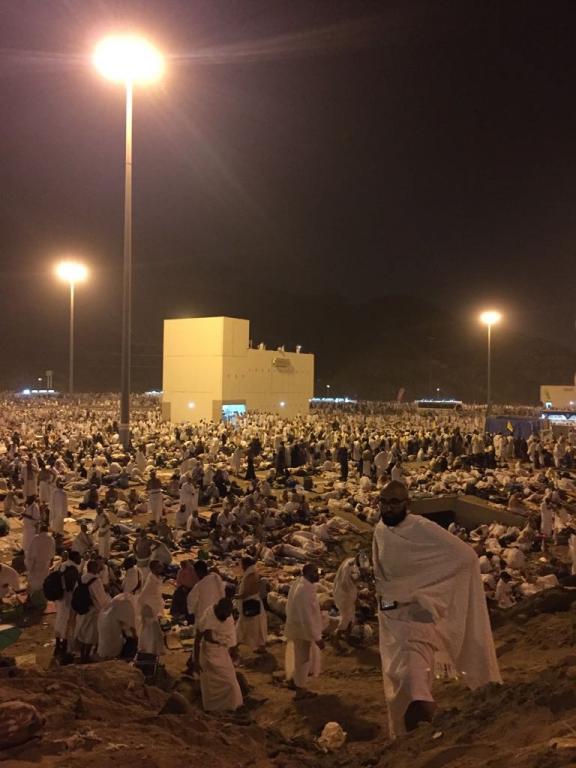 There were several most-unforgettable rituals and events during the unforgettable trip. Praying at the mosque of the Prophet in Riaz al Jennah, the first time I laid my eyes on Ka’aba, and the Friday prayer outside the Ka’aba in the simmering heat were among them.

And then there was this short stay at Muzdalifah.

Muzdalifah is an open area near Mecca on the way to our next stop- Mina. We left Arafat after offering our Maghreb (Sunset) and Isha (evening) prayers. Our group was rather late leaving Arafat, as was evident by a sea of pilgrims already lined up in various places in the fields and mountainside when we arrived in Muzdalifah.

What was unique about Muzdalifah was that we are required to spend a night and stay there till after Fajr (dawn) prayer-under the sky. There were no hotel rooms (like Mecca) and no tents (like Arafat or Mina). Yes, we were to find an open piece of land and sleep there.

At Muzdalifah, the dirt was our bed and the sky our roof. No reservations were necessary.

What makes the stay at Muzdalifah so sacred is that it is specifically mentioned in the Qur’an. Mashar al Haram is another name for Muzdalifah,  meaning sacred monument.

There is no sin on you if you seek the Bounty of your Lord (during pilgrimage by trading). Then when you leave Arafat, remember Allah (by glorifying His Praises, i.e. prayers and invocations) at the Mashar-al-Haram. And remember Him as He has guided you, and verily, you were, before, of those who were astray. The Qur’an 2:198

This time is indeed spent in remembrance of God, glorifying Him and supplications. That’s practically all we did. (And yes we probably napped a little too).

One of the most memorable prayers I have ever offered was the Fajr prayer at Muzdalifah- memorable not just because of the occasion and location but because of the elements. It was still HOT even at dawn. There was little water for wadu (Ablution), so we had to improvise by using just a small water bottle. Then there were no cushy carpets to pray on. I was praying on paper-thin, portable prayer mat on the rocky mountainside, feeling every small rock and pebble under my feet while standing up, under my knees when kneeling and under my forehead when prostrating. And it was done all done standing crooked and side ways given the slope of the mountain side. I remember there was this huge rock directly facing me on the up slope some 50 feet away. If it had dislodged and moved my way, I wouldn’t be writing this post right now.

I still get teary-eyed thinking about the Fajr salat, just like I am right now. Teary-eyed, not because of the pain I felt, but remembering the tenderization of my heart, and how peaceful, worry-free and closeto my Creator and my Master I felt that early morning.

Another ritual at Muzdalifah is to collect small pebbles from the mountainside. This is to get ready for the morning and the next three days ahead, when we would use these pebbles to throw at the Satan in Mina, called Ramee. I will cover that on my next post.

Here is an overview of the sea of pilgrims gathered at Muzdalifah.  I have other videos too but they contain close up of several people and I don’t think they would want me to share them in public(some of them I don’t even know).

Remember the tow truck near the end of the video?

In addition to the spiritual high we felt, the stay was also marked by mundane stuff. We were staying practically next to the highway that was closed to the traffic, except for occasional bus carrying the pilgrims. This tow truck was towing a disabled bus. As it reached close to us, the tow truck got dislodged from the bus on the upslope, practically within a few yards from us! We heard a big thud. Thank God, no one got hurt! here is a picture that may give you an idea how close it got to us. 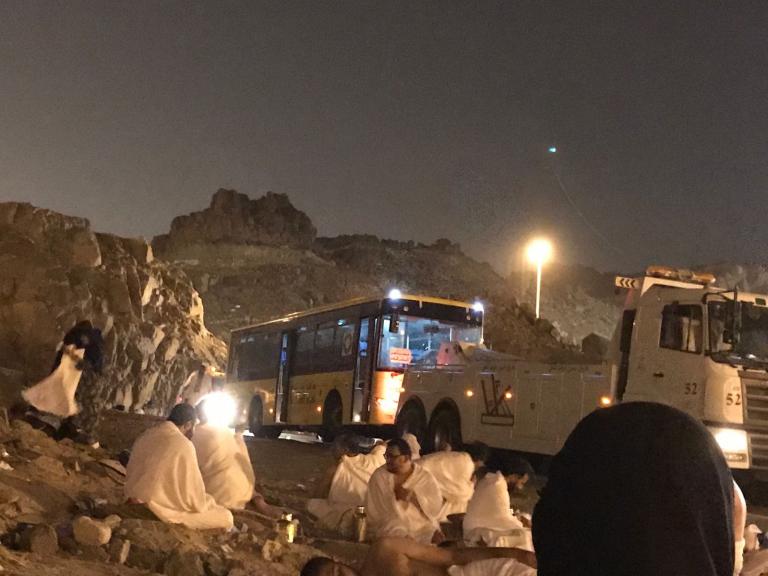 Ladies got lost and found their way

This was a minor miracle indeed. Ladies and older men have a choice to not spend the night at Muzdalifah and they are allowed to just stop by, then proceed to Mina where we had our tents reserved for our group. A small sub group from my group chose to head directly to Mina. They were on a separate bus. It just turns out they were on the wrong bus going to Mecca! The bus driver asked the ladies and an elderly man to get off somewhere in Muzdalifah and would not budge despite their pleas to take them to their destination. I don’t blame him because the schedule gets really complicated. In any event, the ladies were dropped off randomly near a highway. The rest of us had found a corner next to a mountain. The ladies had no clue how to find us. Our cell phones were not working at the mountainside. So they started to randomly walk in one direction, and lo and behold they bumped into us! If you have seen the sea of pilgrims at Muzdalifah, it was nothing short of a miracle for them to bump into us.

After offering the Fajr prayer, we waiting for the sunrise and along with two million other Hajjis(pilgrims), started to march towards Mina for Ramee (throwing pebbles at the Satan), which I will cover on the next post.

August 20, 2018
Reliving My Hajj a Year later- Arafat and the Day of Arafah
Next Post 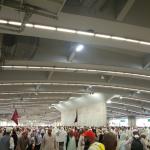 August 21, 2018 Reliving My Hajj a Year Later: Ramee- Following Abraham by Stoning the Devil
Recent Comments
0 | Leave a Comment
Browse Our Archives
get the latest updates from
Ask A (Born Again) Muslim
and the Patheos
Muslim
Channel
POPULAR AT PATHEOS Muslim
1