I left my hotel room around 9 AM for the Friday prayers with the thought that I would beat the crowd, as we had about three and a half hours before the Friday adhan ( call to prayer).

Well, everyone must have thought the same, as I found out that the gates to the Grand Mosque were already closed! The Grand Mosque was already full and pilgrims were lining up in the yard and the streets leading up to the mosque. The streets were closed for traffic for that very purpose. 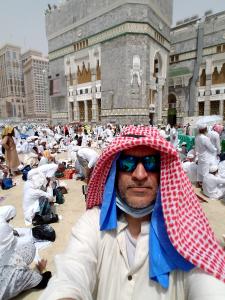 Instead of the rather comfortable environment inside the mosque, the pilgrims were taking their spots on the concrete yard under the scorching sun with temperatures already in 100 plus degree range around 9:30 AM!. Along with other pilgrims I actually consider myself very fortunate to even get that spot, which I was able to barely get to.

I was disappointed to not be able to enter the Grand mosque, and at my inability to pray with Ka’aba in plain site.

But praying just outside the gates on the concrete courtyard (where I could still have a glimpse of Ka’aba) actually turned out to be one of the most memorable days of the entire Hajj trip. Sitting on the scorching concrete, practically praying on the streets, waiting for more than three hours under the summer sun of Makkah (this is how Mecca is spelled locally) made the experience that much more rewarding with a great sense of accomplishment that brought calmness to my heart. It made me appreciate God’s blessings even more-things that we pretty much take for granted. One of the most important aspect of the entire experience was to continue to ask God for forgiveness, forgive others, ask others to forgive and a sense of gratitude for all the blessings, many of which I had taken for granted.

The extra time gave me an opportunity to ponder and supplicate, remembering God, and asking for forgiveness.I also saw random acts of kindness as the pilgrims waited for the Adhan. People were offering each other water, umbrellas, sprinkling cool mists, and letting them borrow their cooling (portable hand-held) fans just to name a few. Random acts of kindness were not that random on this day. We all felt so fortunate to have this opportunity, almost completely ignoring the (otherwise unbearable) elements.

Sitting on the super hot concrete in the intense heat was clearly uncomfortable, yet immensely rewarding experience. It reminded me of the stories of  Bilal, the African slave who converted to Islam, being dragged on the same streets where I was sitting- to renounce Islam. He never gave in, or gave up his faith and persevered despite persecution and threats to his life.

It was jammed packed practically every time we visited the Masjid Al Haram/Ka’aba but Friday was incredibly busy. I found out what shoulder-to-shoulder actually means! I am also sharing another short video with the focus on my water bottle, to illustrate how crowded it can get inside the Ka’aba during Hajj. The video speaks for itself. (This video was taken after returning from a tawaf – circumambulation, inside the Kaaba)

This was about the time we were getting ready to leave for Arafat onto Mina, where we will spend five nights in the tents, including one night under the sky with nothing over our heads. I will share that part of my Hajj pilgrimage and its significance in the next couple of posts.

This is an updated version of the post from last year. 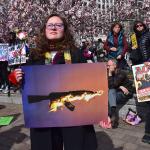 August 9, 2019 Reliving My Hajj 2 Years later- Significance of Day of Arafah
Recent Comments
0 | Leave a Comment
"I have been thinking about the OJ trial especially the victims Ron and Nicole. In ..."
Pmccoy0222 Was O.J. Simpson a Victim of ..."
"I honestly don't get what the point of the whole 'Jesus honor being protected' thing. ..."
David Brevik Islamic Views on Easter, Crucifixion and ..."
"So far there have been three: Jesus of Nazareth, Francisco of Assisi, and now Pope ..."
Kyllein MacKellerann " Pilgrim of Peace: Pope Francis’s Meeting ..."
"There are many ways to start dialogue. It usually starts at a local level- from ..."
Ejaz Naqvi Pilgrim of Peace: Pope Francis’s Meeting ..."
Browse Our Archives
get the latest from
Ask A (Born Again) Muslim
Sign up for our newsletter
POPULAR AT PATHEOS Muslim
1