The Five Idiots You Meet In New Age Heaven

The Five Idiots You Meet In New Age Heaven May 29, 2017 Matthew Currie 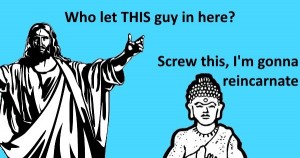 Congratulations! As a living being, you’ve won the right to eventually die. Various belief systems posit different destinations for the human soul after physical death, but few people realize that the Afterlife is pretty inclusive. That’s probably good news for you and me, but it means that a lot of annoying people you’d rather not deal with are going to be there too. Here’s a handy guide as to who you might run into. In fact, you may already know some of these people…

Description: Deathly pale (despite claiming to be half Cherokee) and dangerously thin (possibly due to a diet heavy on quinoa). He’s the first person you run into when you reach the Afterlife, but he’s not there to welcome you or act as your Spirit Guide: he’s there to bitch at you about how your fillings caused the yeast infection that enabled the parasites to kill you and if you’d only done a detox none of this would have happened (regardless of how you actually died). Fortunately, according to him, the autism you caught from the vaccinations your parents gave you as a kid means you aren’t responsible for it.

Cause of death: Died from treating his own inflamed appendix with dandelion tea.

Description: Tends to trip over things a lot, as she seems to spend all of her time with her eyes darting back and forth between a copy of “Kabbalah For Dummies” while simultaneously writing a blog entry about Jewish Mysticism. Surrounded by a cloud of her previously deceased cats, all of whom died from foxglove poisoning — acquired by drinking the tincture she didn’t know was poisonous to cats and kept spilling. Upon first seeing you, she tries to sign you up for her online course about How To Cope With The Afterlife (despite having only died fifteen minutes before you did).

Cause of death: Smoke inhalation, from when her Santa Muerte votive candle ignited her frankincense oil and she tried to put it out by waving a rosary at it instead of calling the fire department.

Description: Wears a snugly-fitting thrift store suit, possibly accented with a turban or tinfoil hat. Upon seeing you, he automatically hands you his business card and starts rattling off a list of big news stories from the last year, punctuated with shouts of “I predicted that would happen!” Then he starts to tell you in excruciating detail about the ancient and incredibly accurate numerology technique he invented a few months ago that can predict everything and anything, as far into the future as you want. Strangely though, he didn’t seem to predict that everyone eventually finds him too pompous to be around.

Cause of death: Cerebral hemorrhage, which occurred while he was shouting angrily at a Facebook group where someone dared question the math on his web site, which claims he’s “110 percent accurate, 200 percent of the time!”

Description: She seems pleasant enough at first, until you do something rude — like disagree with her, ask an honest question about her exceptionally peculiar beliefs, or correct an obvious factual error she made. Then she becomes indignant and accuses you of being a narcissist (or whatever other pop-psychology term is popular that week). Eventually, in order to protect herself from your “psychic attack,” she leaves, shouting “I’LL PRAY FOR YOU, LOVE AND LIGHT!” and then muttering something about how you’re just like her ex, and just like everyone she ends up dating, and just like her Dad.

Cause of death: Died on the street while lecturing an oncoming truck about respecting her boundaries.

Description: A heavily-cultivated hippie look composed entirely of hand-made, fair-trade Balinese silk. Wears a tie-dyed bandana emblazoned with the words CRUELTY FREE. Upon approaching you, he makes a point about being an animal rights activist, how concerned he is about saving wolves from extinction, and about how terrible and monstrous human beings are. Then, after five minutes of him complaining about “those jerks on my condo board” and “that idiot across the street,” you realize that he only loves animals because he can lord it over them, unlike with people. Animals only put up with him because they don’t understand the non-stop misanthropy spewing out of him, and he feeds them.

Cause of death: Eaten by rescue dogs, when the dogs eventually chose integrity over free kibble.

(Waiting in New Age Purgatory: The Yoga Fanatic, The Guy Who Insists Everyone Famous is an Illuminati Member, and The Guy Who Became A Satanist Just To Annoy His Parents) 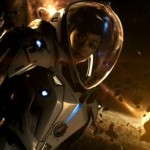 May 25, 2017
Social Justice Warriors Ate My Star Trek!
Next Post

New Visions
A Polite Message From Your Canadian Overlords
It's Your Future: Astrology with Matthew Currie
TRENDING AT PATHEOS New Visions