As a wide-eyed youth, my life was changed forever while sitting in a theater watching a new film called Star Wars. Much of my younger years were dedicated to watching the films and reading the comics and paperbacks and collecting the action figures.

Fortunately, DisLucaKenner has now recognized that there is a specific market niche consisting of original Star Wars fans who (like me) just aren’t getting any younger. Thus they’ve created a new line of action figures called Star Wars: The Old Farts Awaken. I am pleased to present details on the first wave from that new line of products. If it proves profitable (and what about Star Wars isn’t profitable?), a second series will be released featuring characters such as “Terrible Driver Lando Calrissian,” “Too Broke To Retire R2-D2,” and “Catheter Jabba.”

Each figure is newly sculpted and accurately aged, and features new recorded dialog that plays when you press the button on the back. Patheos is proud to announce details on each of these action figures, as presented below:

Like his appearance at the end of The Force Awakens, except a little more bent over, and has a cane instead of a lightsaber.

“It’s going to rain… I can sense it in the joints of my robotic arm.”
“The Force is strong in this one… and it’s making me gassy. I’ll have the ginger ale instead.”
“Alderaan? I’m not going to Alderaan, I’ve gotta get home, it’s late… (pause) …wait, what’s this about Alderaan?”

Everyone’s favorite translation droid hasn’t changed much in the last couple of decades, other than the gold paint job, which is starting to flake off here and there (and in a pattern of scratch marks on his crotch plate). Threepio was never very patient with any species other than humans, despite the fact the he was (literally) built to interact with non-humans.

“Oh dear, where did I leave the remote control? It was probably those Jawas who moved in next door who stole it.”
“I am fluent in over six million forms of communication, but put me through to a supervisor who speaks English!”
“When the forest moon of Endor sends its Ewoks, they’re not sending their best. They’re bringing drugs. They’re bringing crime. They’re rapists…”

Appearance:
His familiar Jedi robes have been replaced by flip flops, blue polyester pants pulled up over his belly, and a red Hawaiian-print shirt — all acquired at the Black Friday sale at Goodwill.

“Senior’s Discount Day at the waffle house, it is. Give me a ride there, you must.”
“Happy it is, your birthday! Five dollars and a Werther’s Original, I give you!”
“Do. Or do not. There is no try. So go out, I do not. Pay cab fare, I will not.”

His fur has gotten more grey, and there are extra tufts of it sprouting from his ears, nose, and eyebrows, and the back of his head is now bald.

(Several examples of the usual Wookiee grunts and howls, all of which start with exactly the same growled phrase which translates as “When I was your age…”)

June 30, 2017
A Polite Message From Your Canadian Overlords
Next Post

Where All Souls Meet
Field Notes on Living
Related posts from It's Your Future: Astrology with Matthew Currie 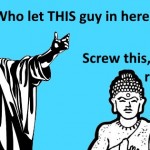 New Visions
The Five Idiots You Meet In New Age...
It's Your Future: Astrology with Matthew Currie
TRENDING AT PATHEOS New Visions