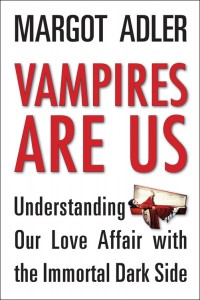 Adler, esteemed author of Drawing Down the Moon, NPR correspondent, and all around neat person from what I can tell, has read 260 vampire books and written a book about it. Vampires Are Us: Understanding our love affair with the immortal dark side, weighing in at only 237 pages, is more of a long essay (55 pages) with annotated bibliography. It’s an easy read. Adler is a delightful companion and story teller. If you want to spend two hours with her, you will enjoy this book. If you’re serious about vampires and/or are seeking some insight into what the subtitle suggests, you will want to use her bibliography to look elsewhere.

Many interesting points are raised in this exploration of vampire themes, but none are ever explored very far. Adler’s biggest point seems to be that we relate to vampires because we are vampires, sucking oil from the earth. This idea is not well developed, and while interesting, doesn’t seem to explain the runaway success of Twilight in the slightest, saying simply that teenagers love Twilight because they are outsiders. While I might agree that vampires appeal to many people for that reason, I don’t think teenagers, certainly not the white, middle class people most often represented in vampire books, are outsiders at all. Middle class teenagers may feel like they are outsiders, as adolescence is a time of developing identity, but teenagers are marketed to like mad – there’s something for every ‘flavor’ of teenager!

I do think that for Pagans, and those who longed for a life outside of the mainstream, monotheistic, overculture, vampire narratives have a lot of appeal, but what is most appealing to me in vampire lore is the role of power. I think humans long for power. Most of us I’ll wager feel distinctly powerless in our lives. What would unlimited strength, influence and eternity feel like? Adler mentions this in passing, but again, never really develops the idea.

Some of my fellow bloggers have covered their love of vampire lore. I was not a vampire fan growing up. I did not read fantasy as a kid. I never watched Buffy the Vampire Slayer when it was on television; I wrote it off as stupid. I mean, a blonde named Buffy saves the world from vampires? Oh please. Then in my 20s I started expanding. I read one Anne Rice book, Memnoch the Devil, on a recommendation for its theological themes. It clearly didn’t mean much to me, because I have no memory of it other than I read it. It was not until I was 28 and coaxed into watching the entire first season of Buffy over a weekend away from graduate school that I realized I was hooked and fascinated with the vampire trope. Since that time I’ve read many more vampire books, both current and ‘classic.’ I’ve seen all of Buffy. I’ve seen some vampire movies, both new and old.*

For me, exploring vampires was a way to explore my unexpressed ‘dark side’ and occult desires, aspects of myself I neither fully acknowledged (even to myself) nor felt safe doing so. Did I want to be the vampire – so powerful and full of control – or did I want to be the victim – enthralled and free of the responsibility of choice?

I see this same struggle in Bella in Twilight. In spite of her vapidity, she wants to join Edward as a vampire to escape the frustrating powerlessness of her human life and join Edward in immortality, settling instead for being cared for by her supernatural guardian angel. So I am not surprised that middle class American  women are sucked in by the “comforting” messages in Twilight. But it makes me sad: in this world, men/patriarchy have the upper hand at the expense of the woman’s interior world and their bodily autonomy.

Adler raises These issues of power but frustratingly never explores them. My criticism of Twilight highlights some of the very topics she raises. The most compelling points she raises remain unexplored, leaving others to do the work that seems only barely begun.

*Some favorites: In books, Julia Kostova’s The Historian, Bram Stoker’s Dracula, the Sookie Stackhouse series. In TV, Buffy the Vampire Slayer. In movies, I loved the Swedish version of Let the Right One In.

Vampires Are Us: Understanding Our Love Affair with the Immortal Dark Side
by Margot Adler
Published by Weiser Books
256 pages
Paperback:  $15.06

Vampires Are Us is a feature in the Patheos Book Club! Click through for more roundtable responses from our Pagan bloggers, vampire video footage, praise from horror novelist Whitley Strieber, and more.

March 17, 2014 Maxim Monday: Recognize Fortune
Recent Comments
6 Comments | Leave a Comment
"Did you ever read about St. Seraphim of Sarov? He is an Orthodox saint who ..."
stonecold What I Miss About Being A ..."
"Contemplation is a good beginning... Introspect, contemplate, initiate and once you find what you seek... ..."
Gourish Bakhshi Shiva the Witch God
"Wiccans can be polytheists too! Jason Mankey deftly proved this at last year's MGW. You ..."
A Witch's Ashram Many Gods West 2016
"Congratulations! I'm glad to hear this will continue. If you'll have a Wiccan among you, ..."
Sable Aradia Many Gods West 2016
Browse Our Archives
Related posts from A Witch's Ashram