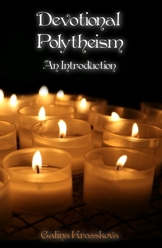 Devotional polytheism is what I “do.” Most Pagans, witches and/or occultists I know are involved to some degree in this practice, even if most people don’t use the term as a label or description. I like it as a descriptor, as it cleanly explains what the bulk of my practice is about. When I saw that Galina Krasskova had written a book on the subject I was immediately interested.

Galina Krasskova is an interesting internet personality. People seem to love her or hate her; few, other than myself, have ambivalent feelings toward her. Krasskova is a polytheist blogger, one that I don’t follow, though after reading her book that might change. I may have had an unfortunate introduction to her writing: she has said some down right mean and bitter things in the past, and that tone put me off. I am pleased to say that her tone overall in Devotional Polytheism is pleasant and encouraging.

The book is in two parts. Part one has chapters on subjects such as basic exercises, altars, ritual, and so on. The second section is basic outlines of how a weekly and yearly practice could look. Krasskova uses her Norse tradition, which doesn’t have much meaning for me, although the point is the structure, and I realize that much of my structure looks similar to hers.

Krasskova begins her book stating – and she reminds us of this throughout – that we get to decide for ourselves what our devotion looks like; the two most important things to remember are respect and consistency. Given that polytheist practices can vary wildly, I thought Krasskova’s basics were a nuanced way of embracing this reality. More importantly I really appreciated her repeated reminders to “start where you start.” Pick a practice and just begin. When it comes to personal devotion, I think just beginning is more important than doing it Right or Formally. Those things might be important later, but starting is the key.

Krasskova and I have many more areas of agreement. She emphasizes personal and spiritual boundaries (super important to me) and she spends time talking about breath work in the forms of grounding and meditation (both forms are also large parts of my practice). Gratitude is central to relationships with her gods, her communities, and her practices; it also important to me in those contexts.

In several places Krasskova bemoans the “potluck and party” attitude most Heathens have in their approach to ritual. I cannot speak to the Heathen community at all, but some of her descriptions of that attitude sound familiar to me. In Feri circles, though, I sometimes find the opposite to be the case: everyone is trying to “out trance” the others! Ritual and community can tricky, no matter the tradition.

My major disagreements with Krasskova are with two sentiments she repeatedly expresses in her book. The first is that devotional work is hard. I really don’t agree. Personally, I find my devotional practices to be a joy. It’s hard only in the sense that doing anything as a grown up is hard: each of us has only so many hours in a day; finding time for all the things we need to do (paid work, cleaning, eating, exercising, and so on) can be daunting. But if it’s important to us, we’ll find a way.

The second area of disagreement is Krasskova’s insistence that “in the face of the Gods, all else should be inconsequential.” Repeatedly, she reminds us that nothing is more important than the Gods. Here we significantly part ways. I disagree. Once upon a time I might have thought this, but now I cannot agree. Part of my divergence here is based on my own theological understanding of the gods and part of it is based on being a parent. While I am of use to my gods and perhaps as beloved by them as they are to me, I am not so important that my devotion and skills are of the utmost importance, nor do I give my life force over to anyone or anything. I might share that life force, I might even submit from instance to instance (gestating and birthing is submission), but never do I subsume my Self. And as a parent, I could not in good in conscience put the gods before my children. At this point they are too young to fare for themselves. It is my duty, my privilege, my honor to put them first. There are times they may not interrupt, but never do the gods “come first.” I have had a god politely let me know that we can work together later, when the kids don’t need me so much. I don’t think that Krasskova has children or dependents. In that case, putting the gods first and foremost is much more possible, if that is her choice and priority. We part ways on that point.

Those two differences aside, I enthusiastically recommend this book. I wish I had had this book several years ago when I began to take my own devotions more seriously. I think I even could have gained much from this book when I was a practicing Christian. The book is encouraging, helpful, and well-written.

One delightful surprise is found at the end of the book. Krasskova includes an appendix, which is basically a series of discussion questions for a novel she loves and has used with her own students. Seeing this appendix made my heart leap! It is CS Lewis’ Til We Have Faces, one of my favorite books of all time. I most certainly think Krasskova and I have more in common than we don’t! Reputation be damned. While I am still making my way through another heavy book for review, I have decided that I am going to re-read Til We Have Faces. It’s been over a decade since I’ve read it. What shall I see in the story now?

Since this is a self-published book through her publishing house and printed on demand I’ll admit that I expected the quality to be weak, but that was not the case. There are a few typos, but nothing out of the ordinary. The cover design is pleasing and the formatting clear and nicely done. While you can get a copy at Amazon for $1.80 less than at Createspace, I recommend purchasing your copy from the latter source, because I think Krasskova gets more of the profit. Enjoy!

November 1, 2014 Home Ownership and Death
Recent Comments
13 Comments | Leave a Comment
"Did you ever read about St. Seraphim of Sarov? He is an Orthodox saint who ..."
stonecold What I Miss About Being A ..."
"Contemplation is a good beginning... Introspect, contemplate, initiate and once you find what you seek... ..."
Gourish Bakhshi Shiva the Witch God
"Wiccans can be polytheists too! Jason Mankey deftly proved this at last year's MGW. You ..."
A Witch's Ashram Many Gods West 2016
"Congratulations! I'm glad to hear this will continue. If you'll have a Wiccan among you, ..."
Sable Aradia Many Gods West 2016
Browse Our Archives
get the latest from
Pagan
Sign up for our newsletter
POPULAR AT PATHEOS Pagan
1