“This is the South. The land is everything.”

-Henry Morgan, speaking in opposition to the proposed Palmetto Pipeline

I’ve talked about this before…the confluence of Southern culture and its love of the land with the reverence for place and the land among modern Pagans.  That love of the land turns up everywhere, in practical matters like the energetic resistance to a new oil pipeline in Georgia and South Carolina, as one of the distinguishing characteristics of “Southern literature,”  and in my own writing of course.  It’s a connecting theme in two publications I have coming out in venues other than Patheos:

My article “Song of the Chattahoochee:  On being a Southern (Pagan) Witch in Atlanta’s Urban Landscape,”  originally published in Sacred Lands and Spiritual Landscapes

, is being reprinted in excerpt form in the upcoming issue of Witches and Pagans.

The new Negative Capability Press anthology Stone River Sky: An Anthology of Georgia Poems is due out next month; you can pre-order it if you follow the link.  My poem “Thirteen Ways of Looking at Blackeyed-Peas”…an homage to Southern cooking, Wallace Stevens, and possibly the way the South and Southerners try to adapt to cultural shifts without losing our identity…is hobnobbing with the likes of Natasha Trethewey (Pulitzer winner, the current Poet Laureate and author of Native Guard and Beyond Katrina: A Meditation on the Mississippi Gulf Coast), Janisse Ray (author of Ecology of a Cracker Childhood), and Jimmy Carter.

Now, I’m the only Pagan I know for sure is in there…along with a friend whom I would describe as non-denominationally Goddessy…but this demonstrates a principle I am fond of expressing as “Run with the big dawgs.”  (I am from Georgia, y’all).  That is, there’s a value to Pagan art and literature and music aimed at a primarily Pagan audience, but there’s also tremendous value in reaching out beyond that to the wider world beyond, and in particular trying to claim a place in the wider cultural conversation.  I think we as a group have things to say, that the rest of the world ought to hear, even if they don’t know it yet.  And I think that sometimes the thing that holds us back from joining that conversation is fear.

I don’t want to pre-empt the new book, so here’s a different Georgia poem that I wrote, originally published in the charity anthology Southern Fried Weirdness: Reconstruction:

She was talking about her mother and her poetry and the zoo,
and she said, “I have a love-hate relationship with alligators.”
I felt deep in my heart that I understood. It was hot and muggy that day.
Somebody else told me, “It’s alligator weather out there.”

Some people are not afraid enough of alligators.
Alligators will not bother you, unless you bother them
or you splash when you swim, or if you are a small child or a poodle.
Being a small dog in the vicinity of an alligator is not wise.

Alligators lie still. They float quiet in the water with their eyes poking up.
Alligators move with surprising swiftness on the land.
People make shoes, boots, hats and handbags from alligators.
Humans eat alligators.
Alligators eat humans sometimes but they do not wear them.
Humans love alligators behind a concrete wall, in a tank, on TV.
There are eleven thousand alligators in the Okeefenokee Swamp.
I do not know how many alligators there are in Georgia as a whole, and neither do you.

My cousin married a woman from Ukraine, where there are no alligators.
They met working on a magazine written in Esperanto. I am not making that up.
They showed her mother photographs of things in the state not country of Georgia.
When she saw a photograph of an alligator, she became concerned.
She was worried about her daughter moving to a place full of alligators.

Of all the things in Georgia I fear,
floods,
whirlwinds,
car crashes,
guns,
Confederate battle flags as political statements,
copperheads,
the legislature,
three kinds of rattlesnake,
poverty and its consequences,
coral snakes,
homophobia,
general hostility towards people like me,
brown recluse spiders,
and right-wing Fundamentalist Republicans,
I am not very worried about alligators.

Of all the things in Georgia I love,
hazy blue mountains,
long lazy rivers,
the people who surprise me with their kindness even though
I have known that kindness all my life,
the way things are funny to them the same way they are funny to me,
when life hurts you, you cry
also when it hurts you, you laugh,
muskedines,
lightning bugs,
thunderstorms, the smell,
lemon smell of magnolia trees in summer,
snow drift of dogwoods in the spring,
boiled peanuts sold by an old guy in a hat by the side of the road
and a million other things including alligators,
I don’t think alligators are my favorite but I like them just fine.

I am not afraid of alligators. I am one of those people.
I took my son to Hunting Island, South Carolina,
camping on the beach in the spring and when we arrived
we learned that alligator mating season had also arrived.
Male alligators bellow deeply in the night, calling out for love.
They won’t bother you unless somehow you get between them and love,
which is never a good idea no matter who it is.
I learned all the facts about alligators from the nature center,
including the part about mating season and poodles and what that noise was.
I told my son he was obviously too big to be eaten by an alligator,
but stick close to me just in case. Later I took him to Okeefenokee.
That is how I know how many alligators live there.

I love and hate and it winds up in my poetry,
but alligators don’t enter into it normally.
An alligator never did anything to me or for me.
If one had, I might feel differently.
I do understand though about poetry,
family, and home, and being just a little bit wary and a little bit in love. 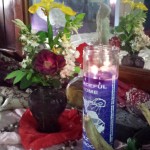 May 18, 2015 Word Magic: The Sator Square
Recent Comments
0 | Leave a Comment
Browse Our Archives
get the latest from
Pagan
Sign up for our newsletter
POPULAR AT PATHEOS Pagan
1