In the wake of Orlando, let’s talk about guns, rights, and social policy.

Rights are not given or guaranteed by the Constitution.

We like to pretend that they are, or that rights exist and must be protected and asserted to stop others from taking them away. But rights don’t exist – they are given, by society. Society decides if you have rights or do not. Alternatively, rights only exist when they are imposed with the power of the State – for example, civil rights were only finally realized, a century after Emancipation, by armed government forces. Today, Muslims have ostensibly the right of freedom of religion, but that right is meaningless in Manhattan, Murfreesboro, and Redmond.

As a subculture, Muslim-Americans are largely impotent when it comes to rights. Which is why…

All Muslims should go out and register for a gun license tomorrow.

This is a provocative statement, but a necessary one, an assertion of rights. It would certainly illuminate the politics of the many parties to the gun control and “radical Islam” debates. I’m not even advocating Muslims go out and necessarily buy a gun – just that we all get our gun licenses or permits or whatever paperwork is required to legally buy a gun. We must assert our own 2nd Amendment rights while we still have access to it. This process varies by state – in California, for example, the first step is to get a Firearms Safety Certificate. The reason for this is simple: it gives us legitimacy when we advocate for our rights. It gives us power to assert those rights. It denies society the power to dismiss those rights.

There is a much more provocative precedent – the Black Panthers’ open-carry, peaceful demonstration at the California State Capitol in 1967, which led to a GOP-sponsored, NRA-approved bill signed by then-Governor Ronald Reagan to strip Californians of open-carry rights. I do not advocate such a brazen display for Muslims, though I admire beyond words the courage of the Panthers who stepped up that day. From their statement outside the capitol building, just before they were arrested on trumped-up charges:

“Black people have begged, prayed, petitioned, demonstrated, and everything else to get the racist power structure of America to right the wrongs which have historically been perpetuated against black people. All of these efforts have been answered by more repression, deceit and hypocrisy. As the aggression of the racist American government escalates in Vietnam, the police agencies of America escalate the oppression of black people throughout the ghettoes of America. Vicious police dogs, cattle prods, and increased patrols have become familiar sights in black communities. City Hall turns a deaf ear to the pleas of black people for relief from this increasing terror.”

Their candid indictment of society is still relevant today, and Muslims will find themselves at the same point if Donald Trump’s proto-fascist movement gains enough foothold this year to survive the inevitable public repudiation at the polls in November. The surveillance of Muslims by the NYPD was just the start, while Muslim condemnations of terror go unheard and Muslim informants preventing terror attacks earn no credit.

Muslims owning guns changes the narrative, especially when it comes to the modern reality that…

The issues of Muslims and gun control are inextricably linked.

I have previously discussed the parallels between Muslims and gun advocates in detail, especially after a tragedy (of which there are more gun-related ones than Muslim-related ones, we must note). My main conclusion was:

To date, responsible gun owners have not followed the example set by Muslims. They are silent in the face of mass shootings – and allow gun ownership radicals to speak for them, turning every somber tragedy into another excuse to push the obscene political talking point that “more guns would have prevented the tragedy”. Unlike Muslims, who understand that there is a problem, gun owners pretend there isn’t one – even though 10,000 Americans die every year from gun violence, whereas if you include 9-11, the average is 300. If you treat 9-11 like the obvious outlier it was, then the average deaths from terrorism is actually 30 per year (Keep in mind this definition of “terrorism” is only limited to radical Muslim violence – rightwing supremacist terrorists have killed twice as many people as radical Muslims since 9-11). Unlike Muslims, gun owners do not accept even the slightest infringement of their 2nd Amendment right in principle. Unlike Muslims, gun owners have not played any role in working with law enforcement and local police to prevent gun violence, even with respect to simple common sense policies like closing gun show loopholes.

My goal is not to shame gun owners, but illustrate the power differential between one group – which is immune from intrusion on their rights by society despite overwhelming public support, and another that is at the mercy of public opinion and whose rights are in the cross-hairs of a massive political movement. One of the reasons for that differential is simple: the one group is armed, and the other is not. It is time to blur that line and in doing so, gain some of that immunity. Seize it, in fact.

Muslim Americans should be skeptics of government attempts to curtail rights.

Unlike the Little Rock Nine, the government is the instrument by which our rights will be denied, rather than enforced. This is why Trump scares us, after all – if he wins the Presidency, he will BE the government, and empower his Legion with government authority and force. As a community, w must be opposed to knee-jerk responses that give the government more power over us.

For example, the so-called “no-fly, no-buy” policy where anyone on the Government No-Fly List is automatically denied a gun, is piling one injustice on another. As Muslims, we are the primary victims of the No-Fly List. Anyone – even an Air Force veteran – can be placed on it with no recourse or appeal. It’s no coincidence that Hillary and Trump agree on this issue – the Democratic establishment retreats to pure fear-mongering for easy political gain, whereas the Republican establishment is at least half-right.

The absolutely indispensable Popehat (Ken White) has an absolutely brilliant piece seductively titled “In Support of a Total Ban on Civilians Owning Firearms” that deserves your full attention. But the main point is this:

Urging vague and unconstrained government power is not how responsible citizens of a free society ought to act. It’s a bad habit and it’s dangerous and irresponsible to promote it.

The article might as well be titled “In Support of a Total and Complete Ban on the Religion of Islam”. We need to make sure we, the Muslim American community, are on the right side of that argument. By endorsing the knee-jerk liberal position that some kind of gun “ban” is needed, we are endorsing the same kind of politics that is being used against us. Conversely…

Muslims have an opportunity to lead, on the issue of gun control.

The gun advocates are right when they say guns are not the cause of mass shootings, people are. Just as we are right when we say Islam is not the cause of terrorism, people are. PEOPLE have to be the focus of legislative action to protect our society from violence. The simple truth is that a gun ban of any sort, especially for something as poorly-defined as an “assault weapon”, is no different from banning minarets or hijab.

Its really, really easy to come up with a solution that would have immediate impact on preventing mass murders and be 2nd-Amendment compatible. The Heller decision, seen as a landmark victory for gun absolutists, actually carries the seed for this protection, by endorsing gun licensing as in no way running afoul of the Constitution. So let’s invoke Heller as precedent. What would such a policy look like?

This is just a starting point. I am sure that gun control advocates and gun advocates alike will take issue for going too far or not far enough. That’s what compromise means. The point is, that there is a vast range of policy in between 2nd Amendment absolutism and mandatory gun confiscation.

Maybe Muslim Americans are uniquely positioned to facilitate that debate. After all, we are the ones caught in the political crossfire. 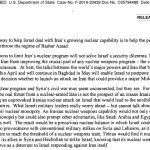 June 21, 2016 Hillary Clinton will escalate in Syria
Recent Comments
0 | Leave a Comment
"The solution is to stop giving the president more power than they were intended to ..."
TinnyWhistler the question of representation
"Well, if our centuries-old system of government doesn't get you the president you want, then ..."
Sean the question of representation
"In this country, by the way, more terrorism is committed by the white right than ..."
Barros Serrano Muslim Americans should be single-issue voters
"It is not only in this day and age. Examine the historical behavior of the ..."
Barros Serrano Muslim Americans should be single-issue voters
Browse Our Archives
get the latest from
Muslim
Sign up for our newsletter
POPULAR AT PATHEOS Muslim
1