Thoughts on Bernie fighting on

What an amazing speech by Bernie Sanders. What struck me the most was that he focused on Trump – to such an extent that I thought he was going to concede the race to Clinton!

Our campaign from Day 1 has understood some very basic points, and that is first, we will not allow right-wing Republicans to control our government. And that is especially true with Donald Trump as the Republican candidate. The American people in my view will never support a candidate whose major theme is bigotry. Who insults Mexicans, who insults Muslims and women and African Americans. We will not allow Donald Trump to become president of the United States.

But we understand that our mission is more than just defeating Trump, it is transforming our country.

This was the framing context for the rest of his speech – telling his supporters in no uncertain terms what the priorities are. Any Bernie Bro who thinks Bernie or Bust or who might consider voting Trump instead of supporting Hillary is being explicitly told here, at the outset, that they are on the wrong train.

The language of Bernie’s speech was entirely action-oriented and empowering:

… we will not allow 57 percent of all new income to go to the top 1 percent. And we will end a corrupt campaign finance system… we will not allow right-wing Republicans to control our government… We will not allow Donald Trump to become president of the United States… we will break up the major banks on Wall Street. And we will join the rest of the industrialized world and guarantee health care to all people as a right. And we will bring about real immigration reform and a path toward citizenship. And we will tell the billionaire class and corporate America that they will start paying their fair share of taxes.

This is not just “Yes We Can” but a far more powerful “Yes We Will.” Bernie reminded his supporters what the goals are of the movement that they, not he, created – and explicitly emphasized that “you all know it is more than Bernie. It is all of us together” in response to chants of “Bernie! Bernie! Bernie!” that began to fill the hall.

Only after laying out the context above, did Bernie say he woudl continue the fight – and then immediately segued into how he was a team player:

I am pretty good at arithmetic, and I know that the fight in front of us is a very, very steep fight, but we will continue to fight for every vote and every delegate we can get. Tonight I had a very kind call from President Obama and I look forward to working with him to ensure that we move this country forward. And tonight, I had a very gracious call from Secretary Clinton and congratulated her on her victories tonight. Our fight is to transform our country and to understand that we are in this together.

The context here is crystal clear. Bernie knows he isn’t going to win the nomination outright, and is making sure that his supporters hear from him now that the priority is defeating Trump and then working together – ie, with the establishment (Obama) and the likely nominee (Hillary) to push the agenda forward. The only way that he can ensure that the agenda laid out above – “social, economic, racial, and environmental justice” – and prevent it from being diluted by “Third Way” Clintonian positioning – is to fight on for every last delegate. Because the final delegate count matters in determining how much voice the Bernie Sanders movement has going forward under a Hillary Administration. That’s the only credible currency that Bernie has with which to press for the issues that matter, so that Hillary stays the course.

Bernie is staying in the race precisely so the future that his supporters believe in can come to pass.

June 6, 2016
No, Hillary Clinton did not clinch the Democratic nomination today
Next Post 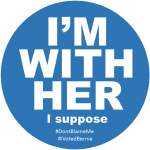 June 9, 2016 I'm with her, I suppose
Recent Comments
0 | Leave a Comment
"The solution is to stop giving the president more power than they were intended to ..."
TinnyWhistler the question of representation
"Well, if our centuries-old system of government doesn't get you the president you want, then ..."
Sean the question of representation
"In this country, by the way, more terrorism is committed by the white right than ..."
Barros Serrano Muslim Americans should be single-issue voters
"It is not only in this day and age. Examine the historical behavior of the ..."
Barros Serrano Muslim Americans should be single-issue voters
Browse Our Archives
get the latest from
Muslim
Sign up for our newsletter
POPULAR AT PATHEOS Muslim
1