I had predicted a 300 EV win for Hillary Clinton. The final results are not yet in as of 2:00 AM EST, but I’m going to bed as Podesta suggested, and projecting a 290-248 victory for Trump, unless I wake up in the morning to find Clinton somehow swept MI, WI, and PA, all three of which she needs to win as things stand. My final map: 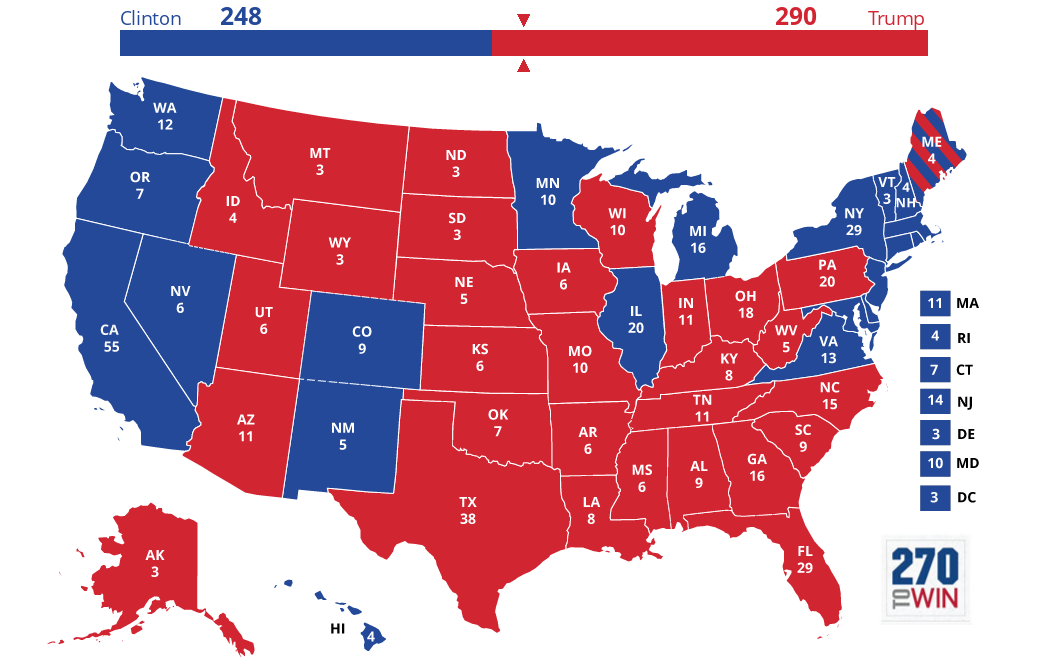 Why was I so confident of a Clinton victory? Simply, because I thought fear would be a better motivator than hope. And in hindsight, it’s obvious how wrong that is, but that’s hindsight for you.

This was a close election – and turnout was far less than 2012. Popular vote raw totals: Hillary 55.5 million, Trump 56.6 million, compared to Romney 61 million and Obama 66 million. Think about that – Hillary turned out 10 million fewer voters than Obama. The gap between Romney and Obama was 5 times that between Hillary and Trump.

What does that tell us? America is not racist, it is apathetic. It no longer believes in its own defining institution. The number of registered voters was the highest ever – 200 million! – and yet only 56% of that total actually voted. Voter registration is easy, voter inspiration is hard. Trump was better at it than Clinton, but barely.

December 17, 2016 unpresidented
Recent Comments
0 | Leave a Comment
"The solution is to stop giving the president more power than they were intended to ..."
TinnyWhistler the question of representation
"Well, if our centuries-old system of government doesn't get you the president you want, then ..."
Sean the question of representation
"In this country, by the way, more terrorism is committed by the white right than ..."
Barros Serrano Muslim Americans should be single-issue voters
"It is not only in this day and age. Examine the historical behavior of the ..."
Barros Serrano Muslim Americans should be single-issue voters
Browse Our Archives
get the latest from
Muslim
Sign up for our newsletter
POPULAR AT PATHEOS Muslim
1