the case for Medicare for all

the case for Medicare for all August 1, 2018 Aziz Poonawalla 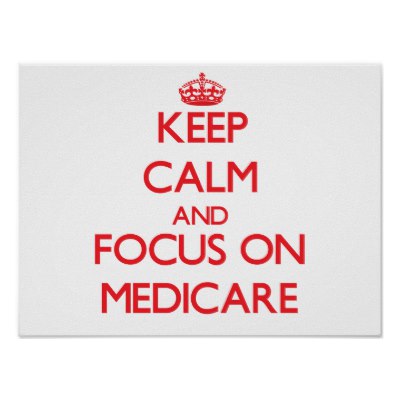 In an attempt to discredit Medicare for All, a libertarian think-tank analyst (who was part of the Bush Administrations aborted attempt at privatizing Social Security right before the economy melted down) ended up actually making the case for it instead.

Taken all together, national health expenditures would total $57.6 trillion through 2031. They’re currently projected to be $59.7 trillion. In other words, Medicare for All would reduce total U.S. spending on healthcare by 3.44%.
…
As outlined by Sanders, health insurance would be provided for all Americans, including those currently uninsured. The government program would cover dental, vision and hearing care for everyone. Deductibles, coinsurance, copayments, and other cost-sharing bills would be eliminated.

Blahous argues that these features would increase healthcare demand and utilization, which he evidently views as an unalloyed sin. But that’s true only if one assumes that all or most of that increased demand would be for unneeded care. Where’s the evidence for that? On the contrary, it’s a safe bet that a good portion of care foregone by uninsured or underinsured individuals and families is, indeed, necessary, and quite a bit of it would contribute to lower spending down the line by treating medical problems before they turn acute or chronic.

The Blahous paper suggests that it’s a shame that all this expanded coverage and improved services would suck up the cost savings created by Medicare for All. According to Blahous’ reckoning, those include $5.3 trillion saved over 10 years by reducing physician and hospital reimbursements to Medicare levels, $846 billion on drug costs from negotiations with drug companies, and $1.57 trillion from reduced administrative costs.

And Jacobin mag also points out why the “$32 Trillion cost” number used by Blahous is misleading:

Federal health expenditures refer to health spending from the federal government in particular. Since the federal government takes on nearly all health spending under Medicare for All, federal health expenditures will necessarily go up a lot, $32.6 trillion over the ten-year period according to Blahous. But this is more of an accounting thing than anything else: rather than paying premiums, deductibles, and co-pays for health care, people will instead pay a tax that is, on average, a bit less than they currently pay into the health care system and, for those on lower incomes, a lot less.

here’s the actual paper by Blahous.

A former Treasury Department economist points out that M4A reduces national health expenditures by $2 Trillion over 10 years – according to Blahous’s own analysis: 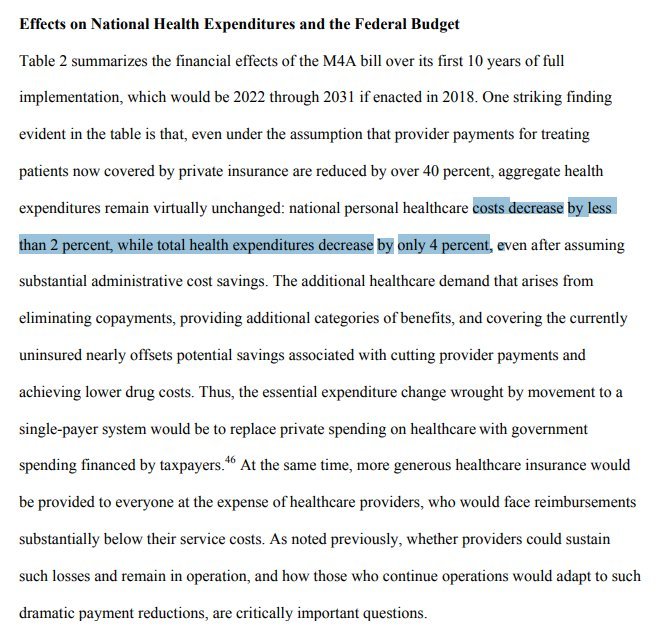 So to summarize: right now the public spends $34 trillion a year. Medicare for All will save the public $2 Trillion. All according to the libertarian analysis which was intended to show that we can’t afford covering everyone.

Do people think this is a good deal? Well, a Fox and Friends poll of their conservative-leaning base has a pretty stark result: 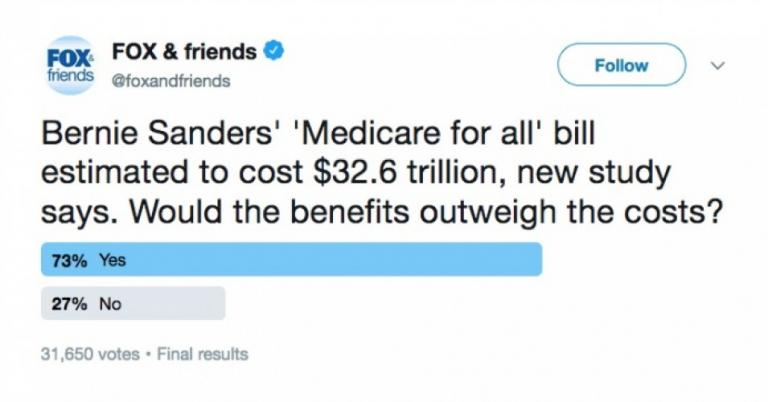 On Fox News, right-wing Daily Caller editor Virginia Kruta reported on how “truly terrifying” it was to attend a rally featuring Alexandria Ocasio-Cortez. Why? Because politicians like Ocasio-Cortez advocate policies that “everybody wants, especially if you’re a parent… They talk about education for your kids, healthcare for your kids, the things that you want.” Indeed.

August 6, 2018 the real swing voter
Recent Comments
0 | Leave a Comment
Browse Our Archives
get the latest from
Muslim
Sign up for our newsletter
POPULAR AT PATHEOS Muslim
1

Is The Table Spread in the...
Ask A (Born Again) Muslim
Related posts from Aziz for America