I have an enormous respect for the way humanity has chosen to describe God. The atheist may mock the “old man in the sky” picture of God as childish, but I admire the same description because it is childish. No, it is not scientifically accurate – nothing is – but it does illustrates a radical accuracy; that we are God’s children. That he is a Father. And that he is above us. Ever noticed that atheists aren’t great at understanding when we’re being metaphorical? Oh well, maybe they’re using metaphors I haven’t picked up on yet…

That being said, there is a major downside to our human view of God being above, of heaven as being “up”. It is this: If heaven is “up” then God looks down on us. We’ve all entertained this idea, that God sees us milling about our days like ants, just waiting for someone to smite. That he is the great eye in the sky, marking down our sins on a celestial notepad.

I believe – and this was struck home to me on a plane ride back to Virginia – that if that’s anyone’s way of seeing humanity, it’s Satan’s. The Enemy sees us as vermin, as a mistake God made, as miserable creatures crawling along the face of the Earth, undeserving of the status God grants to us. The Enemy’s sin is Pride, and Pride sees from above. If anything, God’s view is the opposite. It is personal enough that he became Man, humble enough that he became Bread; he is not above, but in front of us, gazing back.

How do we view others? Eye to eye? I maintain that there is an enormous temptation on the Internet to see everyone from above. To see others as a set of profile pictures and brief descriptions, to underestimate the effect of our words, the effect of our actions, so puny and small our contacts appear on on a 12-inch screen, over emails and com-boxes and chat. 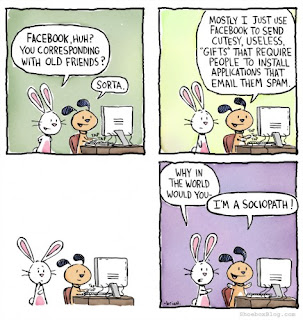 So it would be utterly fantastic if Catholics – perhaps the only human beings left railing against pride (am I proud of that?) – if we could be a witness against that particular side of Internet culture. To undertake the momentous task of overlooking the distance and distortion between humans on the Internet and seeing the souls behind the pixels. I have learnt one effective way of doing this: When someone is in disagreement with you, don’t argue it out on a comment thread where the world can see, and you are actors on a stage, weighing your words not only for the sake of the argument, but for how you to your other Facebook friends, or blog followers, or – heaven forbid – YouTube commenters, but instead asking the individual if he’d like to discuss the issue with you over email, or messages. To make encounters personal instead of public. To make an attempt to develop a relationship instead of just being “The Catholic Type”, instead of, well, being a douche. (Which I have certainly been guilty of being). It would be a great victory if Catholics could be the one’s to baptize the Internet, a digital repeat of what we did in the Dark Ages; to insert some civilization, holiness and humanity in a depressed and hostile culture.

What about you? Any particular disciplines you find useful when communicating on the almighty Web?
Of course, our man Chesterton was always aware of this danger, the temptation that comes with a pride-from-above:

“I think there is something rather dangerous about standing on these high places even to pray,” said Father Brown. “Heights were made to be looked at, not to be looked from.”
“Do you mean that one may fall over,” asked Wilfred.
“I mean that one’s soul may fall if one’s body doesn’t,” said the other priest.
“I scarcely understand you,” remarked Bohun indistinctly.
“Look at that blacksmith, for instance,” went on Father Brown calmly; “a good man, but not a Christian–hard, imperious, unforgiving. Well, his Scotch religion was made up by men who prayed on hills and high crags, and learnt to look down on the world more than to look up at heaven. Humility is the mother of giants. One sees great things from the valley; only small things from the peak.”
“But he–he didn’t do it,” said Bohun tremulously.
“No,” said the other in an odd voice; “we know he didn’t do it.”
After a moment he resumed, looking tranquilly out over the plain with his pale grey eyes. “I knew a man,” he said, “who began by worshipping with others before the altar, but who grew fond of high and lonely places to pray from, corners or niches in the belfry or the spire. And once in one of those dizzy places, where the whole world seemed to turn under him like a wheel, his brain turned also, and he fancied he was God. So that, though he was a good man, he committed a great crime.”

July 30, 2011 5 Reasons Contraceptives Suck
Recent Comments
0 | Leave a Comment
"I don’t know what bible your reading, but if you really think Jesus wanted his ..."
George In Defense of Covering Catholic Churches ..."
"1. Conflates a child's sense of wonder with religion.2. Untold thousands of children have been ..."
Lucius 3 Arguments Atheists Aren’t Allowed To ..."
"Brilliant and mind opener. You're hot! Jajaja"
agusq1970 Modesty Sets Fire
"Great quality content man, I am really impressed with this one. Thanks for sharing this ..."
diksha gupta Culturally Catholic, Baby.
Browse Our Archives
Related posts from Bad Catholic