In his work On the Eternal in Man, the philosopher Max Scheler argued that one must make religious acts. The human being is that type of being who is religious, whether he’d like it or not. This is backed up by the historical research of Mircea Eliade. Man will organize time into the sacred and the secular; organize space into holy and profane ground; say strange, liturgical things at the beginning of public ceremonies; look longingly for an ultimate significance to his life. Mankind will worship. The only question is whether they will worship God or an object of lesser value — the State, sex, comfort, etc.

So too, this homo religiosus will have a perception of a fallen world. From this or that particular evil, the fundamentally religious consciousness cannot help but perceive that “things are not as they ought to be.” The only question is whether we will give this “fallenness” a religious cause and solution, or a finite one.

Secularizing the Fall of Man

Calling some tangible thing “The Problem” seems more sensible than positing an Original Sin that implicates the entire human family in an evil-beset Cosmos. But press the man who says that “it’s all gone to hell now that those [foreigners] are here,” and you’ll find that the problem is not a practical, solvable one. It is an infinite one. There is always some Other who is the problem. Today he may be the Jew, tomorrow the communist, and next week the Catholic. The finite object is infinitized. The Other takes the place of the Fall of Man. Press (certain) feminists and you’ll find that the “patriarchy,” through which we have all the violence of the day, is either inextricably rooted in human psychology (a la Freud, Levi-Strauss, Lacan) or given some origin in a pre-patriarchal Paradise unavailable to historical investigation. In both cases, the problem is not some finite, practical problem — it is The Problem. The nationalist must be eternally vigilant against the arrival of the Other. The (Butlerian) feminist must continually fight against the patriarchy. One can no more solve The Problem than one can solve the sin of Adam and Eve.

Many Marxists have the decency to make this explicit: the true Problem is the warfare of capital and labor within the dialect of production. Few still hope for a finite revolution which will actually establish the worker’s paradise in Russia or Spain. The task has been spiritualized. One can fight from one’s desk at capitalistic-State funded university. One can share socialist memes on Facebook. The Revolution is an infinite effort.

The corporate Silicon-valley class tend to root all problems in a lack of unity, solvable by infinitely greater forms of communication, ending in a never-quite-attained “global community.” Queer theorists posit an obligatory heterosexuality, solved by a constant troubling of the gender binary. Capitalists, especially of the Ayn-Randian ilk, blame the communists and seek salvation in the free market. The New Atheists blame religion — which “poisons everything,” as Christopher Hitchens puts it — and seek salvation in the equally all-consuming and open-ended saviors of Science, Reason and Progress.

Keeping Religion Where it Belongs

We are not losing our religion. We have found altogether too much of it. The removal of the “quaint” religious answers to the problem of the Fall has not led us into a world in which problems and their solutions are finite, practical, and limited. The removal of the religious answer has made secular answers religious. Problems become The Problem. Solutions become Final Solutions. They must: to meet a perception of total brokenness, one must totalize this or that particular instance of brokenness, and thus totalize the solution. The only way to stop positing The Problem is to cease having the religious perception of a broken world. 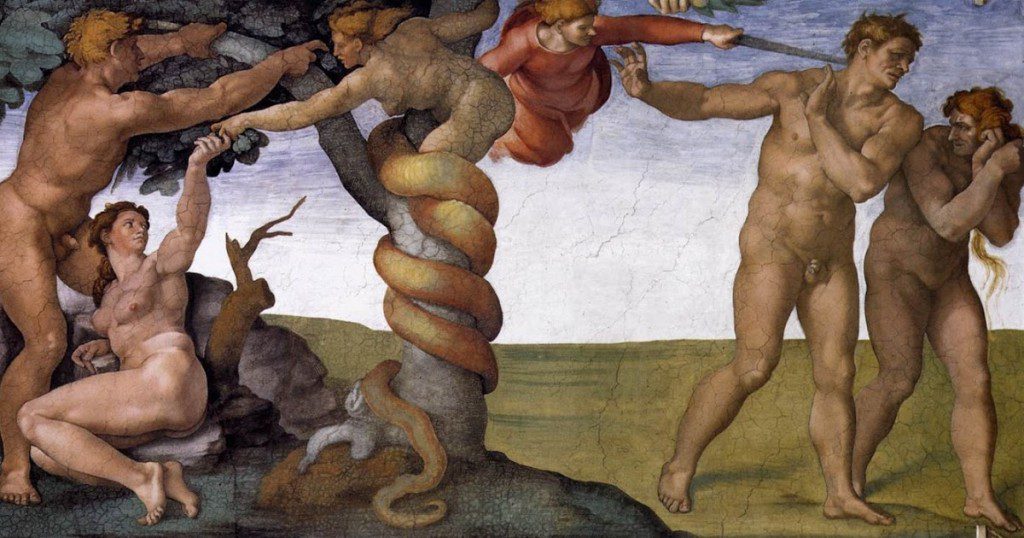 The brightness of this vision does not blind the Christian to the here-and-now — quite the opposite. It is the totalized world-problem that tends to make us apathetic. Whether The Problem is class-warfare, patriarchy, the Other, the government, Climate Change, the Liberals, the New World Order — it is out of our hands. It is too big for us. When we call Climate Change the ultimate problem facing our generation, we are freed — to do very little. When we recognize that a beggar’s poverty comes from the inevitable exploitation of labor by capital, we feel no burn to give him a buck. The problem, after all, is not going to be solved by charity. One must fight the age-old War of the Classes by organizing, protesting, agitating. Do we do these things? No, or at least not now, because now we have to go to work, check Facebook, and so on.

The totalized finite problem puts us in the perfect position of never having to become radical. It is never so big that we need a Savior; always just big enough to assure us that we can’t save anything. A radical change of lifestyle would do nothing to prevent the warming Earth, the oppression of the poor, the globalist Jews, the hidden agenda of the Catholic Church, or whatever The Problem may be — and so we do not change our lives.

Christian Problem-solving in an Overly-religious Age

The Christian is not absolved from solving this-world problems. He is absolved from making this-world problems the object of his religious consciousness. This frees him to act. Because he believes that the whole world is fallen and needs to be saved he is freed from the exhaustion of believing that the whole world is class-warfare and needs an infinite revolution. That humanity sins and needs mercy saves him from the infinite effort of believing that maleness is constituted by a primal rejection of the female as “Other,” who then bears all oppression.

Problems are not The Problem and so problems can be solved. World-salvation is for the Lord, and so neighborhood-salvation is for his people. “The poor you will always have with you,” said Jesus. Thus his followers have it on divine guarantee: no worldly solution will solve the problem. Neither revolution, nor eugenics, nor innovative and compassionate capitalism will remove the poor. “The poor you will always have with you” and thus it is you who will always be responsible for the poor. God decrees it: you may not pawn off the problem onto a total, forthcoming solution. You must practice limited acts of particularized justice. You must give alms, pray, fast, feed the hungry, clothe the naked, harbor the harborless, visit the sick, ransom the captive and bury the dead.

The darkness of Original Sin allows Christians to be light of heart about this or that unoriginal sin. The vastness of the heavenly vision of allows the vision of a heavenly neighborhood — or at least a peaceful one — to remain small and attainable.

This is the great scandal of the Popes towards the Marxists. They do not recommend the never-quite-attained utopia of the classless society. They describe the oppression of labor by capital, not as The Problem, but as a problem. The encyclical Rerum Novarum recommends “friendship between the classes.” We can scoff at the papal solution. (Just be friends? How cute.) But the real horror of the Catholic teaching is that it is genuinely possible. A person with capital and a person who labors can love each other. They can recognize their mutual interdependence and establish a relationship of justice. “If Christian precepts prevail, the respective classes will not only be united in the bonds of friendship, but also in those of brotherly love.” If this is the case, then there is no escape. You are obligated, at every moment, to solve the finite, particular problem of class warfare by particular works of justice.

Christianity limits the religious consciousness to genuinely religious objects. By this limitation, she gives her followers the world as a bucket of non-religious problems with non-religious solutions. Oh, would Christians act accordingly!

January 13, 2017
Why Millennials Want to Change the World
Next Post

January 17, 2017 Towards a New Argument Against Pornography
Recent Comments
0 | Leave a Comment
"I don’t know what bible your reading, but if you really think Jesus wanted his ..."
George In Defense of Covering Catholic Churches ..."
"1. Conflates a child's sense of wonder with religion.2. Untold thousands of children have been ..."
Lucius 3 Arguments Atheists Aren’t Allowed To ..."
"Brilliant and mind opener. You're hot! Jajaja"
agusq1970 Modesty Sets Fire
"Great quality content man, I am really impressed with this one. Thanks for sharing this ..."
diksha gupta Culturally Catholic, Baby.
Browse Our Archives
Related posts from Bad Catholic