There are two ways to look up. The first is done while screaming.

If the world has no value outside of being spewed up by Chance, we cannot aspire to anything but a fear beyond fear; terror in sight of the poker face that is the vastness of space. If the atheists are right, then we are nothing. If Earth truly is an insignificant dust mote swept into an insignificant galaxy by monumental and purposeless brooms, contained in a universe that is one of many, inexplicably and forever cycling, or simply an unthinkable, inscrutable anomaly, what else can a healthy human do but scream, loud and long?

Remember man, that you are mere probability, and to probability you shall return. Probably.

If we are an accident than our actions are accidental. A computer spits out a random sequence of numbers. Can you plug in those numbers to make sense of an equation? The universe spits out a man, alive and speaking. Can man answer the questions of the universe? Can random-man reason his way to the idea that the universe is governed at random? Can random-man speak the following sentence, “the basis of atoms are quarks.” What’s a quark? A concept in the mind of a man made by Chance. Why do man’s thoughts have any grip on reality? If they are merely the workings of atoms in his brain, than how can we trust the thought that his thoughts are merely the working of atoms in his brain? If man looks up, and finds it big and blank with no words written on walls, then man is a riddle with no answer, a desire with no fulfillment, a sentence started and dropped.

What is man worth?

Wait, we, the quarks of the atoms of the cells of the dust-mites on the dust-mote in the dust-pan of the universe, we are the ones who invented dust-pans? We love? We bury our dead in the ground? Then it is not simply the Out that we fear when we gaze up, it is the In. Because a purposeless Out means a purposeless In. If we are accidents then our actions are accidental, and maybe crying at that funeral wasn’t that meaningful after all. Maybe getting married was as purposeful as the Big Bang.

If we can’t know reality, but rather we can only project our own experience as reality, then what becomes of the idea that we project our experiences as reality? Is that real? Is there truthfully no truth?

Now it might be posited that the second way to look up is to yawn. But, as Chesterton puts it, a yawn is only a silent shout. Boredom is not a lack of fear, boredom is a denial of things worth fearing. To look up and see nothing is to look in a mirror; the universe looks back and sees nothing, the universe is as bored with you as you are with it. If you, man, can look up into the vast emptiness, into the Great Mill of Chance and decide it is worth exactly a yawn, what does that make you worth? The screaming resumes. Because if it is all not worth worrying about, then we are certainly not worth worrying about: pass out the nooses, and quickly please.

No, the second way is to look up and laugh.

If we look up and see the obvious work of a Creator, the riddle becomes clear, and it is a joke. The joke is this: You are a small and insignificant dust-mite. Your world is a ridiculous excuse for a planet, stuck around a star; a tiny quark in a tiny atom in a tiny drop of water in a hurricane. You are nothing. But are you ready for it? You are everything. Get it? Do you hear the galaxies laughing? They get it. Can’t you see the quarks grinning? They get it. You are nothing, and you are everything to Me. 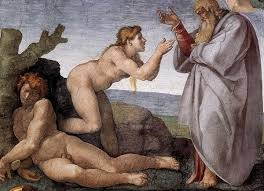 What is value? There is no value assigned by Chance, value can only come from an evaluation, and that’s the one thing Chance cannot have in order to remain Chance!

It’s funny because it makes sense, and makes no sense. You think yourself so small in the vastness of space, but you are only surrounded because space has crowded to do you homage. You correctly think yourself meaningless, and yet you are – in the same moment – the only lump of matter to ever rationalize its way into feeling meaningless, and thus you are very, very meaningful. The atheists are right: you have no value. You have no worth. And yet that is not what you feel. That is not what you know. You feel worth, you feel strength, you feel purpose. Don’t you understand? It’s a joke! You – when you should feel worthless – feel worth. Why? Because I gave it to you.

September 7, 2011 The Inherent Awkardness Of Being Pro-Choice
Recent Comments
0 | Leave a Comment
Browse Our Archives
get the latest from
Catholic
Sign up for our newsletter
POPULAR AT PATHEOS Catholic
1

Catholic
How To Convert
Bad Catholic