I‘m annoyed with moral relativism. This emotion wells up within me not simply because relativism is a ridiculously boring worldview, designed for the sole purpose of justifying petty immorality without the balls to justify heavy immorality. No, I am annoyed because it lied to us. Its advocates said — with remarkably straight faces — that if we would only realize that our quaint conceptions of good and evil were personal and not universal, and if right and wrong could be treated as a matter of taste and not of religious fanaticism, then the world would be a better place. We would flourish, shake off the traditional conceptions of evil that enslaved our minds, and be open to the new, exciting exploration of the human spirit. This all sounds wonderful. What we actually got was the Twilight series. 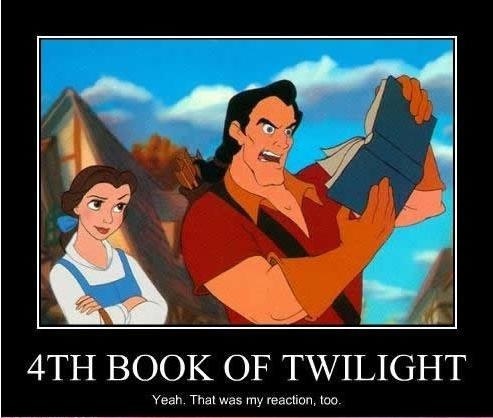 It’s true. The whole movement of relativism can be roughly defined as an attack against fairy-tales. If St. George went off to slay the dragon, the relativist is the man who begs St. George to see things from the dragon’s point of view. He would pull Frodo to one side and say “Look, how do you know the ring is evil and your actions are good? Good and evil are manufactured ideas of society that create conflict. What you believe is wrong might not be what Sauron believes is wrong, and frankly, it’s a bit presumptuous on your part to so harshly impose your morality on him, what with this whole ring-destruction business.” You may laugh and say I exaggerate, but look — for the love of God — at the state of our popular literature.

Vampires, dragons, werewolves, zombies — these things once objectified evil. They made spiritual truths tangible for us. They occur in the fairytale or the fantasy because there is no question of their evil — they are evil in their very being. Sin is sin, and a werewolf is a werewolf. To kill a dragon was to triumph over greed. To kill a vampire was to cast out Satan. There was a symbolism and a sacramentalism that existed in literature, a lovely drawing of objective good and objective evil, and fallen man’s struggle between the two. And what was the result? Beowulf, Dracula, The Lord of the Rings and The Chronicles of Narnia, to name a few.

With the blurring of good and evil into subjective, human inventions came the necessary

blurring of the characters who represented that good and evil. So it was that the previously greedy dragons became man’s best friend and elves got a free-loving, secular humanist makeover in Paolini’s Inheritance Trilogy. Vampires and werewolves — once scary enough to make you convert to Catholicism — got sparkly and sexy in what-her-face’s Twilight series. And, in a move guaranteed to ruin my life, zombies are to be sensual, loving, and in tune with their emotions in a new, Twilight-esque movie — Warm Bodies.

Now let’s be clear. I am not annoyed because these books and films represent the perversion of some sacred form. I am annoyed because they suck. Straying from artistic form is a good and valuable exercise. But in order for it to be good, it requires knowledge of and grounding within that form. T.S. Eliot’s Waste Land worked, not because he said “all traditional poetry is enslaved and embarrassingly trite and I WILL BREAK FREE FROM THE PATRIARCHY!” but because he was grounded in poets like Dante. It is the recognition of a form that makes form-breaking possible. Moral relativism denies the existence of an objective moral structure, and then tries to write a book breaking that structure. Is this not what Meyers did? There was the objective moral symbolism — vampire=evil — and she tried to break from, without ever being grounded in it. How do I know this? Her interview with Entertainment Weekly: “Have you read Bram Stoker’s Dracula? No, but it’s on the list.” Good heavens, woman!

If Meyer was grounded in the Catholic concept of a vampire as an anti-Christ, perhaps she could’ve given the world something remotely interesting in her twisting of the monsters. As it turns out, she grounded herself firmly in a sandpit of hormonal emotions and wish fulfillment, and made millions telling little girls to wait for a flawless guy with a ‘perfectly-toned chest’ to start watching them while they sleep. Then it’s love. True, the terrifying perversion of good and evil might be a sin, but at least it would be a sin worth reading. The vague, relativistic denial of good and evil manifested in our popular literature can’t even muster that. So let’s be clear.

Twilight might’ve had a chance if it contained clear distinctions between evil and good, even if these distinctions were perverted. But in denying the very existence of these distinctions and making the symbol of the vampire neither good nor evil, but misunderstood, and thus succumbing to a literary, moral relativism, the story of Twilight sucked.

Not all hope is lost. J.K. Rowling — by and large — stuck with her guns and wrote a Christ story. And there is still that happy truth that a single page of Lord of the Rings will have more moral and spiritual weight than all of Paolini’s books dropped from a high height onto your face. (No one in their right mind would ask “What would Eragon do?” as the challenges of life arise, but it would certainly be a sane man who turns to the example of Aragorn for guidance.) The point is simply this: If moral relativism brings us Twilight, than I refuse to believe in it. For if any piece of art finds itself entirely alien to the human experience, chances are its philosophical foundation has no place in humanity.

Thanks for reading! I know a lot of folks are new to BadCatholic, so check out some posts you may not have read:

There Is No Such Thing as a Charismatic Mass

January 25, 2012 March For Life 2012
Recent Comments
0 | Leave a Comment
"I don’t know what bible your reading, but if you really think Jesus wanted his ..."
George In Defense of Covering Catholic Churches ..."
"1. Conflates a child's sense of wonder with religion.2. Untold thousands of children have been ..."
Lucius 3 Arguments Atheists Aren’t Allowed To ..."
"Brilliant and mind opener. You're hot! Jajaja"
agusq1970 Modesty Sets Fire
"Great quality content man, I am really impressed with this one. Thanks for sharing this ..."
diksha gupta Culturally Catholic, Baby.
Browse Our Archives
Related posts from Bad Catholic

Catholic
Why Gay Marriage Is a Bad Idea
Bad Catholic