Having tested the waters of agnosticism, the general culture, and a whole host of personal heresies, sins and stupidities, I have come to Walker Percy’s conclusion:

Q: What kind of Catholic are you?

Q: Are you a dogmatic Catholic or an open-minded Catholic?

A: I don’t know what that means . . . . Do you mean do I believe the dogma that the Catholic Church proposes for belief?

Q: How is such a belief possible in this day and age?

A: What else is there?

Q: What do you mean, what else is there? There is humanism, atheism, agnosticism, Marxism, behaviorism, materialism, Buddhism, Muhammadanism, Sufism, astrology, occultism, theosophy.

Q: I don’t understand. Would you exclude, for example, scientific humanism as a rational and honorable alternative?

A: It’s not good enough.

A: This life is too much trouble, far too strange, to arrive at the end of it and then to be asked what you make of it and have to answer “Scientific humanism.” That won’t do. A poor show. Life is a mystery, love is a delight. Therefore I take it as axiomatic that one should settle for nothing less than the infinite mystery and the infinite delight, i.e., God. In fact I demand it. I refuse to settle for anything less.

As far as I’m concerned — though I’m certainly open to scientific humanism making a big, total-fulfillment-of-the-human-person comeback — Catholicism is the addict’s fix, the starving child’s Chipotle burrito, and the UVA student’s pastel shorts and button-downs, etcetera, etcetera, ad infinitum et in saecula saeculorum, amen. What I didn’t realize – how could I? — is that the world would catch up to my particularly brilliant brilliance.

That’s right folks. I woke up this morning and the Church was the shizz. This is first and foremost because we have been rudely placed in the position of rebellion, and of the advocation of civil disobedience. To those who understand the teachings of the Church, this rebellion is nothing new, it has just been suddenly and fantastically stuck in the public eye. (Thank you, Department of Health and Human Services.) The Church already rebels against the twin monsters Socialism and Capitalism in her teachings, and strives instead after the principles of subsidiarity, in which the human person is neither an economic tool nor a cog in the machine. The Church already calls us to rebel against the culture of death, against abortion — of course — but with equal fervor against euthanasia, unjust war, the unjust use of the death penalty, suicide, terrorism, and any attacks on life. But now everyone gets to know that these guys: 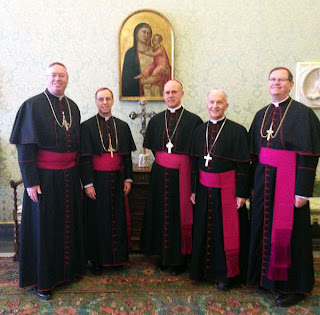 Are all about this:

And, with rapidity, this everyone has been expressing their support. Let’s take NPR, one of the more leftist media outlets. They had the daring to post a piece from the secular The Weekly Standard, which said, amongst other gems:

It’s unclear whether Obama anticipated the blowback which resulted from this announcement, or perhaps even welcomed the fight. The liberal Catholic establishment nearly exploded. Sister Keehan was so horrified she threw her lot in with the more conservative Dolan in full-throated opposition to Obama. Cardinal Roger Mahony, the spectacularly liberal archbishop emeritus of Los Angeles, wrote, “I cannot imagine a more direct and frontal attack on freedom of conscience… This decision must be fought against with all the energies the Catholic community can muster.” Michael Sean Winters, the National Catholic Reporter‘s leftist lion, penned a 1,800-word cri de coeur titled “J’accuse!” in which he declared that, as God was his witness, he would never again vote for Obama. The editors of the Jesuit magazine America denounced a “wrong decision,” while the Washington Post columnist E. J. Dionne called the policy “unconscionable.” When you’ve lost even E.J. and the Jesuits, you’ve lost the church.

Indeed, and such on NPR. This particularly great write-up came with The Atlantic, Laura Ingraham, Hot Air — noting with Rasmussen that the majority of Americans are against the attack on religious liberty — and a whole host of others. But here’s the thing about the Church. Once you begin the radical task of defending Her right to practice what She preaches, you can’t help but notice how excellent that preaching is. Thus the issue of why — precisely — the Church is against the use of artificial contraception is similarly irritating the public eye, and as it turns, ’tis a beautiful irritant. The Business Insider, an entirely secular journal, found it alarming enough to publish Time To Admit It: The Church Has Always Been Right On Birth Control. From the article:

The Church teaches that love, marriage, sex, and procreation are all things that belong together. That’s it. But it’s pretty important. And though the Church has been teaching this for 2,000 years, it’s probably never been as salient as today.

Today’s injunctions against birth control were re-affirmed in a 1968 document by Pope Paul VI called Humanae Vitae.  He warned of four results if the widespread use of contraceptives was accepted:

Does that sound familiar?

Because it sure sounds like what’s been happening for the past 40 years.

So what happened overnight? Why is the Church’s most controversial teaching something that — suddenly — can be affirmed in the secular, public sphere without fear? The teachings didn’t change — they’ve always been awesome. Our culture didn’t change — it continues to suck. No, we owe this shift in disposition to the remarkable act of placing our hands on the desk, pushing firmly down upon it while pushing firmly up with the toes, and straightening the kneecaps until the body is aligned vertically between heaven and earth.

We stood up. The net result of the Bishops’ hardass response, the preaching directed against the mandate in parishes across the country, and the blogosphere’s immature and shrill cry of outrage was this: We are winning, and not just the battle, but hearts along with it. The fact that something as obviously wrong as the HHS mandate happened should be no surprise. In fairness to the Administration, from a brief look of the Catholic Church in America, one may not have known She is still in opposition to the use of artificial contraception. I do not simply speak of the massive level of dissent over the Church’s teaching, I speak of the general lack of confrontation the issue gets from the pulpit, whether the Bishop’s or the parish priest’s. I know it’s easier said than done, and perhaps I speak out of place, but please, priests: When 83% of your flock are in sin, it is your duty to address the issue. Will parishioners walk out on you? Without a shadow of doubt, for the Gospel is a piercing sword at times. But as the net result of standing against the HHS mandate has — thus far — been an outpouring of support and good, so will be the result of an organized stand against the stupidity of artificial contraception. We have learned the power of saying firmly what we believe, and not giving a damn what the world thinks of it. Let us now use it to confront the heart of the modern world — our miserable view of the human body, our utter boredom with the act of sex, and our hostility towards new life.

February 12, 2012 In Case You're Feeling Down and Depressed...
Recent Comments
0 | Leave a Comment
Browse Our Archives
Related posts from Bad Catholic