“The joys of heaven are for most of us, in our present condition, an acquired taste.” I couldn’t agree more with my boy Clive Staples, with whom I hang out on the weekend, smoke pipes and talk about babes. Most of us would dislike Heaven, if ever we were to get there.

Take the modern, “just me, my bible, and Jesus” Christian. He rebels against institutionalized religion — whatever on earth that means — the “huge churches” — as Jeff Bethke put it — the wealth, the incense, the vestments, the gold tabernacles and the altars of stone. These are needless additions to the Christian journey, distractions at best and corruptions at worst. But hark! [the herald angels sing] the best description of Heaven that we have — le Book of Revelation — describes Heaven in precisely these terms — the terms of an old, stodgy, institutionalized religion.

What a marked incongruity between what our culture desires the spiritual life to be — warm, fuzzy, wish-fulfilling, full of spontaneity and Bible studies — and what Heaven is actually described as — a ritual and a Mass!

For people like me, this is something of a relief. If Heaven resembles this:

I’ll take a long, long time in Purgatory, thank you.

But the Evangelical might grow to like it, if only for his beautiful and heroic willingness to conform to God’s will. (Heaven is Catholic? Alright, well, who can fathom Your ways Lord, and all that.) But I suspect the secular world would dislike Heaven for a reason greater than ritual, a reason that nauseates the post-Christian man. And thus I arrive at the actual Point, having fooled you into thinking I’m wrapping up: Modern man would dislike Paradise because modern man dislikes Infinity.

Again, let’s talk to Jack. He describes a Narnian paradise in The Last Battle:

“I see,” she said at last, thoughtfully. “I see now. This garden is like the stable. It is far bigger inside than it was outside.”

“Of course, Daughter of Eve,” said the Faun. “The further up and the further in you go, the bigger everything gets. The inside is larger than the outside.”

Lucy looked hard at the garden and saw that it was not really a garden but a whole world, with its own rivers and woods and sea and mountains. But they were not strange: she knew them all.

“Yes,” said Mr Tumnus, “like an onion: except that as you go in and in, each circle is larger than the last.”

Awesome. Lewis’ description of Heaven is not a static one, but the wild, primal cry of “further up and further in!” And what else could Infinity be but the Evermore, the Further Up and In? It cannot be a finalized state — as if infinite happiness were simply “really happy!” Something finalized is inherently limited. We would become bored with even the greatest of joys, if that joy were a static thing.

Which is why pictures like these make me want to vomit:

But our world — oh God, our bored and boring world — she doesn’t move, she rots. We’ve sterilized all our infinities and dressed them as limited, ending things. There used to exist secular pathways to God and Happiness — bright roads called the Transcendentals — ways of Goodness, of Truth and of Beauty.

Plato, Aristotle and St. Thomas Aquinas all agreed: Goodness, Truth and Beauty are infinite in their nature, and man naturally desires to attain all three. In Christian theology these Infinities are God Himself, and if the bitter, most liberated atheist were simply to pursue but one of them, for no other reason than, say, an unreasonable love of good music, he would find his Maker. (And know Him better — I imagine — than the modern Christian.) But good Philosophy isn’t cool anymore. Plato, after all, was a white, Anglo-saxon, Protestant male.

So now we see goodness as relative. What’s immoral for you is moral for me. But don’t misunderstand my whine: The problem with this modern morality is not that it’s too accepting and tolerant a thing, but that it constricts like a boa. We are forbidden to dive into infinite depths of goodness because, well, what may be good for you might not be good for someone else. If goodness is defined by the individual, it dies with the individual. If goodness is defined by the herd, it dies with the herd. Goodness has been rudely cut short.

Similarly, we’ve made beauty no more than the expression of self — art as a mode of spewing the inner politics of the artist onto a canvas, music score, or theatre stage. But, again, the problem with this modern approach to Beauty is not that it is too loose and free — no, it is too claustrophobic. For if Beauty is defined by the self, it ends with the self. Beauty is limited, under the guise of being freed. Don’t believe me? Adequately defend the popularity of this man’s work:

And we’ve even managed to limit Truth. The old heathen philosophers were fulfilled by their search for Truth because they knew it was search without end. Now we are bombarded with the phrase, “What’s true for you may not be true for me!” If Truth is what you make of it, it is as small and finite as you make it. Our world likes to pretend that such a generous attitude towards Truth leads to pluralism and the resurgence of long forgotten and beautiful tribal religions. Actually, it leads to this: 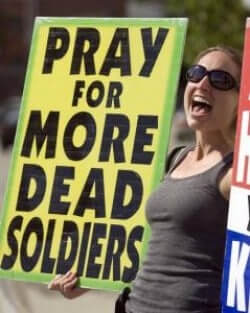 And no coherent answer as to why, precisely, if everyone has their own Truth, we should be annoyed.

Dammit, can’t you see what we’ve done? We’ve taken the Infinities — the things that for all of human history have fulfilled man and had him gasping for more — and we’ve scrawled “The End” across their divine faces. Plato, in his Symposium, noted that all creation is an attempt at achieving Infinity, especially procreation, for one can live on forever in his children. It follows that purposefully restricting our access to Infinity is a sort of castration. With the blade of relativism, we’ve cut off our genitals — those parts that generate, that allow us to ‘live forever.’ We’ve rid ourselves of the Infinites, we’ve burnt down the Transcendentals, and now we find ourselves sterile. Sterile in our art, in our search for Beauty. Sterile in our morals, in our pursuit of Good. Sterile in our thought, in our desire for Truth.

Thus I can only imagine that if modern man were to die and find himself in a place where Goodness, Truth and Beauty were worshipped as one Infinite Being, without end, and without being defined by man, he would be nauseated. “This isn’t heaven, this is bigotry!” If man is spiritually castrated in this life, how will he enjoy the nuptial pleasure of the next, the eros-enflamed Infinity that is Heaven? If we live as eunuchs on this passing Earth we will be only be bored at the eternal Wedding Night of the new.

So it’s shocking to me that my hip, liberated friends are offended at the Christian concept of Hell. Unless we have a resurgent appreciation for the Transcendentals, Hell is the logical consequence of our relativism. It’s a static place, the eternal fires. One need not concern himself with infinite Love, Goodness, Beauty or Truth. In fact, Hell is entirely separate from the Transcendentals, and the soul is instead thrust into his self, into his own misery. I may very well not make it to Heaven, being a terrible Catholic and all, but at the very least, I’d like to. For a culture running in fear from the Infinite, Hell is Heaven and Heaven is Hell, and it seems that we would gladly choose the lonely, claustrophobic flames, over the frightfully objective Infinity of Heaven. The gates of Hell are locked from the inside. Welcome to Paradise: