No Longer Anonymous: Why I Decided to Come Out as a Gay Priest 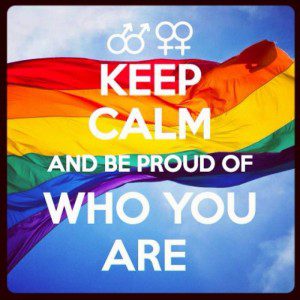 Bravely facing the applause of a world in love with labels, and just in time for the release of a second edition of his new book “Hidden Voices, Reflections of a Gay, Catholic Priest,” Fr. Gary M. Meier came out today and declared himself openly gay to the notoriously unsympathetic Huffington Post.

Bless the man, may the Lord keep him, let His face shine upon him and give him His peace. He’ll be attacked by idiotic Catholics, whose quotes will undoubtedly be used in his up-and-coming “This Has Been Difficult” op-ed. But the sins of hatred will hardly puncture his popularity. I am attacking — with trident and with fire  — his philosophy and his easy critique of Church teaching that will win the blank-eyed nods of every other person who doesn’t give a damn about reading what the Church actually teaches.  He says:

…that’s precisely the message our Church is sharing. LGBT youth are hearing that they are disordered, diseased, defective, damaged goods, wrong when they should be right.

If they are being give this message, it is not by the Church. The message the Church has been consistently giving to LGBTQ youth is the same message she gives to heterosexual youth — you are not your genitals. Stop introducing yourself with your penises.

We take offense at the Church when she says that “homosexual acts are intrinsically disordered,” (CCC 2357) but only because we put her words through the mind-numbing blender of reductionist thought which defines people as being their sexuality, as being heterosexual, being homosexual, being a lesbian, being pansexual, etc. The LGBTQ movement is so concerned with developing and refining their plethora of scientific labels by which to reduce human beings to a word describing their genital behavior that they — and the culture they own — have forgotten a very simple fact. You are not what gives you a boner.

It is by the urging of the Catholic Church that I refuse, reject, and trample on the label heterosexual. Why? Because I will not be defined as being attracted to women. My sexuality is personal, that is, it exists not as an abstract label generally unifying me with other people attracted to the opposite sex, but as an expression of my personal belonging to the bodily world, my personal integration of my soul and my body, which becomes “personal and truly human when it is integrated into the relationship of one person to another” (CCC 2337), with a single, particular, personal, woman, not to a general sex.

But this is far too complex. We want a label to be subsumed into. And thus Meier, in claiming the label “gay,” says “I want the world to know the truth about who I am,” because personal identity has been wonderfully reduced, and we can say — without fear of contradiction — that who I am is gay, or who I am as straight.

This reduction is the primary reason Meier makes the tired, required leap from what the Church says — that homosexuality is disordered — to what he claims the Church says — “LGBT youth are hearing that they are disordered.” Our culture defines individuals by their genital urges, and thus any rejection of a sexual behavior is immediately heard as a rejection of the individual. If who you are is a homosexual, then there is no distinction between being told “homosexuality is disordered” and “you are disordered.” While blurring this distinction and allowing ourselves to exist as walking erections certainly allows for easy, sure-fire, and oh-so-safe criticism of the Catholic Church, how small it renders the human person! What a piece of work becomes man, how lacking in depth, how easily negated, how boring and how bored!

But I believe we prefer this reduction over an honest understanding of Church teaching because we can’t deal with the fact that Our Mother doesn’t allow us to live as ghosts. Sexuality expresses man’s “belonging to the bodily and biological world,” (CCC 2337) and is presented to man not as a completed, scientific fact (Hey, you’re a sapiosexual! Go buy the t-shirt! Wear the ribbon!) but as a project. We are to integrate the soul and body. We are to undertake “an apprenticeship in self-mastery which is a training in human freedom.” (CCC 2339) We are to be our selves — this the world likes — and the self that we are to be is a body — and over this the world induces vomiting.

Our bodies matter. We are not souls trapped in biological cages, souls that might find — to their disappointment — that they “got the wrong body” and thus must explore the label “transgender.” No, we are our bodies. Any integration of the sexuality into the whole person that ignores the body or settles for being opposed to the body is no integration at all. If the body that I am is male, oriented in its inescapable biology to be fruitful with woman, than my personal integration of body and soul cannot be the embrace of homosexual acts, for in this embrace I leave the body behind. I perform acts that contradict the reality of my body, my personal design and my relation to the physical Cosmos. I welcome a ghostliness that neatly separates the reality of my body from the reality of me, as if I could be a me without my body.

Outside of matters involving where people place their genitals, the necessity for integration of the body and soul is usually upheld. An anorexic girl may believe that her normal, healthy body is hideously fat. She may live in the disintegration of soul and body, by which her soul (she) opposes her body by refusing to eat. But it’d be evil to laud this disintegration, this dualistic war by which she lives as a ghost trapped inside the wrong, disgusting, too-fat body. What’s truly loving is the encouragement of body-soul integration, by which a person takes on the project of loving the body she is, of being her body, of living in harmony with the biological functioning of her metabolism, her shape, her natural weight, etc.

We understand this, but having reduced personality to sexuality, we are no longer comfortable giving the exact same loving encouragment to a man who lives as a disintegrated soul and body, who believes he (a woman) is in radical contradiction with his body (male). It would be the social sin of social sins to look upon this man and say, “You are body, and your project is to become properly integrated with your body, and thus become the self who you are.” What he needs is not integration — that medieval fire of red-hot hatred — but a label, and the subsequent social acceptance of that label. Voila, transgenderism, put a “T” in LGB.

This is why Meier comes so close, but misses the mark. He says:

No, homosexuality is not a gift from God, and neither is heterosexuality, metrosexuality, omnisexuality, asexuality, or any of the spreading, metastasizing barcodes by which we categorize unique human beings into sections and subsections and sliding-scales until we can finally sleep at night, comfortable that there is a place for everything and everything in its place, and that we, accurately labeled heterosexuals or homosexuals, belong. I’d sooner set myself on fire than be so comfortably placed, for these “sexualities” don’t exist. Sexuality has no existence apart from people. Sexuality is eminently, beautifully, and incredibly personal, a radical adventure in becoming the self that we are, a self that is neither ghost nor corpse but a synthesis of body and soul, an inseparable union we call the human person. It is not a label, it is a challenge, but we’re so frightened of living as the body and soul that we are — and thus becoming Saints — that we’d much prefer to reduce ourselves into the dust from whence we came, to drift as ghosts inhabiting bodies we can hardly stand to live in.

So Meier will misrepresent Church teaching, The Huffington Post will applaud, Macklemore will write a few more songs, and the labels will multiply like loaves under the hands of Christs. But you, reader, defy. Abolish within yourself the inhuman effort of reduction that would have you cowering like a slave. Take up your cross with that joy that castrates fear and become the embodied self who you are.

May 22, 2013 Far Better To Be Ourselves
Recent Comments
0 | Leave a Comment
"I don’t know what bible your reading, but if you really think Jesus wanted his ..."
George In Defense of Covering Catholic Churches ..."
"1. Conflates a child's sense of wonder with religion.2. Untold thousands of children have been ..."
Lucius 3 Arguments Atheists Aren’t Allowed To ..."
"Brilliant and mind opener. You're hot! Jajaja"
agusq1970 Modesty Sets Fire
"Great quality content man, I am really impressed with this one. Thanks for sharing this ..."
diksha gupta Culturally Catholic, Baby.
Browse Our Archives
Related posts from Bad Catholic