5 Things We Should Think About Before We Say “Slut-Shaming” 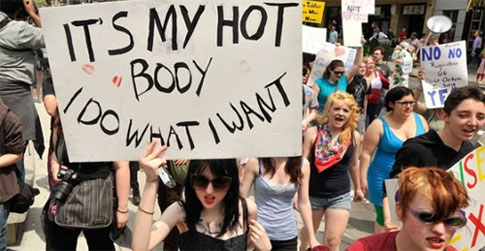 Hyphenate the word “shaming,” and boom, you’ve got a ready-made evil, a buzzword everyone on Facebook agrees is something Very Bad — slut-shaming, body-shaming, single-shaming, fat-shaming, formula-shaming or, ah, sunscreen-shaming. I agree with Mark Peters, when he wrote for Slate that “shaming is probably already finished as a meaningful word,” and even more so with Callie Beusman, when she wrote for Jezebel that “telling someone she’s slut-shaming has mutated into a method of dismissing her argument without engaging with it on any level, of taking issue with her tone and refusing to hear the content.” But the deeper problem seems to be that we are, on a vast, cultural level, completely wrong about what shame is. So pour a few shots, lock your kids in the car, and let’s do philosophy. (Don’t lock your kids in the car. (I don’t know why I say those kinds of things. (Don’t ADHD-shame me though.)))

Shame is not a bad thing. There, I said it. This kicks against certain spheres of empirical psychology, where we read things like “the core concern of shame is a negative focus on one’s notion of self” (1), and that it amounts to “the experience of the self as unattractive, undesirable [and] worthless” (2). But such psychology suffers from an undue focus on pathological manifestations of shame.

It would be odd if there were a human emotion that was simply bad, “counterproductive,” and to be avoided. Shame feels terrible, yes — but so does fear. Fear is a negative emotion, and no one likes to feel it, but it is also useful, productive, and necessary to human flourishing. Without fear, we would not run to protect ourselves and our loved ones from harm. Just as it would be foolish if we were to say “fear feels bad, therefore it is a bad, useless emotion, and all causing fear is immoral,” so it’s foolish to speak of shame as automatically bad and all shaming as something de facto horrible.

Of course fear, like shame, can become pathological. But the very fact that we can have disordered fear-feelings — phobias, unreasonable panic attacks at the possibility of being made to repeat Algebra II — this suggests that there are ordered fear-feelings, productive manifestations of fear that actually serve life, of which phobias are a perversion. So too, the very fact that we can experience pathological shame — the counterproductive, soul-crushing stuff — suggests that there are healthy, natural shame-feelings, of which soul-crippling manifestations are but perversions.

What then, is the life-serving, productive reason for the strange emotion of shame? First of all, and contrary to all this “shaming” talk, shame is not necessarily a reaction to having some negative trait held up to a public gaze. Sure, we often feel shame over perceived negative traits (like being seen as a “slut” or as not having completed puberty thanks to an inability to grow anything resembling a beard (what?)) but we also feel shame about positive traits. A man may burn with shame when he is applauded for his work. A woman may blush we she is spoken to as a “celebrity,” not because she believes her celebrity-status to be a negative trait, but because the gaze which sees her as such is false – she is not just a celebrity, but a particular person, present to herself in all her flaws, private joys and contradictions. We would hardly fault an ignorant public with “compliment-shaming” or “celebrity-shaming” — but these are real experiences. It is our current jargon that sucks, having become so obsessed with the bad feeling of shame that it can only comprehend shame as arising from the public pointing out of some some equally bad trait.

So shame is not concerned with preserving a favorable view of the self. Shame is concerned with the truth. The shaming gaze is one which does not see the truth of the whole person, but limits her to a fixed type, a part. We can feel shame over being seen as a “war hero,” and blush violently whenever some one brings it up, not because we are being criticized, or seen in any kind of negative light, but because we are not being seen in truth. The truth of our selves is so much more — and so much messier — than “war-hero.” It is so much more than “celebrity,” “fast-food worker,” “whore,” or “fatty.” Any gaze which refuses to see this is a violence against our person. It doesn’t matter if this part is a negative or positive trait — if it is elevated above the entire person, it may be a source of shame.

Again — shame is not a bad thing. Shame is an amazing thing, an incredibly useful emotion, a protective feeling that leaps into action whenever we sense an aspect of our person being seen at the expense of the whole. “Shame functions as a psychic shield” which “restores the self to a safe, private, hidden place where it can be reconstituted” (3). In erotic love, it functions like a superpower, telling us — by sending blood into our face and awkwardness into our limbs — whenever we are being used as a part, a merely attractive body, a “boyfriend,” “wifey,” or some perfect, immaculate being. It rises to our aid over words or acts that do not see the whole person, and pushes us to run from them. There is wisdom in every blush, for it is a bodily sign of a spiritual reality, alerting us when we are being treated as something less, more or besides who we are. We feel, before we know, when we are not being loved — when we are being valued for some paltry corner of the entire ecosystem we call our “self.”

This is why reactions of shame — like blushing, flushing, fainting, covering the face, and so forth — are traditionally more associated with women. Not because women are more sinful, or anything equally stupid, but because women seem to have a far greater feeling for personal relationships. Women seem to sense the quality of love between themselves and their friends, spouses, or children long before men, feeling shifts in the social atmosphere and hiccups in surrounding gazes as they shift from seeing the person to seeing something less. This is only to say that women are highly attuned to any lack of love. (Maybe that’s completely sexist. I’m pulling the “I was just explaining the tradition” card, dropping a Browning quote, and moving on.)

In the painful light of a shaming gaze, we squirm with shame, seek to hide ourselves, to remove ourselves to a place where we can be whole again. The feeling of shame is the feeling of trying to pull back into one whole what is, in the gaze of the other, being pulled apart — to be a single, whole person against a force that seeks to divide us into ourselves and some character, a “slut” or a “hero.” Shame presupposes that we have, not knowledge, but a feeling for who we are, an underlying awareness of our whole person — and that this whole has an immense positive value. Against the psychologists who argue that “shame is a negative focus on one’s notion of self,” I would argue, with Max Scheler (4), that shame is always directed towards protecting the positive value of the whole person. In fact, it is only because shame is directed towards a positive value that it can ever feel as bad as it does. If we were to simply consider ourselves as “worthless” without any reference to an abiding “worth” which – in the shameful situation — is threatened, than our worthlessness could not be something painful and offensive. It is precisely because there is a value within ourselves that rejects and protests the charge of being worthless, a slut, or this or that type, that we feel the accusation of as an injustice, something horrible – that which ought not be.

So when we speak of slut-shaming, which we will in my next-ish post, we ought to consider a view of shame that isn’t simply “a bad feeling we inflict on others by our judgmental eyebrows,” but one which affirms the reasonableness of our emotions by considering shame as a useful, positive, and restorative power of the person — which would mean that not all shaming is a bad thing. But oh my, how controversial, better run.

p.s. I put the number 5 in the title because our Internet age is decadent and corrupt, and it’s important to whore oneself in the title. In fairness, I’m sure there were 5 things in there somewhere.

(4) “Shame is not directed to anything of negative value.” Max Scheler, “Shame and Feelings of Modesty,” Person and Self-value, Page 20. Martinus Nijhoff Publishers, Chicago, 1987.

May 25, 2015
Death, Split Selves, and Demons: The Dopest Album on Your Otherwise Dopeless iPod
Next Post

May 29, 2015 Rethinking Slut-shaming
Recent Comments
0 | Leave a Comment
"I don’t know what bible your reading, but if you really think Jesus wanted his ..."
George In Defense of Covering Catholic Churches ..."
"1. Conflates a child's sense of wonder with religion.2. Untold thousands of children have been ..."
Lucius 3 Arguments Atheists Aren’t Allowed To ..."
"Brilliant and mind opener. You're hot! Jajaja"
agusq1970 Modesty Sets Fire
"Great quality content man, I am really impressed with this one. Thanks for sharing this ..."
diksha gupta Culturally Catholic, Baby.
Browse Our Archives
Related posts from Bad Catholic