Who Said It About Sexuality, Slavoj Žižek or Your Catholic Mom

You might think your Catholic mother has nothing in common with the Marxist intellectual and legendary interpreter of Jacques Lacan’s psychoanalysis — Slavoj Žižek. But give the latter a microphone and the former a third glass of wine and the two start to sound fantastically similar on issues of human sexuality. So without further ado, and in the spirit of celebrating the developing illicit love-relation between postmodern philosophy and the Church, I give you the quiz: Who said it, Žižek or your Catholic mom?

1. This book [50 Shades of Grey], it starts on the Internet, no? People are reading more than ever before with this technology, it is disgusting, wholly degenerate.

2. What if, in our postmodern world of ordained transgression, in which the marital commitment is perceived as ridiculously out of time, those who cling to it are the true subversives? What if, today, straight marriage is the most dark and daring of all transgressions?

4. I despise Leftists who think, you know, violence is just an effect of social alienation, blah, blah, blah; once we will get communism, people will live in harmony. No, human nature is absolutely evil and maybe with a better organization of society we could control it a little bit.

5. But this book, the Fifty Shades of Grey book, it is embraced openly, the women read it on public transport…It is the Other without Otherness, utterly obscene. In the liberal society, everything is permitted, every kind of sexuality; not only permitted, it is mandatory. The command everywhere is this: you must Enjoy! The truly radical act, this I claim, is to not enjoy.

6. With this [virtual reality] you will be able to have almost any kind of experience with just about anyone, real or imagined, at any time.” The question to be asked here is: will this still be experienced as “reality”? Is not, for a human being, “reality” ONTOLOGICALLY defined through the minimum of RESISTANCE – real is that which resists, that which is not totally malleable to the caprices of our imagination?

7. I like to live in a society where you do whatever you want. Just please — don’t express yourself too much, you know.

8. I like people who know how to control themselves. I believe in proper manners.

9. The specific human vocation does not rely on the development of man’s inherent potentials (on the awakening of the dormant spiritual forces OR of some genetic program); it is triggered by an external traumatic encounter, by the encounter of the Other’s desire in its impenetrability.

12. The “sublime” moment of the love life occurs when the magic dimension transpires even in the common everyday acts like washing the dishes or cleaning the apartment.

10. The way – the only way – to have an intense and fulfilling personal (sexual) relationship is not for the couple to look into each other’s eyes, forgetting about the world around them, but, while holding hands, to look together outside, at a third point (the Cause for which both are fighting, in which both are engaged).

12. The basic injunction is ‘have a good time’ or to put it in more spiritualist terms ‘realize yourself. This is why I think Dalai Lama is such a big hit. He preaches enlightened egoism; be happy, realize your potentials and so on.

13. When you date online, you have to present yourself there in a certain way putting forward certain qualities. You present an image of yourself. You focus on your idea of how other people should perceive you. But I think that’s not how love functions, even at the very simple level. You cannot ever fall in love with the perfect person. There must be some tiny small disturbing element and it is only through noticing this element that you say, but in spite of that imperfection I love him or her.

14. In December 2006, the New York City authorities declared that the right to chose one’s gender (and so, if necessary, to have the sex-change operation performed) is one of the inalienable human rights – the ultimate Difference, the “transcendental” difference that grounds the very human identity, thus turns into something open to manipulation – the ultimate plasticity of being-human is thoroughly asserted. “Masturbathon” is the ideal form of the sex activity of this trans-gendered subject.

15. There are two topics which determine today’s liberal tolerant attitude towards Others: the respect of Otherness, openness towards it, and the obsessive fear of harassment – in short, the Other is OK insofar as its presence is not intrusive, insofar as the Other is not really Other… In the strict homology with the paradoxical structure of chocolate laxative, tolerance this coincides with its opposite: my duty to be tolerant towards the other effectively means that I should not get too close to him, not to intrude into his/her space – in short, that I should respect his/her intolerance towards my over-proximity. This is what is more and more emerging as the central “human right” in late-capitalist society: the right not to be “harassed,” i.e., to be kept at a safe distance from the others.

One of the tricks to understanding Žižek’s paradoxical and challenging critique of the apathy and banality of postmodern sexuality is to understand him in reference, not just to Lacan and Hegel, but to G.K. Chesterton. Žižek waxes Chestertonian all the time — many thanks to Cosmos in the Lost for first cluing me in on the fact — and this is especially true when it comes to sex and love. As a side note, there’s a lot of ways that Žižek ain’t even a smidgen like your Catholic mom, so if you plan on following some of these quotes down the Žižekian rabbit-hole, you, fair warning: Your sensibilities and ethical principles will probably be offended. 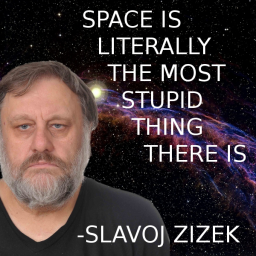 January 19, 2016 How to Speak About Hell
Recent Comments
0 | Leave a Comment
"All political art is lame?"
George Arnold Ghosts With Erections
"I don’t know what bible your reading, but if you really think Jesus wanted his ..."
George In Defense of Covering Catholic Churches ..."
"1. Conflates a child's sense of wonder with religion.2. Untold thousands of children have been ..."
Lucius 3 Arguments Atheists Aren’t Allowed To ..."
"Brilliant and mind opener. You're hot! Jajaja"
agusq1970 Modesty Sets Fire
Browse Our Archives
Related posts from Bad Catholic