Zizek: Straight Marriage is Daring When Ordained Transgression is the Norm!

After watching Linklater’s Boyhood–a portrayal of divorce as boring, normal, quietly despairing, and not at all liberating (there’s more, I’ll talk about it later)–the following thought from Jamie Smith’s Twitter feed really jumped out at me:

Is this not also the best definition of Gaston and Lily [in the film Trouble in Paradise]? Are these two burglars not “placid old cosmic conservatives, happy in the immemorial respectability of apes and wolves,” i.e., living in their paradise before the fall into ethical passion? What is crucial here is the parallel between crime (theft) and sexual promiscuity: what if, in our postmodern world of ordained transgression, in which the marital commitment is perceived as ridiculously out of time, those who cling to it are the true subversives? What if, today, straight marriage is “the most dark and daring of all transgressions”? This, exactly, is the underlying premise of Lubitsch’s Design for Living: a woman leads a satisfied, calm life with two men; as a dangerous experiment, she tries single marriage; however, the attempt miserably fails, and she returns to the safety of living with two men – the participants of this ménage a trois are “placid old cosmic conservatives, happy in the immemorial respectability of apes and wolves.” Exactly the same thing happens in Trouble in Paradise: the true temptation is the respectful marriage of Gaston and Mariette.

The passage comes from an essay by Slavoj Zizek in the collection Theology and the Political. I quoted more above than Smith did in his tweet to give you a little bit more context.

If its sounds Chestertonian to you, then you’re right. Zizek mentions Chesterton in the paragraph that precedes this one. Zizek has also written a book-length engagement with Chesterton, The Puppet and the Dwarf: The Perverse Core of Christianity.

Zizek also appears on my TOP10 list of atheists who engage religion charitably. 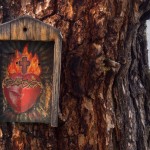 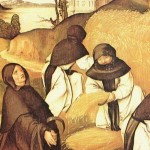 June 7, 2015 No Other Live Options: Why Pater Edmund Was, Is, & Ever Shall Be Catholic
Recent Comments
0 | Leave a Comment
"Wait a minute, what am I missing? The host must contain some gluten, lest it ..."
RPlavo . The Surprising Anti-Capitalist Logic Behind the ..."
"Gluten intolerance is completely -- and I mean completely -- different from celiac disease. Many ..."
Bobby Lawndale The Surprising Anti-Capitalist Logic Behind the ..."
"Read Bruno's comment: #2 below your ranting comment."
Adrienne Szatkowski Michael Voris’s Stunning and Admirable Broken-Hearted ..."
"Science needs "a confession of sins and an articulate profession of faith"? Seriously?Certainly, individual scientists ..."
Elzbieta 2 Reasons Why the March for ..."
Browse Our Archives
get the latest updates from
Cosmos The In Lost
and the Patheos
Catholic
Channel
POPULAR AT PATHEOS Catholic
1