Why Does the World’s Leading Philosopher Remain a Catholic?

Catholic triumphalism isn’t much in fashion these days (except on this blog), but Catholic phenomenologist, Jean-Luc Marion, bucks the trends.

For him there is no option, but to give credit where credit is due.

The “Why remain Catholic?” video interview series, in collaboration with Sam Sorich of Glass Darkly Films, was inaugurated with an interview of Irish philosopher Richard Kearney.

It’s taken nearly two years to run the next installment, but I think you’ll agree it’s been well-worth the wait.

Longtime readers of this blog know that I am a real booster of phenomenology. This early 20th century philosophical movement is the wellnigh the de facto philosophy of Catholicism (along with Thomism), has turned Continental philosophy onto religion, and has transformed Central European history.

The University of Chicago departmental bio below should give you an idea why the subject of our latest interview–Derrida’s former student who founded the French edition of Communio at the behest of Hans Urs von Balthasar (who had his own meditation on why he remained Catholic)–is perhaps the world’s leading philosopher: 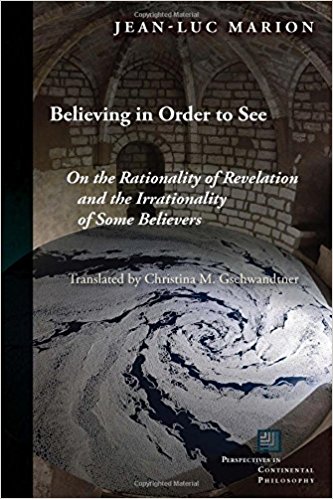 Jean-Luc Marion is Greeley Professor of Catholic Studies and Professor of the Philosophy of Religions and Theology (University of Chicago), Member Académie française (elected 2008)

Jean-Luc Marion studies both the history of modern philosophy and contemporary phenomenology. In the former field, he has published several books on Descartes’ ontology, rational theology, and metaphysics, focusing especially on medieval sources and using modern patterns of interpretation (e.g., On Descartes’ Metaphysical Prism, or Cartesian Questions and Further Cartesian Questions). In the latter field, he is pursuing a long-term inquiry into the question of God, as in The Idol and Distance and God Without Being. Finally, he initiated a phenomenology of givenness in Reduction and Givenness, which was further developed in Being Given: Toward the Phenomenology of Givenness and In Excess: Studies on Saturated Phenomena. This led to the studies in The Erotic Phenomenon: Six Meditations. He has recently published In the Self’s Place: The Approach of Saint Augustine, Negative Certainties and Believing in Order to See: On the Rationality of Revelation and the Irrationality of Some Believers.

Awarded with the 1992 Grand Prix du Philosophie de l’Académie Française, and the 2008 Karl-Jaspers Preis, Professor Marion has also worked in the areas of Greek and Latin patristics; the history of medieval and modern philosophy; aesthetics; and constructive theology.

In other words, Marion has revolutionized at least three fields of contemporary philosophy (Cartesian studies, theology, and the phenomenology of the gift). Yet, people still want to say that Catholic intellectual influence is somehow waning. Let’s celebrate what we actually have right now.

In the following exclusive video interview Marion argues, I don’t want to give away too much here (no pun intended), that there’s no good reason to even consider leaving Catholicism. It’s actually a surprisingly Rabelaisian Catholic argument:

For more on Marion, this time in a more phenomenological mode, see:  Jean-Luc Marion: Does Silencing Love Mean Philosophy is a Misnomer? and What Does Love Know?

Sam Sorich of Glass Darkly Films is an award winning Director/DP from Chicago. His films often focus on themes in philosophy and the Catholic Imagination. His most recent projects include a documentary film on the Life and Legacy of René Girard (set to release in 2018), and is producing an Anthology feature film and art project called “8beats”, which is composed of 8 short films, by 8 Catholic filmmaking and graphic artist teams across the United States, and Canada, capturing the themes of the Beatitudes and tipping a hat to Krzysztof Kieslowski’s Dekalog.

May 19, 2017
Publicity Campaign Freudian Slip: Planned Parenthood Wants You to "Slay" With Them
Next Post

May 28, 2017 Where Does the Body of Christ Go After the Ascension?
Recent Comments
0 | Leave a Comment
"So you in fact did not vote for the lesser of two evils but instead ..."
gethoht Hunter S. Thompson’s Fear and Loathing ..."
"Wait a minute, what am I missing? The host must contain some gluten, lest it ..."
RPlavo . The Surprising Anti-Capitalist Logic Behind the ..."
"Gluten intolerance is completely -- and I mean completely -- different from celiac disease. Many ..."
Bobby Lawndale The Surprising Anti-Capitalist Logic Behind the ..."
"Read Bruno's comment: #2 below your ranting comment."
Adrienne Szatkowski Michael Voris’s Stunning and Admirable Broken-Hearted ..."
Browse Our Archives
Related posts from Cosmos The In Lost