If you think that Catholicism is in some special mess today, then you really have no historical perspective at all.

For example, when we admire their great beauty we frequently forget that the writings of Hans Urs von Balthasar come to us from one of the most crisis-ridden times in Catholic history: Catholicism before Vatican II.

There was so much controversy and backroom dealing during the time that von Balthasar, clearly the most important Catholic theologian of the 20th century, was shut out of the Council, while a tertiary figure such as Hans Kung was invited and given a prominent role.

The blog Fully Christian gives us a surprising view of what that period looked like to an outsider (the author is a convert):

There is no way the Council could have caused the collapse of all denominations in Western Christianity, particularly those of our separated brethren in the Protestant world . . .

. . . Rather, it seems to me, that what really happened was this. Western Christianity was on the precipice of implosion in the 1950s, after the Second World War. The emerging new Western ‘religion’ of the 1950s was psychology and relativism. The plans to throw out tradition, and ‘modernise’ the Catholic Church were already in the works during the 1950s, as well as in the Protestant churches. The movement was gaining steam in the entire Western World. Then in the early 1960s, Vatican II happened, and it happened while Western Christianity was already imploding all around it. Had Vatican II never happened at all, the implosion of Western Catholicism would have been worse not better. I say this because, prior to the Council, most Catholics generally ignored the Scriptures, and saw Catholicism as a list of rules and traditions, not a living and breathing Church organism.  As we have seen in recent decades, Catholics with this mindset cannot withstand the onslaught of Modernism on one hand (which tells them that tradition is obsolete), and Protestant Fundamentalism on the other hand (which tells them that Catholicism contradicts Scripture). On a personal note; as a former Protestant fundamentalist, I can attest that these are the easiest Catholics to convert. They have no concept of what Scripture teaches. They simply follow the rules of the Church. Once you break through that edifice, and show them that what they’re doing ‘appears’ to contradict Scripture, the whole Catholic edifice comes crumbling down rather quickly. I converted plenty of ‘good old fashioned’ Catholics in my day, some who went to the Latin mass and considered themselves ‘traditional’. It was easy pickings. Catholics need to have at least a cursory understanding of Biblical hermeneutics to survive both the onslaught of Modernists and Protestant Fundamentalists. Vatican II put an emphasis on this, and reoriented the Church accordingly.

Yet, we all know the Church did not magically stop being a mess after the Council. One example of this is von Balthasar’s essay “Why Do I Still Remain in the Church?” in the collection Elucidations:

Because, despite the high degree of idiocy we have displayed, the Church has miraculously managed to survive. Indeed, the greater the violence used against her the more radiant her inviolability; the more the Church is humiliated so much more clearly is she seen to occupy her proper place. Jesus and his apostle Paul often speak of the “lowest place.”

He then goes on to develop a Pauline account of a Church of sinners, both arguing against, but also implicitly giving a permanent place, to a particular group of Puritan complainers about the mess:

If they [the emotivist Puritans] refuse, I fail to understand how they can assert they are in the Church and not outside fighting against her. However, let us leave them to their fate or, better, to a gentle Providence who may open their eyes to this truth: a sinless, all-knowing Church that would sell off the old dusty one would be no Church at all but only a Montanist-Donatist-Pelagian sect not worth remaining in and having nothing in common with the Church of Jesus Christ. We leave them to draw that simple conclusion, and proceed to positive argumentation.

I remain in the Church because the old catholica still resembles the Church which leaps to the eyes from the pages of St. Paul’s Epistles and the Acts. Indeed, the resemblance is so striking as to be offputting. The very Corinthians whom Paul lauds “for the grace of God which was given you in Christ Jesus, be-cause in everything you have been enriched in him” (I Cor.1 ff.), he proceeds to denounce in chapter after chapter for forming cliques, for their arrogance and their incontinence, for loveless behavior at the Eucharistic party (the expression comes from a Swiss parish bulletin), finally for their denial of the Resurrection by attempts to rationalize it.

As you can see, this biblically affirms the Catholic mess. Ergo, even though the feces change, the script remains the same!

Those who argue a bland clarity without confusion are neither Catholic, nor biblical (not that the latter matters much).

If you know German, then you’ll love the following film. Even if you don’t, you’ll learn something about von Balthasar by watching it:

You might also be curious why Holly Taylor Coolman and Emily Edmondson remain Catholic.

Please consider making a donation to this blog through the donation button on its homepage.

October 22, 2015
TOP10 Books On Theology and Neuroscience
Next Post 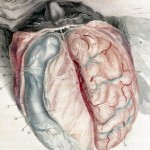