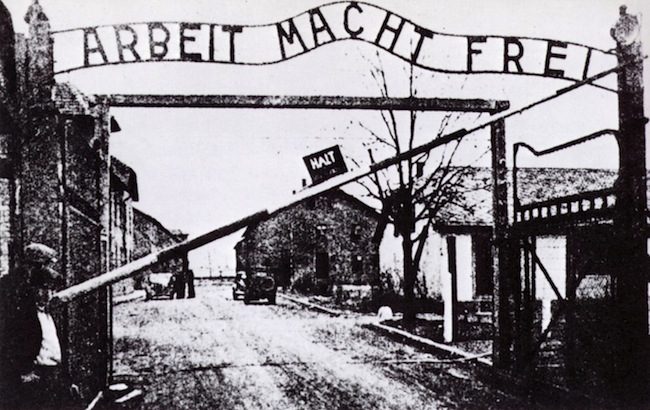 When I argued that the use of images of aborted people to protest abortion indicates our unintentional relation to these people as things, I received in response an inevitable comparison to the images of Jews who were killed at Auschwitz. I suppose this is worth addressing, given that its the only argument I ever hear in favor of the dead-become-signs, and that on the surface, it seems like a reasonable comparison. Both abortion and concentration camps are moral atrocities that make corpses of millions of people. In the case of Auschwitz, we publicized pictures of those corpses in America to show people of the reality of the Holocaust. Why then, would we not do the same for the victims of abortion?

I can think of a few basic problems. First, it does not follow with any sort of necessity that because a method worked in the case of Auschwitz, it ought to be used in the case of abortion. This assumes that morality is equivocal with effectiveness. Morality is not equivocal with effectiveness. Murdering my father and collecting his Knights of Columbus insurance policy would be an effective means of obtaining capital for the revitalization of downtown Steubenville. This doesn’t mean it would be a good thing to do.

For an appeal to Auschwitz to be anything but an offense to reason, it would have to be able to stand as follows: Using images of murdered Jews did not convince anyone of the reality of the Holocaust, and yet it was a morally sound thing to do. Therefore, the pro-life movement should have no qualms using images of murdered fetuses.

But this presses us against the second point. There is a distinction between Auschwitz and abortion being blurred here. The issue at stake was not the rightness or wrongness of the holocaust, but whether the holocaust happened. The issue of abortion, on the other hand, is not whether abortion happens, but whether abortion ought to happen, and on a deeper level, whether the fetus is a person. So the comparison is a false one. We are saying, in essence, that because pictures of Auschwitz showed a public that an event happened, pictures of abortion should be used to a convince a public that abortion ought not happen. We are conflating an is and an ought.

This fundamental difference of intent helps explain why the pictures of our brothers and sisters murdered at Auschwitz inspire relatively little controversy, while pictures of our brothers and sisters murdered by abortionists inspire a lot. The intent of the pictures of Auschwitz, we assume, was to show the reality of the holocaust. The holocaust was displayed for the purpose of displaying the holocaust. The slain were being shown, not used. The pictures re-presented a reality. They were not efforts to achieve a result. This cannot be said of our current use of images of those murdered by abortion, which proclaim to achieve the results of political and ideological conversion.

Admittedly, this a generous assumption. Perhaps the newspapers and the news-reels that showed the bodies at Auschwitz were made with desire to use these images to achieve an effect, to shock, to horrify, to sell more papers, make a political point, convince a complacent public, etc. I’m sure at least some people were excited by the possibility of publishing the atrocity of the century, morbidly willing to use the dead as a means to an end. But if this was the case, than the use of pictures of the murdered at Auschwitz was just as wrong as the use of pictures of the murdered unborn.

I do not believe that pictures of those murdered by abortion should not exist. They should, as evidence, that is, as a showing of the injustice of abortion, just as pictures of the holocaust showed the holocaust. They should be available, shown personally to those who do not believe abortion exists, who believe it some benign and magical termination of pregnancy, for this showing treats the person pictured as he or she is, as a person who was murdered. It shows something that is, it does not use a person as a graphic horrifying enough to convince.

These pictures should not be used to cajol, convince, offend, to shock people out of their complacency, to convert, to win a political victory, or to win any victory at all. The murdered unborn are not symbols to be held in front of an unknown public to convince a face in the crowd of “the atrocity of abortion.” They are pictures of people.

Depersonalization is more than taking a picture. Depersonalization comes when we treat the fetus as something he or she is not. What was done to them is real, and should be shown, but not by the reduction of the dead to a tool and an effective means of argument, but by letting the pictures speak for themselves, in a time, place, and manner that upholds the dignity of the person shown.

Let them be evidence when evidence is required, not arguments when argument is required, for a picture of a dead person is a proper response to the question of whether there is a dead person — not to the question of whether there ought to be a dead person, and more importantly, whether the fetus is a person at all. For, in an objective view of things, nothing could convince me more that a thing is not a person than its dead body plastered on a sign with some sarcastic caption about “choice” by the very ones demanding the recognition of its personhood. Where is the quietness? Where is the terrible silence? Where is the dirge, the pale, the seriousness, the funeral moan and the gut-wrench? Where is the solemnity? Where, for the love of all things, is the liturgy? Our brothers and sisters have been slaughtered, we’ve made them into signs, and we expect the stony-hearted world to relate to these signs as their brothers and sisters? Why not relate to them as signs held up among other signs, that is, precisely as we appear to be holding them?

December 11, 2013 The Oh Hello's
Recent Comments
0 | Leave a Comment
Browse Our Archives
get the latest from
Catholic
Sign up for our newsletter
POPULAR AT PATHEOS Catholic
1