Drawing Stuff on the Pope’s Face 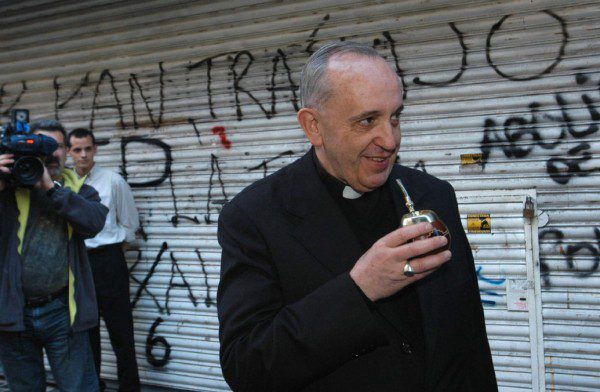 What is really remarkable about Pope Francis is his unremarkable, by-the-books Catholicism — for his is an odd religion with remarkable books to live by. The world rightly raves about the rumors that their Pope is sneaking out of the Vatican to feed the poor, but to the Catholic with the balls to read what his Church demands, these are acts of radical obedience, not radical discontinuity. The Church sayeth:

God blesses those who come to the aid of the poor and rebukes those who turn away from them: “Give to him who begs from you, do not refuse him who would borrow from you”; “you received without pay, give without pay.” It is by what they have done for the poor that Jesus Christ will recognize his chosen ones. When “the poor have the good news preached to them,” it is the sign of Christ’s presence…”Not to enable the poor to share in our goods is to steal from them and deprive them of life. The goods we possess are not ours, but theirs.” (Catechism of the Catholic Church 2443)

What remains amazing is that Catholics are not sneaking out of houses and offices to feed the poor. Our Church says we are stealing from the poor by not giving to them. Considered in this light, Francis — in his undeniable compassion for the materially, spiritually, and culturally groaning — is performing the unremarkable action of not stealing from them. Catholic bloggers are all publicly damning themselves by calling this “a breath of fresh air,” involved as they are in a love affair with a religion that says, in no uncertain terms, that there will either be this very fresh air of mercy and justice in each and every life — or hell.

Our dear Pope calls himself a “son of the Church” and thereby reveals a delicious paradox. Living out the commands of the Church is an obedience so radical that it smacks of disobedience. Taking the Church as Holy Mother is an act of humble submission so out-of-place that it tastes of revolution. We find ourselves looking for the rule Francis is breaking, sniffing for the tradition he is flouting, for surely such a splay of out-there love — such a big, fat, kiss-the-diseased kind of warmth — is rebellion? And we are right, The Huffington Post is right, the look-dad-a-rulebreaker! impulse is absolutely right — but it is because the Church is a rebellion, and Francis is a son of the Church. He says…

“A person once asked me, in a provocative manner, if I approved of homosexuality. I replied with another question: “Tell me: when God looks at a gay person, does he endorse the existence of this person with love, or reject and condemn this person?” We must always consider the person.

…and our noses twitch like bloodhounds, looking for the “up-yours,” only to find a servitude to the demands of the Church who is the damn revolution, who goes so far as to reject all considerations of homosexuality or heterosexuality as possibly delivering identity:

The human person, made in the image and likeness of God, can hardly be adequately described by a reductionist reference to his or her sexual orientation. Every one living on the face of the earth has personal problems and difficulties, but challenges to growth, strengths, talents and gifts as well. Today, the Church provides a badly needed context for the care of the human person when she refuses to consider the person as a “heterosexual” or a “homosexual” and insists that every person has a fundamental Identity: the creature of God, and by grace, his child and heir to eternal life. (Letter, Oct. 1986)

The language of our current culture is limited. It is too small to fit a man like Francis. We have no readily available vocabulary to discuss Catholicism, and it’s about time we stopped pretending otherwise. We are utterly snapped in a dichotomy of the liberal and the conservative, the left and the right, our ideology and its established counter-ideology — what can we do with a man who obeys a higher order? Into what category can we wedge a man who loves gays and excommunicates priests who advocate the priestly ordination of women, a man reviled by Rush Limbaugh while saying things like:

Among the vulnerable for whom the Church wishes to care with particular love and concern are unborn children, the most defenseless and innocent among us. Nowadays efforts are made to deny them their human dignity and to do with them whatever one pleases, taking their lives and passing laws preventing anyone from standing in the way of this [but] human beings are ends in themselves and never a means of resolving other problems. Once this conviction disappears, so do solid and lasting foundations for the defence of human rights, which would always be subject to the passing whims of the powers that be. Reason alone is sufficient to recognize the inviolable value of each single human life, but if we also look at the issue from the standpoint of faith, “every violation of the personal dignity of the human being cries out in vengeance to God and is an offense against the creator of the individual.” (Evangelii Gaudium)

Consider the beautiful actions of The Advocate magazine, beautiful because they are the most accurate description of what the American mind must do with a man like Francis: 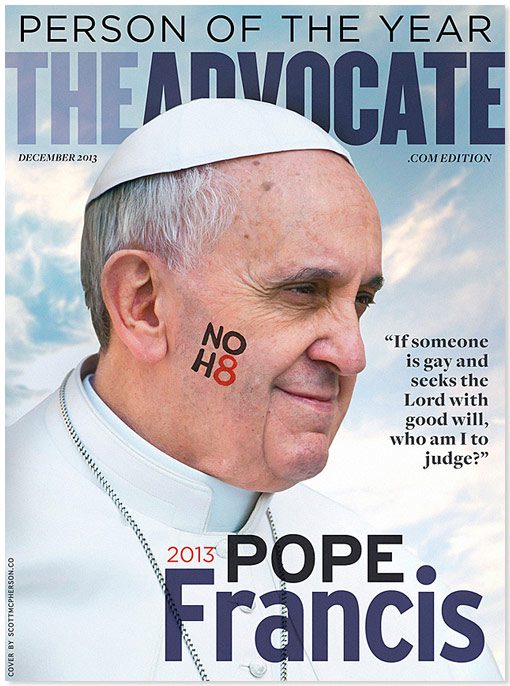 I am happy for their happiness. Francis has extended them a hand of authentic compassion. But surely I’m not the only one who delights in the poetry of the picture! Pope Francis exudes a tradition so nuanced, so rich, with such unique and specific answers to the worries and woes of the world, that we have been reduced to photoshopping our slogans on his face in order to fit him into our pre-ordained systems of thought. With realities like this, who need metaphors? We are drawing the language of our culture on the Pope’s face.

But this desperate need to brand and tattoo the non-conforming among us, our near-biological urge for all things to fit into their sacred place within The Very Important Culture Wars, all this only bears witness to the inability of Francis to be contained to the world — a happy handicap shared by every Catholic who wakes up and decides to be Catholic. The need to make something out of Francis is evidence that we cannot make head or tail of him.

In truth, I have little else to say besides the hope that we follow suit, all of us living lives bursting from this boring, abysmal tupperware of current culture. It is no difficult thing. We need only follow the example of our Holy Father, to become with him true sons and daughters of the Church. Being Catholic — not screwing around, really being the thing — is a panting pursuit of all the ways we become fully alive and fully ourselves. It is the liberty to be ourselves, and, in this marvelous singularity, to be wrenched from all reductions, all systems, imitations, fashions and passing fads. Let us live this Pope Francis stuff, this radical obedience that tastes like rebellion, to the point that our weary world is reduced to drawing what they want us to be on our faces.