The Christian is hooked on either side and stretched between two disparate statements about his death: “Remember that you are dust” — muttered by Catholic priests as they draw a cross of ashes on the believing brow — and “Remember, O Christian, your dignity” — the mighty words of Pope Saint Leo the Great, extolling us to marvel over the fact that we are destined to live forever, sharing “in God’s own nature.”

“…and to dust you shall return,” the priests finish, pushing us into the deep dark of Lent. That is, you will die, disintegrate into the indifferent atomic stuff of the universe, a brief blip on a cosmic radar that neither knows nor cares about your presence. Or, as Josemaria Escriva puts it: “Before long — years, days, — you will be a heap of rotting flesh: worms, foul-smelling liquids, filthy shreds of cloth, and no one, on earth, will remember you.” And yet “you have been rescued from the power of darkness and brought into the light of God’s kingdom,” says the Pope Saint — you will not die, you will live forever with the God who made you.

Why this contradiction? Why is the dust of death not simply undone by the hope of Resurrection? Surely the Christian who believes he will live forever should drop his morbidity, his memento moris, his depressing notions of death as The End, The Rotting, Full Stop, and Final Fix. For, as a matter of belief, such views of death are over. “Death thou shalt die,” no more the misery of the Psalmist: 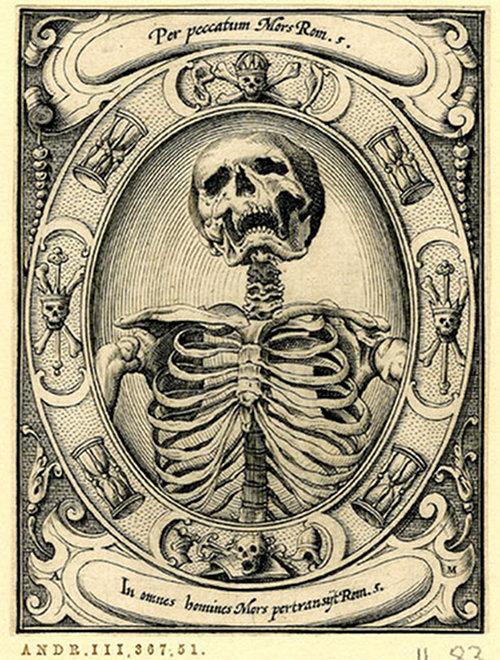 What gain is there from my lifeblood,
from my going down to the grave?
Does dust give you thanks
or declare your faithfulness?

Death-as-end and death-as-not-the-end creates a disharmony in the Faith, but it is a disharmony pregnant with its own resolution, aching for the next chord. The Christian carries this contradiction — a “returning to dust” and a “living forever” — because he hopes for eternal life. He does not, or ought not, expect it.

It might seem like a pious Christianism, to expect eternal life, to think of death as a mere “transition” into a Whole New World, to speak, in the vocabulary of those blindingly dull obituary notices, of our loved one’s “being in a better place,” moving on, and having their souls carried up to God by the angels — as if it were all simply a matter of course! As if Christianity were the revelation, not of salvation, but of the world’s having “gotten it wrong” about death, and the Christian is simply the one who, with some inside information, knows death is really just a phase, an illusion, and a passing-into-something-else. It is precisely this mentality that hankers after near-death experiences as proof of Heaven, that looks for “objective evidence” of the afterlife — and it is precisely this mentality that remains unchristian. For we do not expect Heaven as something which simply follows on upon life as Act II follows Act I, as something which could be ‘proven’ by peeping behind the curtains and seeing the set pieces lined up and waiting.

We hope for Heaven because we were promised by the person of Jesus Christ — that he would put us there. Our certainty does not lie in Heaven being observable as an object, nor in our reasoning, nor in some feeling of being owed Heaven. In short, our hope for Heaven does not have its source in us, but in another whose promise we believe.

This is in accord with the nature of expectation and hope. I expect my paycheck — I do not hope for it. I expect Wednesday to follow Tuesday and day to follow night — I do not, under ordinary conditions, hope for it. Expectation, then, achieves what it expects as something already owed to it, already known by it — something it “already has.” To simply expect Heaven, to rid ourselves of trembling in the face of death, to not consider just dying, keeling over and becoming foul-smelling-liquid-the-end-thanks-for-playing as a real possibility — this is to pretend that we already have Heaven, that it is owed to us, that it does not come from the surprising and unexpected gift of another.

I do not already know what I hope for, nor I do not think I am already owed what I hope for, rather, I desire what I hope for. Expectation does not imply any desire, for I may expect Tuesday to follow after Monday without any particularly erotic surge. But hope is always a desire — indeed, I cannot imagine hoping for anything apart from it. Thus there is no rejoicing when an expectation is fulfilled — we simply expect Tuesday to follow Monday — but there is wild rejoicing when a hope is fulfilled — for we desired the good that we hoped for. This is what is particularly flaccid about a religion that claims “you won’t really die, you actually just go to Heaven.” Such thought is neither to desire, nor to rejoice, nor to be thankful, but to presume — and presumption is boring as the brat who expects his birthday presents.

The certainty of hope is not a certainty that annuls the surprise, the terrible shock, the givenness and utter unexpectedness of that which is hoped for. A husband who expects his wife to love him has certainty that she will, but it is a perverse, unloving certainty which views her love as a matter of course, as something established with the given fact of her being his wife, following with logical necessity, as if it was not entirely dependent on her upholding of the promise, as if she were not free to not love him, as if her love is not still a gift, a gratuitous blessing and a surprise that he does not deserve, at each and every moment it is given! The man who hopes in the love of his wife, on the other hand, maintains the right relation to her love — it is always surprising, always a gift, always outside of the expected and the owed. And thus it is, properly speaking, always a response of love to love, for hope is always a desire for the good one hopes for, an eros, a burning-for — while expectation can be without desire for the thing expected, as I may fully expect to get the flu, fall into debt, and watch my loved ones die.

So the Christian is dust, and he harbors within himself the knowledge that he will return to dust and that this crumbling of self into primordial soup is an entirely legitimate expectation — for he is not owed continued existence, nor can ascertain the necessity of continued existence beyond any reasonable doubt, nor does any evidence of continued existence give itself to him, at least nothing beyond the overwhelming counter evidence of death really being an end. Far from being unchristian, this repetition that I am ashes and I will return to ashes, that I am dust and I will return to dust, that there is nothing to gain from my going into the grave — this forms the necessary condition for hope in salvation. For hope arrives as a warrior, dispelling the darkness. The person of Christ promises salvation, not as a matter of course, but as an act he will perform, and the certainty that I will rise and not simply return to dust is a consequence of being surprised and dumbstruck by this promise — and yet believing. This put things in the right order: I desire to be saved, and salvation is never something I can expect. It is a shocking lurch away from the pit. So Lent gives us the opportunity to meditate on our death, and Easter gives us the opportunity to meditate on the promise that we will not die, and the two taken together allow us to hope in and never to expect our salvation — and hope does not disappoint.

February 22, 2015 The Difference Between a Martyr and a Victim
Recent Comments
0 | Leave a Comment
Browse Our Archives
Related posts from Bad Catholic