Artists have been coming to Steubenville, OH, getting their hands dirty with The Harmonium Project, playing music in the podunkiest to prettiest of places, all to be a source of community and cultural-economic development in a strange, distributist-y, local-business-y, neighbor-loving kind of way — and I haven’t said a thing about it. This is some kind of sin of omission. The Harmonium Project is the most badass smoosh of indie music and Holy Church since St. Thomas Aquinas released his first EP.

I want to highlight Jenny & Tyler today. They brought their husband-and-wife sweet-sad-soulful folk to the basement of the Presbyterians on 4th Street (where the assistant pastor is a Phishhead who loved Frisbee golf, forever screwing up my vision of Calvinists). We got this video of them before the doors opened:

Tyler and Jenny make all sorts of music, they’re big on the social justice front (as one ought to be in order to build the kingdom, avoid hell, get nifty t-shirts, etc.), and they have some free stuff online (which, since its Lent, you should just consider almsgiving and snag.) We got to talk foot-cymbals, iconography, communion, latin-rite liturgy, and cat-allergies, and it was all so interesting that I had to interview Tyler after the show: 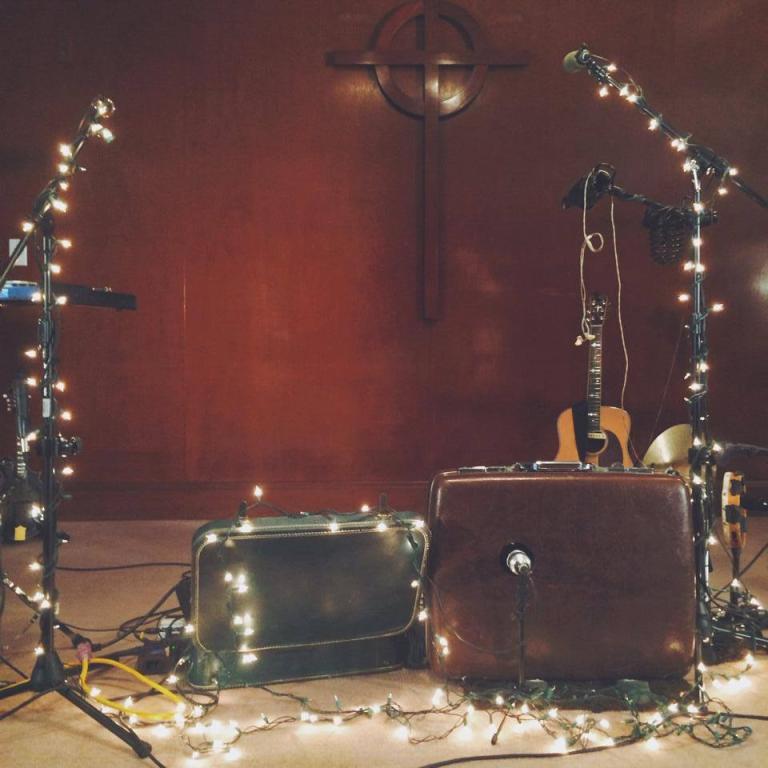 Why, in one sentence, do you believe in God?

I believe in God because it seems like it’s harder not to.

What, in one sentence, is wrong with the world?

To quote Chesterton, “I am.”

Is there such a thing as Christian music?

To paraphrase Derek Webb, we don’t think there is a such thing as “Christian” music, as music in and of itself does have a soul and, therefore, cannot be saved from hell. I think that when believers in Jesus make music they are communicating truth in some way or another and faith ultimately influences that music, specifically the lyrics. I think that Christian theological undertones are usually present in the lyrics that believers in Jesus write.

You’ve played all sorts of charity concerts, donated songs to organizations promoting peace and justice, and written lyrics specifically about “issues” such as the travesty of sex slavery. What is the relationship between music and justice? Can a song promote a cause without becoming political? Should music really be so “involved” in the world — shouldn’t it transcend and lift us out of it?

Music is born out of the experience of life, and as such represents many different facets of life. Naturally, then, a musician who is passionate about justice may write a song about justice. Music is the best way for us to communicate our ideals, questions, struggles, hopes, etc. And hopefully those things resonate with listeners. We’re journeying together and it isn’t reasonable to think that every song should lift us out of the hard places that can be so present along the way. It’s definitely possible for a song to promote a cause without becoming political, especially if the cause isn’t political. For example, most people would agree that human-trafficking is wrong.

You’ve played for secular audiences, Protestants, Catholics, and the unaffiliated Christians. Who, out of all the various denominations, is the best-looking? And more to the point, can you feel the differences between playing for, say, Calvinists as for non-denominationals? Okay, really, really to the point — do you think differences in doctrine effect how we encounter and react to music?

I think that differences in doctrine can definitely affect how we encounter and react to music. I’ve known people who won’t listen to Caedmon’s Call because reformed theology is often present in their music. I think that’s pretty silly, but obviously what we believe affects how we react to art. When I listen to music that promotes one-night stands, drunkenness, etc., I usually don’t enjoy it, even if it’s good art. For me, and for many of us in general, it’s difficult to look past the content of the lyrics.

Josef Pieper says: “Only the lover sings.” All of your songs, unless I’m missing one, are about love or come from love. What about love makes music? And do different loves make different music?

All of our music is about love in one way or another.  Our new record is even more intentional about this.  We’ve got songs about God, our siblings, our daughter, and each other.  Yes, different loves make different music.  A song about romantic love will (or should) sound different than a song about my child or brother.

Hanging with Jenny & Tyler and hearing the humanity behind their heavenly hymns was a real testament to the binding and revitalizing power of music. Check out their stuff. Support The Harmonium Project, neighbor-love, Christian unity, and the invigoration of human culture through big ol’ spirations of communio.

March 17, 2015 How I Learned to Stop Worrying and LOVE My Smartphone
Recent Comments
0 | Leave a Comment
"All political art is lame?"
George Arnold Ghosts With Erections
"I don’t know what bible your reading, but if you really think Jesus wanted his ..."
George In Defense of Covering Catholic Churches ..."
"1. Conflates a child's sense of wonder with religion.2. Untold thousands of children have been ..."
Lucius 3 Arguments Atheists Aren’t Allowed To ..."
"Brilliant and mind opener. You're hot! Jajaja"
agusq1970 Modesty Sets Fire
Browse Our Archives
Related posts from Bad Catholic