As infants, we do not know the mother we are born to. She is food, drink, shelter, warmth, safety, affection, comfort, touch. She is the fulfillment of our needs. She is only thought of as “mother” — distinguishable from our desire, and indeed, distinguishable from one, dyadic mother-child phenomenon — at a later date. We “loved her before we knew her,” and it is only because we first loved her that we can know her at all. She is present and available to all our future cognitive acts because she is first held within the precognitive mode of desire. She is “lit up” in our field of consciousness as needed and fulfilling, and thus she is available to being known beyond mere need-fulfillment — as “mother,” “parent,” “other.”

If all this is true, then there is an experience of a primacy of desire in our human origins, one which can shed light on our proposed divine origins. This idea first began bugging me in my encounters with erudite, passionate atheists, who related with a kind of fierce intensity to the God who does not exist. I know that laying out my thesis pedantically and without apology will lead to the just criticism that I am “telling atheists what they really believe” instead of letting them speak for themselves. But I would rather suffer the criticism of being boorish than undergo a complex argument without any sense of the point I am trying elucidate.

So: Atheism seems to rely on a background desire — a love, a hate, an attraction or a repulsion — towards God. If the atheist can say “there is no God” and mean what he says, it is only because God is “on the map” for him, “lit up” in his field of consciousness, present and available to negation and affirmation because already held in the pre-cognitive mode of desire. This would make sense of why there are no neutral, passionless negations of God’s existence any more than there are affirmations. If “the desire for God is written in the human heart,” then a negation as much as an affirmation must be a matter of the heart.

As evidence, though certainly not proof, I would ask negatively: If it is not the negation of a person already experienced as a “desire of the heart,” then who, precisely, does the atheist say “does not exist?”

After all, the he cannot say “God does not exist” and means it absolutely. If God is nothing more than a non-existence, then all the atheist says is “that which does not exist” does not exist — which is hardly remarkable. A pure nothingness cannot be wrestled with. The natural move, then, if we want more than tautology, would be to say, “When I say God does not exist, I am hardly referring to a particular “non-existence” I’ve recently encountered. I am denying that the concept of God obtains in reality.”

But Christianity argues that the reality of God surpasses our concepts of Him. To exclude a positive concept of God from existence, while it may be satisfying for the atheist, hardly effects a God who transcends all positive concepts of “God.” Thus Jean-Luc Marion: 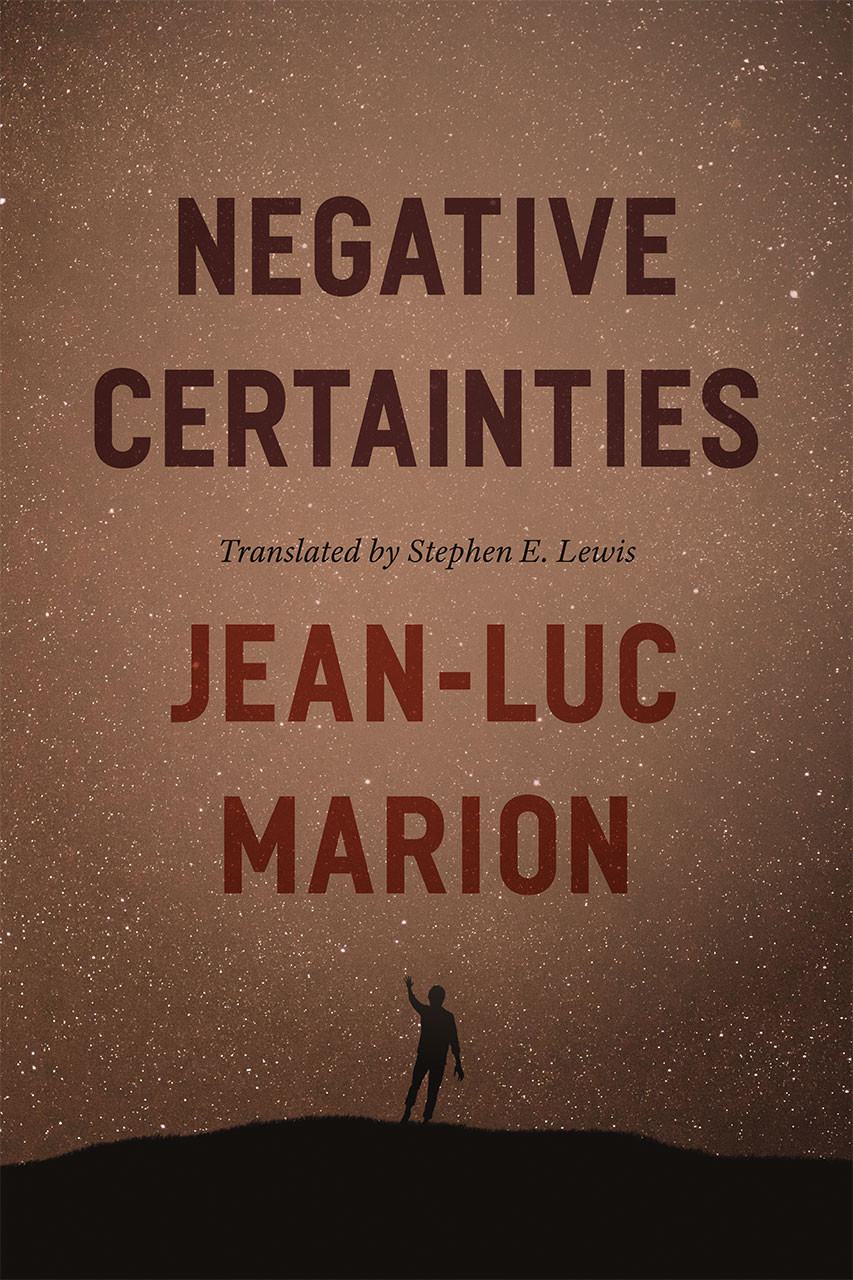 Because the death of God, in order to identify this “death” as that of a particular “god” or even of “God,” must necessarily assume a particular concept of his essence (the “moral God,” the “final cause,” etc.), it thus disqualifies in each case only that which corresponds to this sole concept, leaving all the others still to be reviewed and critiqued…[E]ach refutation [of God] refutes itself, since it only every refutes one definition that is by definition inadequate of the essence of “God”… It could establish and stabilize itself only if the same concept assured it of of the adequate essence of “God” and, at the same time, its refutation.” (Marion, Negative Certainties)

And, since it is impossible for us to have any adequate conceptual knowledge of God, since “the impossibility of assigning a concept to God…lies in God’s very definition — which is that he admits of none,” or, as Aquinas puts it, since “in no way is God comprehended either by intellect, or in any other way; forasmuch as He is infinite and cannot be included in any finite being” (I, Q 12, A. 7), atheism reveals itself as an impossible project, just as much as any theism which attempts to “define” or “comprehend” God is an impossible project. This, I suppose, is where most atheism finds itself, in the rejection of an inadequate concept of God, just as a purely intellectual theism finds itself in the affirmation of the same.

We can say that unicorns do not exist only because we a comprehension of what it is that we are rejecting, namely, a horned horse. Were one to say “unicorns do not exist,” and, when asked what a unicorn is, answer “a unicorn is that of which no human concept is an adequate expression and of which no claim to comprehension is possible” it would be fair to say, “How then, are you certain that it does not exist? Might you not just be rejecting an inadequate concept of ‘unicorn’?” But this is precisely the Christian’s claim about God.

At which point the atheist, suspecting a trick, may do one of two things. He may reject the claim that God transcends our concepts of Him, and argue that the God who does not transcend our concepts of God does not exist. At this point no further argument is possible. Every Christian with a knowledge of Scripture and Tradition is an atheist in regard to a conceptually comprehended God. Otherwise, he may say, “Well hold on, if I cannot deny the existence of God because he transcends our concepts of him, neither can the Christian affirm the existence of God.” But this slams us back into our first idea, that “the desire for God is written in the human heart.” (CCC 27) The Christian’s reference is not to a concept of God alone, but to God as he is loved. When Aquinas argued that “in no way is God comprehended either by intellect, or in any other way,” he immediately follows this with “but in another sense “comprehension” is taken more largely as opposed to “non-attainment”; for he who attains to anyone is said to comprehend him when he attains to him. And in this sense God is comprehended by the blessed, according to the words, “I held him, and I will not let him go” (Canticles 3:4).” (II-II, Q. 27, A. 4)

Aquinas admits that we do not attain to God with perfect knowledge. “It is impossible for any created intellect to comprehend God” (I, Q.12, A. 7) and “we do not know God immediately in this life, since “we see now through a glass, in a dark manner” (1 Corinthians 13:12).” As of yet, the Christian has precisely the same problem of reference as the atheist — how can he affirm the existence of that he, by definition, cannot comprehend? Aquinas argues that though he cannot be known in himself, “in this life God can be loved in Himself.” (I-II, Q. 27, A. 2) This follows from the nature of knowing and loving: “The act of a cognitive power is completed by the thing known being in the knower whereas the act of an appetitive power consists in the appetite being inclined towards the thing in itself” (II-II, Q. 27, A. 4). To update his language a little, we may say that while knowledge is always knowledge according to our concepts, desire is always according to the thing desired. We do not love a concept. We do not desire an image. We do not hate the definition of a thing. We love, desire and hate the thing itself: “The action of the intellect consists in this–that the idea of the thing understood is in the one who understands; while the act of the will consists in this–that the will is inclined to the thing itself as existing in itself.” (I, Q. 82, A. 4)

Love, then, is the means by which we grasp, touch or attain to God as he is, and knowledge, which says things about this God grasped in love, and according to our concepts, always relies on this love for its validity.

To sum up our argument:

1. If the claim that “God does not exist” is to say more than “X does not exist,” the word “God” must be grounded in an actual grasping of what God is.

2. But “God,” as described by the Christian tradition, is beyond the order of knowledge.

3. Any rejection of the existence of God within the order of knowledge (via concept) cannot, by definition, refer to God-beyond-the-order-of-knowledge.

4. Whereas the order of love attains to things “as they exist” and is not mediated by concepts.

5. Love of God — and more broadly, desire-for, hatred-of, attraction and repulsion to God — attains to God immediately, as He is, in a pre or supra-conceptual manner.

6. The order of love provides an adequate reference for our inadequate concepts as they are expressed in the order of knowledge. By the word “God” we point to God grasped as he is in love.

7. Only a reference to God as He is grasped in love would enable the atheist to reject the existence of God in a full and satisfactory manner, beyond a rejection of this or that inadequate concept.

If atheism really rejects God, and does so not merely by the inadequacy of conceptually rejecting a God-beyond-concepts, nor by the triviality of arguing for the non-existence of nothingness, nor by the immaturity of negating the invisible for not being visible, or the non-empirical for not being empirically testable, then it must be a rejection of God as he is made present in the pre-cognitive “desire of every human heart.” In this case the very disavowal of his existence as a known object is an affirmation of his pre-supposed existence for human consciousness qua desired, and the words “there is no God” always reveal an inescapable desire for the divine. The atheist cannot coherently say “God does not exist,” only “The God I love does not exist,” or “The God I hate does not exist.” This does not invalidate atheism, for it may still be true that there is “a desire for God written on every human heart,” one that enables a coherent atheism, which nevertheless finds no really existing object for that desire. It does, however, show the difficulty of holding and atheism that actually confronts and denies the God Christians claim exists.

Many apologies for the informal and preliminary nature of the argument, but I wanted to get it out there for criticism so I can work on it for the next 5 or 6 years.

October 25, 2015
Cocaine/Communion: The Holy Contradictions of David Ramirez
Next Post

November 20, 2015 ISIS, Liberal Democracy, and the Holy Catholic Church: A Call to Arms
Recent Comments
0 | Leave a Comment
"I don’t know what bible your reading, but if you really think Jesus wanted his ..."
George In Defense of Covering Catholic Churches ..."
"1. Conflates a child's sense of wonder with religion.2. Untold thousands of children have been ..."
Lucius 3 Arguments Atheists Aren’t Allowed To ..."
"Brilliant and mind opener. You're hot! Jajaja"
agusq1970 Modesty Sets Fire
"Great quality content man, I am really impressed with this one. Thanks for sharing this ..."
diksha gupta Culturally Catholic, Baby.
Browse Our Archives
Related posts from Bad Catholic