How to Ethnically Spice Your Bland Ideology

A few years ago I found out that the pro-choice group, Catholics for Choice, were using stock photos of young, hip minorities to promote the idea that their message of catholicly-supporting-abortion had the support of cool people. They even put up their ads in Kenya so, you know, “ethnic folk” would have something to relate to:

Shockingly, the Kenyan Catholic community were less than amped-up at being told what “good Catholics” do or do not do — and their resistance didn’t even take into account the stock photos’s life prior to representing a rubber-rocking, God-fearing African couple. 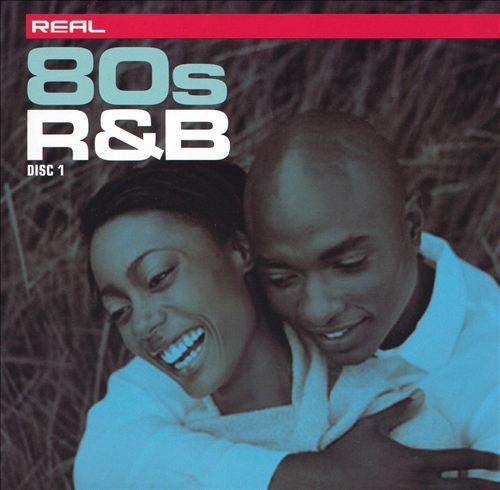 True, the use stock photos is pretty much ubiquitous, but when you superimpose “We believe in using condoms” in front of a smiling couple, it’s sort of pathetic to find out that there is no “we,” no couple, no belief, and, for all we know, no condoms — just the objectification of human beings for the ideological benefits of their skin color.

Now I’m no person of political importance, but I assumed that Catholics For Choice, a D.C. organization run by Dr. White-but-concerned-for-the-natives McGhee… 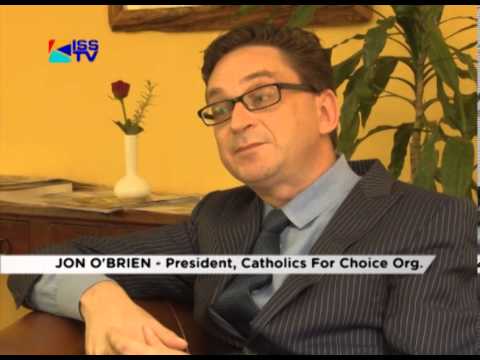 …I assumed they would stop using paid “ethnic” actors to pose for their ideological advertisements. At the very least, I hoped they would stop using the pictures they had already taken, not because Global Abortion is particularly skilled at moral discernment, but because racism is rarely in vogue. What I didn’t realize is that the blithe, piggish and cynical use of the human image is systemic to this self-proclaimed defender of human dignity. They didn’t stop at all. 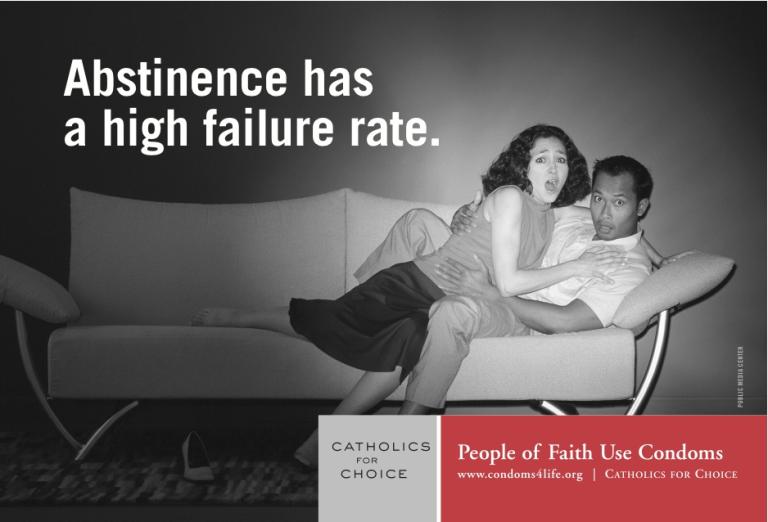 They just continued their use of “people of color” to add ethnic spice to their bland, D.C. culture-war: 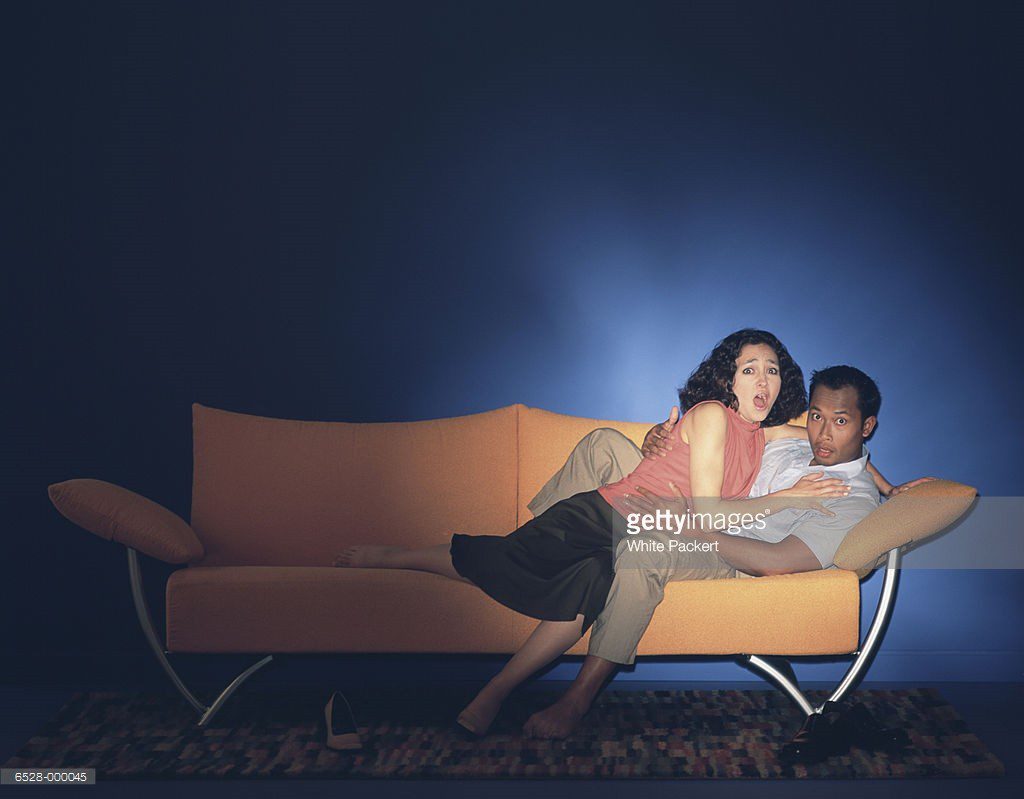 You see, they’ve got all sorts of diversity, even The Gays, look! The multi-purposed GayzTM! Here they are again!

When you’re an ideological organization, your use of the human face implies that human’s support of your ideology. Take, for instance, Catholics For Choice’s cover photo:

When this is the banner of your online presence, your message is simple: people all across the world support your message. In the specific case of Catholics for Choice, this must mean that there is international support for squishing together the Catholic tradition and the abortion-access tradition into a joyful, cross-cultural synthesis. They use it whenever they need to say “look how many people support our ideology,” as in:

Which is why zooming in is a huge disappointment. I’m almost certain every one of these pictures is a stock photo. They’re not even uniquely used, just copied whenever their color is needed: 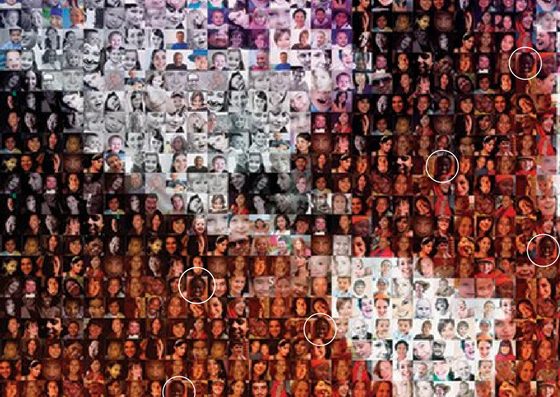 Most of the pictures seem to be of babies: 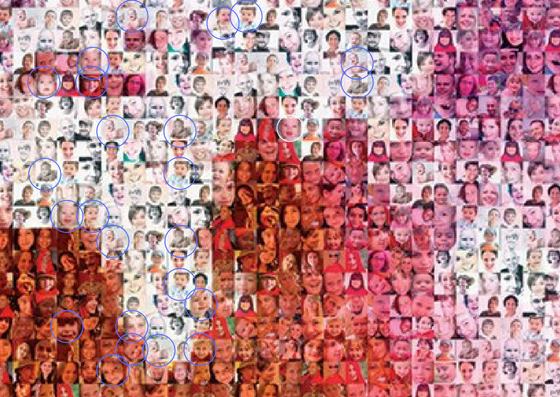 I guess “infant” is the primary demographic capable of comprehending and supporting the intellectual arguments of Catholics for Choice. This would be a forgivable short-cut if the image was used as representing “worldwide solidarity” — or something. But it’s not. It’s used to fundraise in their magazines. It’s used to refer the actual “us” in “The Bishops Do Not Speak For Us.” Once again, the image is used but the actual person remains absent.

My favorite example of this systemic and racist exploitation of the human image was Catholics for Choice’s Facebook post of April 2014:

This photo was amazing because it came without context — no tagline, no link to the magazine article it came from, no “we support childhood education for girls in Tanzania.” Just pure, uncaptioned “black people.” The photo is, of course, another stock photo (Corbis/ John Brecher, 2003), and I remain unconvinced that the good white folks of Catholics For Choice have ever met an African person outside of the guys they hired to put up their 80’s R&B ads. They seem to slap up a few of the “other races” every time their self-presentation looks too white. Seriously, have they ever met anyone outside of the Caucasian race willing to let them use their picture? I ask because their most recent campaign, “Abortion In Good Faith,” which looked for the “real Catholics” who support their corny dissent, consisted entirely of white ladies…

It makes sense that most of their propaganda is performed through cartoons. The cold air of the real world is unkind to these ideologues. Support for abortion is becoming a hackneyed, aging minority reaction against an population increasingly conscious of the reach and significance of human dignity. The eager Western imperialism that transplants a culture of child-killing onto those “other races” doesn’t come with pretty portraits. Luckily for Catholics for Choice, we live an age in which anyone with a laptop and a stock-image subscription can create an illusion of a youthful, joyful, global movement with broad, cross-demographic support.

The basic movement of the Internet-age is to convince people, not through reason, rarely, even, through rhetoric, but through a sense of belonging. We don’t rationally defend our arguments — we join “movements.” We don’t discuss the nature of gender or sexuality — we choose identities. We don’t develop parties to advocate for an ideal system of government — we rally against a Republican or a Democrat and call it political participation. One can manufacture the whole feeling and spirit of being a concerned citizen, activist, and informed populace by sharing a meme. One can manufacture the whole feeling of global solidarity by buying pictures of Asian people. There will be no revolution, because the energy revolution requires is shunted into moronically easy identity politics and social-media presence. Catholics for Choice are simply a good example of the zeitgeist. Their method is the method — the lazy posting of paid actors behind catchphrases to ensnare an unthinking public that wants to be on the side of justice and righteousness without doing a modicum of work or expending more than a minute of critical thought. All of it is extremely easy — but the genuinely Catholic choice is to absent oneself from “easy” public discourse and to engage the immense difficulty of showing that what you say is actually true.

December 29, 2016 Gender Identity is for Everyone
Recent Comments
0 | Leave a Comment
"All political art is lame?"
George Arnold Ghosts With Erections
"I don’t know what bible your reading, but if you really think Jesus wanted his ..."
George In Defense of Covering Catholic Churches ..."
"1. Conflates a child's sense of wonder with religion.2. Untold thousands of children have been ..."
Lucius 3 Arguments Atheists Aren’t Allowed To ..."
"Brilliant and mind opener. You're hot! Jajaja"
agusq1970 Modesty Sets Fire
Browse Our Archives
Related posts from Bad Catholic