Normally I’m not one for writing about my day-to-day life unless I feel there is some purpose or larger lesson to be gained from the story. But today was such a day that I feel the need to vomit my indignation into the blogosphere, so fair warning: there will be no moral to this story. Unless you count the title.

Our little boy, Liam, is six weeks old today. For the past three weeks he’s been struggling with really bad congestion that, last week, moved into his chest. His breathing was so labored last week that we had to take him to get chest x-rays and have been giving him albuterol breathing treatments to open up his lungs. The doctor suspected bronchiolitis, which is viral, so there was no treatment available except just lessening the symptoms. After five days of treatments, his breathing was better but his cough was worse. In fact, when he had coughing fits they were so bad that he choked, gagged, turned red and even stopped breathing for seconds at a time. Based on my description, the doctor suspected whooping cough when we brought him back in yesterday. Two notes on this: first, whooping cough is potentially deadly and infants who contract the disease generally have to be hospitalized. Second, he is too young to have received his vaccination for this. So the doctor ran a test and told me the results would be back in a week, and meanwhile prescribed antibiotics and spent quite a while going over symptoms with me that would necessitate a visit to the ER. I felt that she had done her job thoroughly and was worried about the possible whooping cough but felt relieved to be in such good hands.

This morning, it occurred to me that although Sienna (our oldest, who is in preschool) has been fully vaccinated against whooping cough, some of the other children in her class might not have been, so I called the school to make sure it was alright that she come today. She is showing absolutely no symptoms, but because whooping cough is so serious I wanted to err on the side of caution. I reasoned that if another child’s younger sibling had even a possible case of whooping cough, I would want their mother to be just as cautious, particularly since many of the kids in her class have infant and toddler siblings. The secretary at the school wasn’t really sure what to do either, so she called the nurse who works with them to ask, and advised me to call our doctor and ask their opinion. Our doctor said as long as Sienna is not showing any symptoms there is no reason to keep her at home. I called the school back to tell them this, and the secretary told me, in apologetic terms, that the nurse had contacted the health department, who wanted Sienna’s shot records, our name and phone number, the name and phone number of our doctor, and Liam’s medical records.

I was floored. I know that whooping cough is serious, but we weren’t even sure that he actually has it! I thought this was a bit of an overreaction but gave the secretary our number and asked her to have the health department call us. The woman who called first wanted to know why we had not immunized our son. Honestly, even though I’m pro-vaccine, I was immediately curt with her and on my guard. I believe in personal privacy and individual liberty, and I don’t think it’s anyone’s business why a person does or doesn’t choose to immunize their children; also, it’s not illegal to choose against vaccination, so there shouldn’t be any sort of public inquiry into the matter. I tersely informed her that at six weeks, Liam was too young for even the first DTap vaccine. She then wanted to know if the Ogre and I had been vaccinated in the past ten years; I informed her, still quite tersely, that we had vaccines in childhood and had no boosters since then. She requested that I have our pediatrician fax their office the shot records for Sienna and Charlotte. Here, I was a bit torn. On the one hand, I understand that this office is doing it’s best to try to monitor and stem what could be a potential outbreak of a disease that is highly contagious and very dangerous to children. On the other hand, how are my childrens’ shot records going to help them? I decided not to pick this particular fight; my spidey senses were tingling, and I had a feeling that this would not be the last “request” I would want to balk at. I figured that I would pick my battles here. The woman also informed me that she would be calling our pediatrician to make sure she had done the right test. I, in turn, informed her that our awesome pediatrician had just been named chief of pediatrics at the hospital, and I was pretty sure she knew what she was doing.

Meanwhile, poor little Sienna, who loves school, was following me around the house in her pigtails, all ready for school with her backpack on her back. I told her that I wasn’t sure if she was going to make it to school today but she insisted on keeping her backpack on, “just in case.”

An hour later the school called me back and told me that the health department had received Sienna’s shot records and said that she needed a pertussis booster before she could return to school.

I knew that this was wrong, so I called the health department, then the doctor’s office. The nurse said she was completely up to date and there was absolutely no reason for her to receive a booster, so I called the health department back. The woman kept insisting that Sienna had only received two vaccines at her 4 year check-up and not three. I told her that that wasn’t so. Finally, the woman said, “Oh. I guess they used a different name here. This vaccine did include the pertussis. Ok, she can go to school now.” I said “thanks” pretty sarcastically, since at this point it was ten minutes after the time I usually left our house to go pick Sienna up from school. Then the woman informed me that she had requested Liam’s medical records from the doctor, and they refused to release them without an official request. I asked her why she needed his records, and she said that they wanted to make sure the doctor had made an “accurate diagnosis.” Remember, at this point Liam has not been diagnosed with anything, it’s just a possibility! Then she asked if I could call and hurry the process up. I said no, and hung up.

About two hours later I got yet another phone call from the health department. She informed me that they had “made a decision in our case” and that both my husband and I are required to get boosters for pertussis, and all five of us are required to be on a 5-day antibiotic treatment. Then she asked if I thought I could get the pediatrician to write prescriptions for all of us.

That was it. I had had it. First of all, no one can require us to do anything. Second, these people aren’t even doctors. Third, they wanted me to ask a pediatrician to write prescriptions for two people who didn’t need them, and two people she doesn’t even treat.

So what did I do? I told her I would have to talk to my husband, called the Ogre, and gave him an update and her phone number. He, of course, was absolutely adamant that we would undergo no treatment unless we had all seen a doctor and the doctor recommended the treatment. He was already chomping at the bit before I hung up; there’s nothing the Ogre likes to deal with more than a clear infringement on basic civil rights.

We don’t call him the Ogre for nothing. 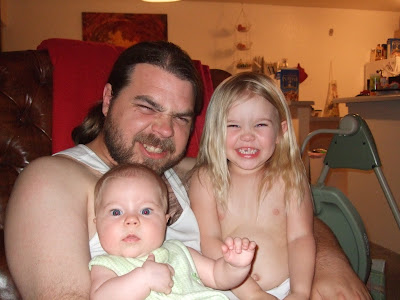 September 21, 2010
I Do Not Have the Cutest Children in the World
Next Post

September 26, 2010 It's Sunday and I Hate Baby-Wearing
Recent Comments
0 | Leave a Comment
Browse Our Archives
Related posts from Barefoot and Pregnant